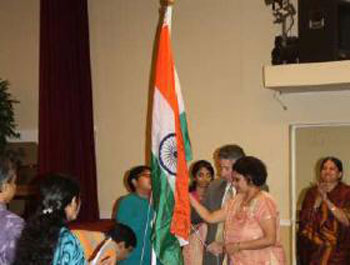 India has three national days out of its many public holidays: Republic Day (1/26), Independence Day (8/15), and Mahatma Gandhi’s birthday (10/2). India became formally independent from the British on August 15, 1947, with its new prime minister, Nehru, and the viceroy, Louis Mountbatten staying on as Governor General. In 1948 Chakravarti Rajagopalachari became the first Indian Governor General. On January 26, 1950 with the adoption of the Consitution, India became a republic with Dr. Rajendra Prasad as its first president, and the days of the Governor General and British representation were ended.

The grandest of the Republic Day parades in India takes place at the Rajpath in New Delhi. The Prime Minster lays a floral wreath at the Amar Jawan Jyoti, a memorial to unknown soldiers at the India Gate, followed by two minutes silence in memory of those who died in the Freedom Movement and in succeeding wars.

In Atlanta, IACA celebrated Republic Day at the Indian Cultural and Religious Center in Smyrna. IACA, founded in 1972, strives to bring Indian culture increasingly into the mainstream of the harmonious and ethnically diverse population of the USA.

Dr. Schall congratulated all for the celebration and took the opportunity to present a short video clip about Oglethorpe University’s IDEX program, sending students to India to work with schools in rural areas. He also talked about his fond memories from his own visit to India and his optimism about working with India to bring about stronger ties and understanding between the USA and India. Dr. Schall also shared information about the University’s upcoming Indian Art Exhibition in March.

A vote of thanks was provided by Nevedita Garabadu, acknowledging representatives from Sanatan Mandir, TAMA, GATS, Kannada Koota, NRI Pulse, VHP of America, Vibha, NASSTA, Gandhi Foundation, India Muslim Council, and Compassionate Care Hospice. Snacks were provided by Swapna restaurant and Shivam groceries, with chai from IACA volunteers Jashbhai Modi and Kanubhai Patel. Plans for the year to come were showcased for the many members of the Indian-American community. The presence of a number of community leaders and especially the youth who took part in the cultural performance made the occasion suitably festive and memorable!