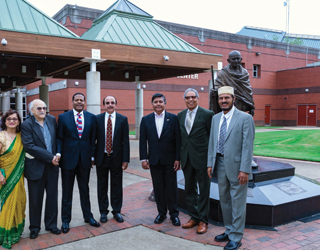 H. E. Ambassador Taranjit Sandhu was in Atlanta on July 7 on his inaugural visit to the city. On this visit, as he met the Indian diaspora, the Ambassador had an opportunity to pay homage to the Gandhi Statue at the Dr. Martin Luther King, Jr. National Historic Site. Hosted by the Gandhi Foundation USA in partnership with the Indian Consulate for the southeastern United States, the Ambassador spent an afternoon with the dedicated patrons.

His visit began with the walk on the Freedom Corridor pathway connecting MLK Boulevard to the King Center with cemented footprints in tiles making the path. These tiles have been named after the freedom fighters. He was led to the Gandhi statue by GFUSA Chairman Subash Razdan, GFUSA Board Members as well as the Honorable Dr. Swati Kulkarni, Consul General of the Indian Consulate in Atlanta. Ambassador was promptly greeted by Judy Forte, Superintendent of the National Park along with her dedicated team. He was also welcomed by Kwanza Hall, past Congressman and City Councilman; Reverend Brenson Elliott Woods of Ebenezer Baptist Church; and Isaac Farris,Dr. King’s nephew and past CEO of the King Center. Ambassador was assisted to rise and garland the statue. Dr. Kulkarni placed a garland at Gandhi’s feet. She was escorted by Asim Kumar and Mini Nair, both from the Consulate.

In welcome remarks, Judy Forte spoke first and acknowledged the decades of relationship between the two Apostles of Peace: Mahatma and Dr. King; and through them between the Indians and Americans, especially the African Americans. She then extended her welcome by presenting the Ambassador with a token of appreciation. The Ambassador reciprocated with a token as well.

Isaac Farris welcomed the Ambassador next as he reminisced on his visits with prior Ambassadors, and what this visit meant to the King Center and the King Family. Subash Razdan joined too with the suggestion that India consider installing a statue of Isaac Farris for his many contributions towards the Gandhi-King legacy.

GFUSA President Antony Thaliath then introduced the Ambassador along with his credentials.

This was followed by a welcome address by the Ambassador who recalled his interactions with the GFUSA Board in the past and how humbled he felt being on the hallowed grounds. He also briefly cited what this association means in the longstanding India-U.S. relationship, and how this friendship is organic.

The gathering,then, took the Freedom Walk from the Gandhi statue in the foyer of the King Center to the crypts of Dr. King and his wife, Coretta Scott-King. The Ambassador was greeted by Bonita Hampton-Smith, COO of the King Center; and Aimedra Kelley, Director of Communications at the Center. They brought greetings and a token of appreciation from Elder Bernice King, daughter of Dr. King and current CEO of the King Center. The Ambassador too had a reciprocal gift for King. He then proceeded to lay a peace wreath on the crypts and pay homage to the King couple.

The Ambassador spoke briefly about his experiences working with John Lewis and other lawmakers, the evolution of U.S.-India diplomatic relations over his career, and the similarities the U.S. shared with India where “there is democracy on the roads.”He touched on collaborations between Indian researchers and the National Institute of Health in U.S. He also spoke of India's role as a major emerging producer of vaccines and medications before encouraging Atlanta's Indian-American community to take advantage of new opportunities in the biomedical sectors and beyond. The Ambassador not only lauded Indian youth for leading the international community in STEM fields, but also urged many of the young go-getters present to begin thinking about the “unsaturated” market for talent and innovation in India.

Business leaders from a wide array of industries ranging from technology to transportation attended the event as well as young achievers from the Atlanta area. Both the Consul General and the Ambassador encouraged the young professionals present to connect with the network of Indian community leaders at the event and expressed their pride in Atlanta’s Indian American community.