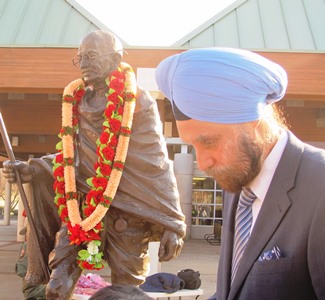 India’s Ambassador to the USA, Navtej Sarna, paid homage to the statue of Mahatma Gandhi at the Martin Luther King Jr. National Historic Site in Atlanta on February 13, 2017. Ambassador Sarna had been in South Carolina, and on the request of Nagesh Singh, Consul General of India in Atlanta, he visited Atlanta on his return journey to Washington. 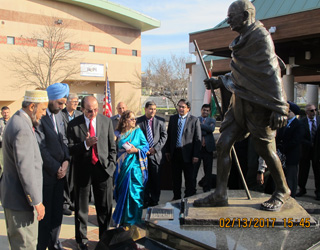 Antony Thaliath and Mohsin Bharmal brief the Ambassador on the history of the Gandhi statue at the MLK National Historic Site. (Photo: Ravi Ponangi)

Antony Thaliath, executive director of GFUSA, welcomed the gathering and spoke of the history of the installation of the Gandhi statue and the work of GFUSA. Raj Razdan, regional vice president of the National Federation of Indian American Associations (NFIA), introduced the ambassador and his wife.

In his brief address, Sarna highlighted the relevance of both Mahatma Gandhi and Dr. Martin Luther King, Jr. “It is always a moving sight to come to Mahatma Gandhi.” He said he is associated with the Mahatma Gandhi statue installed on Massachusetts Avenue in Washington, D.C., and it is really a good feeling to see people come, sit, and meditate. He said, “I am sure it is happening here in Atlanta. Any city would have to be proud to have a Mahatma Gandhi statue.” While congratulating the Gandhi Foundation of USA for their efforts in spreading the message of peace and nonviolence, the ambassador noted that Consul General Nagesh Singh is extremely committed to furthering the cause of Indian Americans in the region. The ambassador also assured the Gandhi Foundation of USA that the embassy and government will give fullest assistance in taking forward the plans of GFUSA for making Atlanta a “city of peace” with a three-point pillar. 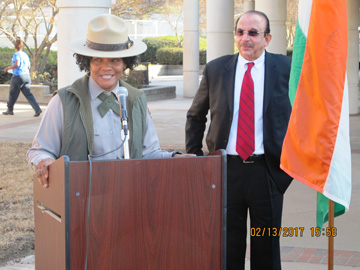 Judy Forte (Left) of the National Parks Service spoke about the long and lasting relationship the King National Historic Site has had with GFUSA. (Photo: Ravi Ponangi)

Hundreds of thousands of visitors come annually and pay homage to the statue of Mahatma Gandhi. Gandhi’s favorite bhajan “Raghupati Raghava Rajaram” was then sung by Hari and Prakash Gupta.

The Ambassador’s other engagements in Atlanta included an interview with CNN, a visit to the CDC, and a few meetings with industry and business leaders.

Amid reports that the Trump administration planned to cut down on H-1B visas, Ambassador Sarna told CNN that “The H-1B scheme has been crucial in making U.S. companies competitive globally in increasing their client base, in increasing their innovation. And it is the Indian tech industry, which has actually been creating jobs here (in the U.S.)”

Video:
“70% of H-1B visas, which are given to skilled workers, are granted to Indians.”
http://www.cnn.com/videos/world/2017/02/14/indian-ambassador-u-s-navtej-sarna-h1b-visa-sot.cnn
Link:
India’s Ambassador Visits Atlanta to Honor Gandhi and MLK
FEBRUARY 15, 2017 | PHIL BOLTON
http://www.globalatlanta.com/indias-ambassador-pays-first-visit-atlanta-honor-gandhi-mlk/