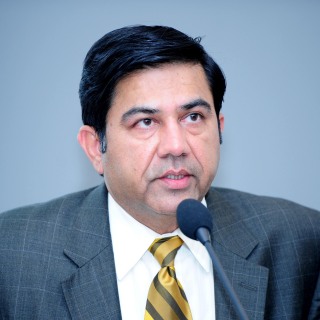 Ani Agnihotri, organizer, at the seminar “India’s Economic Reforms 2.0 and Opportunities for US Companies.” (Photo: Bytegraph)

In his October visit to New Delhi for a cabinet-level meeting, U.S. Secretary of the Treasury, Timothy Geithner said, “the reforms outlined by the government of India offer very promising paths to improving growth outcomes for the Indian economy…. They will be welcomed around the world.” Although some in India have accused the Indian government of selling out to the Americans by allowing foreign companies majority ownership of supermarkets and department stores, companies such as Walmart and Ikea, for example, are considering further investment in India. 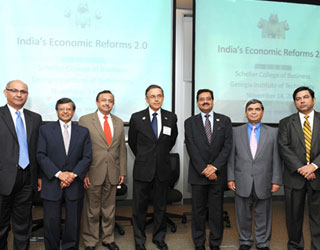 Mr. Lalit Dhingra leads publicly held NIIT Technologies in Americas, with focuses on insurance, financial services, travel, and media. Introduced as a leading practitioner, he spoke about retail and civilian aviation. Per NCAER, the 160 million middle class of India is expected to reach 267 million by 2015 and 547 million by 2025—compare the entire U.S. population of 311 million, 321 million by 2015, and 346 million by 2025! However, the largest sector is retail with 98% disorganized, mom-and-pop stores. Huge opportunities are in Tier-1 and -2 cities. With healthy competition, consumers get the best. Supply chain and logistics are industries that automatically go in with retail: “ROAR” = Rail, Ocean, Air, and Road.

Dr. Jagdish Sheth’s interests include demographics, consumer psychology, relationship marketing, competitive strategy, and geopolitics. Introduced as a master conceptualizer, he spoke of the new generation of Indians: boy meets girl in college (most still live at home rather than dorms), then couple move to new household, buying utensils, TV, motorcycle! Few buy from the neighborhood stores that had multigenerational relationships with the families. No delivery boy is used. They want supermarkets, branded stores, not unbranded rice or flour. Both must work to survive, so the wife has no time or proximity to family to learn cooking, cleaning, childcare. They outsource everything. They borrow as in American society, for mortgages, clothing, durable products, and services. By 2020, $3.6 trillion is expected in consumer spending, and the key factor is brand. Rural market is growing faster than urban since land has appreciated enormously. So, can you take your store to a rural market? U.S. products are strong: shampoo, Coke, restaurant franchises. Licensing is good, and joint ventures, even as a minority investor, since you can have a board member.

Mr. Shahid Charania, Managing Dir. for Emerging Markets for Equifax, focused on data acquisition to see if one consumer would be more of a company’s target than others. Unbanked Indians are 33%, and small businesses need banks for loans. Indian banks are 70% state owned, with less technology and innovation. Microfinance institutes are a first step. Although the credit card outlook is strong, there is more application and transaction fraud, and insurance claims are increasing 17%/year with fraud in claims. Opportunities: clean data; sophisticated predictive analytics to understand the value of an individual to a business; real time accessibility of data, using one phone to bank and buy; nonperforming assets; insurance policies and claims; changing prepaid telecom to postpaid.

Mr. Abhay Paranjape is Lockheed Martin Aeronautics’ National Executive for India, dealing with defense, aerospace, and manufacturing. Special ops aircraft against terrorism, for night, data collection, dropping paratroopers, and on unprepared runways were coming from Russia, but poor support led to using the USA. More sales may come. The focus is not just weapons, but border security, a national disaster management agency, and cyclone response at the Meteorological Department. Several thousand small unmanned aircraft are possible. Radars and sensors are needed, and general modernization of aging equipment. Climate change and energy issues are also linked to these areas. Partnerships would be useful to expand work such as that at Delhi Technological University, developing unmanned aircraft for urban surveillance.

In Q&A, the internationalization of Indian markets was pointed out: small businesses send a child abroad to study and return with ideas; hair products go to Africa; car steering wheels go all over the world.
What is India's energy strategy?—a mix of coal, hydro in Bhutan, wind (#4 or 5 in the world), nuclear, and natural gas.
Is there planning for natural disaster?—safe drinking water is an issue, with rain harvesting, river pollution being considered.
Major problem?—a) courts and justice system, so arbitration is needed—Singapore's Indian lawyers can be used for support, b) roads (bureaucracy).
Role of Bollywood?—a) there is 2-way business with Disney and Sony investing in India and Indians buying a chain of theaters in the U.S., b) content is a small point; technologies around the industry are the larger opportunity.

Website Bonus Feature
Video:
Gurcharan Das, author of The Difficulty of Being Good and the international bestseller India Unbound, delivered a talk based on his forthcoming book, India Grows at Night (while the government sleeps) at Emory University on September 6, 2012. His talk was part of the Halle Distinguished Fellows program.
http://www.youtube.com/watch?v=D1HJmHv9rOw
The Halle Institute's Distinguished Fellows program brings influential international personalities to the Emory campus for intensive interaction with faculty, staff and students, as well as with the Atlanta community. Learn more at http://halleinstitute.emory.edu.