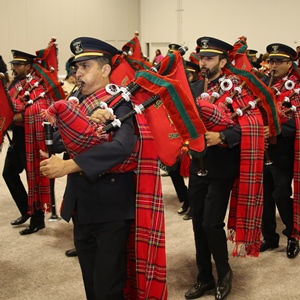 Approximately 14,000 Ismailis from Georgia and the surrounding states of Alabama, Tennessee, North Carolina, and South Carolina gathered at the Georgia International Convention Center (GICC) on July 11, 2017 to commemorate His Highness the Aga Khan’s Diamond Jubilee with a day of celebration, reflection, and prayers. This historic event marked his 60th year as Imam (spiritual leader), the 49th hereditary Imam of the Shia Ismaili Muslims and a direct descendant of Prophet Mohammed. Similar ceremonies were organized at eight other cities in the US, as well as numerous locations globally.

Festivities filled the decorated halls of the GICC, as families and friends arrived in their festive garbs ready to reconnect, reflect, rejoice, and commemorate the milestone event.

Thousands of volunteers helped plan the event including exhibitions, dance performances, and the homage ceremony. Attendees received a commemorative Jubilee Passport that guided them to explore the exhibits in the Reflections Lounge, adorned with artistic sculptures and fun activities for all ages. A key exhibit was My Journey to Homage, highlighting 60 years of Aga Khan’s leadership, and its impact on improving the quality of life of millions around the globe. 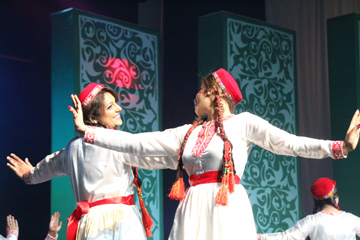 The drum beat sounds of the Pipe Band and senior’s Matki Band kicked off the One Jamat Launch. The highlight of the performance was the “Light upon Light” dance, accompanied by instrumental music and a colorful multimedia presentation which celebrated diversity and encouraged pluralism.

The much-awaited telecast viewing of the Diamond Jubilee Homage Ceremony provided an opportunity for the global Ismail community to virtually join present and past leaders in pledging spiritual allegiance and recommitting to the global work of the Aga Khan. Celebrations continued past midnight, with hours of singing and dancing accompanied by live orchestras from Atlanta and Memphis. This commemoration of the Diamond Jubilee year set the tone for many special programs to be held during the Jubilee year, including a Book Drive in Atlanta and many local and international projects for alleviation of poverty, early childhood education, civic engagement, perception of Islam in the West, and commitment to pluralism.

For more on the Aga Khan’s belief in tolerance and diversity as building blocks for peaceful societies, and on the humanitarian work of Ismailis locally and of the international Aga Khan Development Network, see ​below.

More on the Ismaili community’s local humanitarian projects:
The Diamond Jubilee is important because of the projects that the Aga Khan and the Ismaili community will initiate during the coming year aimed at improving the lives of the most marginalized in our societies, here at home as well as in other places. The Aga Khan spoke about these projects at the ceremony on Tuesday; they include alleviation of poverty, early childhood education, civic engagement, perception of Islam in the West and commitment to pluralism.

Book Drive:
The Diamond Jubilee celebrations will include a book drive in Atlanta. The books collected will be delivered in the coming days to a local Nonprofit promoting early childhood education (one of the Diamond Jubilee goals).

More on the Ismaili community’s footprint in Atlanta:
The Aga Khan Council for the SE partners with various civic institutions on numerous programs throughout the year that contribute to academic, cultural and interfaith exchange, including programs with the Georgia Institute of Tech, Georgia State University, Emory University, Carlos Museum, High Museum, Rialto Center for the Arts, Gwinnett County and Fulton County governments, Interfaith Community Initiatives, Faith Alliance of Metro Atlanta, World, Affairs Council Atlanta, and many others.

The Ismaili community is also very active in service initiatives and projects including working with the Atlanta Food Bank, Hosea Helps, Med Share, City festivals and serves on advisory boards in academia, culture and economics.

More on the Aga Khan:
The Aga Khan succeeded his grandfather, Sir Sultan Mahomed Shah Aga Khan, sixty years ago, at the age of 20. Today, he guides a diverse global community of approximately 15 million Shia Ismaili Muslims around the world. In Islam’s ethical tradition, as a religious leader, he not only interprets the faith but also has a responsibility to help improve the quality of life of the community and the societies among which the Ismailis live.

The Aga Khan believes diversity should inspire, not divide, and that enhancing pluralism is a crucial building block for constructing peaceful and successful societies. He has enhanced dialogue and fostered collaboration between faith communities and has been a strong advocate for an improved understanding of Islam. His Highness The Aga Khan emphasizes Islam as a thinking, spiritual faith that teaches compassion and tolerance and upholds the dignity of mankind.

More on the Aga Khan Development Network:
The Aga Khan is the Founder and Chairman of the Aga Khan Development Network (AKDN), one of the most comprehensive development networks in the world today, operating in over 30 countries, and transforming the quality of life for millions of people around the world. The organization operates more than 200 health care institutions, 2 universities spanning 6 countries, and 200 schools and school improvement programs in some of the most remote and poorest parts of the developing world. Each year, the AKDN provides quality health care to five million people, improves teaching for two million students from preschool to university level, generates electricity for ten million people, and helps eight million to achieve greater food security, raise household incomes, and improve their overall quality of life.

The AKDN also operates over 90 project companies in post-conflict and transitional economies, helping to lay the foundations of economic development and stability in these countries, ranging from a large-scale hydropower project in Uganda to a mobile phone company in Afghanistan. Surpluses from these activities are re-invested into AKDN development projects.

New projects and initiatives to be dedicated during the Diamond Jubilee year include coordinated programs in developing countries to alleviate poverty, increased access to finance for education, health and housing, early childhood development, and infrastructure (principally, water, energy and telecommunications). Additional resources and capacity will be added to the institutions of the AKDN, including the Aga Khan University and the University of Central Asia.