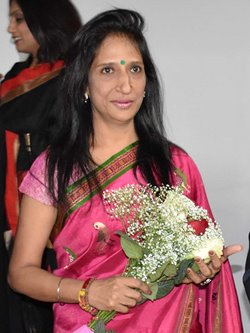 The Sai Adult Day Care Center Hall at Global Mall, Norcross was packed on April 15, 2016 with Atlanta’s Gujarati community members, and graced by the presence of leading dignitaries gathered to listen to the multitalented inspirational speaker Kaajal Oza Vaidya from Ahmedabad, Gujarat. The talk show was arranged by Mustafa Ajmeri and Chirag Thakker, with Dipa Shah, Sanjay Pandya, and Nimesh Sevak. 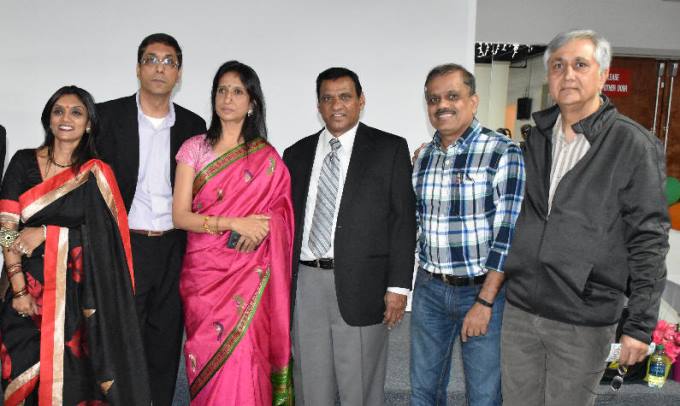 Dipa Shah, a writer, helped to host Kaajal and also emceed the program with both verve and composure. She introduced Kaajal as an award-winning author of 56 books, a newspaper columnist; a gifted orator, screenwriter, radio show host, and visiting faculty for creative writing at Gujarat University. Kaajal is known for her radical thinking and fearless truthful reporting and is a role-model for the young generation. She is well-versed in Gujarati, Hindi, and English.

Dr. Bhagirath Majmudar, himself a talented poet, writer, playwright, and performer, lauded Kaajal as “indeed a charismatic, electrifying orator gifted with spontaneous humor and a razor sharp wit.” Dr. Jagdish Sheth, also an author of several best-selling books and winner of many awards and honors, thanked Kaajal for coming to Atlanta, wished her well on her remaining US trip, and presented her with a flower bouquet amidst loud cheering applause from the audience.

Kaajal shared insightful nuggets from the Mahabharata, Bhagavada Gita, and Ramayana, briefly touching upon roles of Krishna, Arjun, Draupadi, Karna, etc., in crucial episodes narrated in these epics. She also talked about instilling good values, and the enthusiastic audience listened raptly, occasionally breaking into laughter and clapping when she mentioned a lighthearted quip or anecdote. She advised all to practice Sanatan Dharma and opined that the young generation is confused about religion and Hinduism because of misinformation and misguidance. “Religion is not rituals. Performing rituals without understanding the ‘how’ and ‘why’ is meaningless.” She explained that good karma will reap good rewards sooner or later. She recommended reading the Gita because it is like a manual for life’s management skills. “When you pray, trust in God. When you get on a plane, do you ask the pilot to show his license? No, because you trust him.”

Kaajal advised the attendees to control the acquisitive spirit. “Usually once a year we do spring cleaning. At that time, instead of trashing some of the worthless possessions, we cling to them under the pretext of ‘sentimental value.’ This is repeated till one day, a young person in the family takes charge and dumps it all.” (Laughter). “Just as a climber sheds weighty baggage in order to survive while climbing up, as we advance in age, we, too, should get rid of bad memories and negative thoughts in our mind for our wellbeing.“

She spoke about the sanctity of marriage. The three important sanskars (sacraments) are Janma, Dwij, and Lagna sanskar. “There has to be mutual love, respect, loyalty, trust, and tolerance between husband and wife. Being argumentative, blaming each other over trifling matters, shouting loud, not communicating with each other, etc., can have adverse effects on marital happiness. Control your ego, your pride, and your temper. If you lose your temper and vent your anger on someone, after cooling down, go and apologize and beg for forgiveness. Try to control your emotions and live a balanced life....To ensure a happy marriage, try and compliment your life partner as frequently as you can. Some husbands seldom compliment their wives but are quick to compliment other ladies on their looks, dress, cooking, etc. It is like saving your best crockery for guests only!” (Laughter).

She shared her thoughts on parent-child bonding. “Overprotective parents pamper their children even when they need disciplining. They defend them even when they are guilty of wrongdoing. She stressed three points:
1. Do not become friends with your children. Be friendly parents but retain your authority as parents.
2. Do not get angry and criticize, but talk gently and resolve the problem.
3. Forgive your children for whatever mistake they make. Make allowance for their age and circumstances. 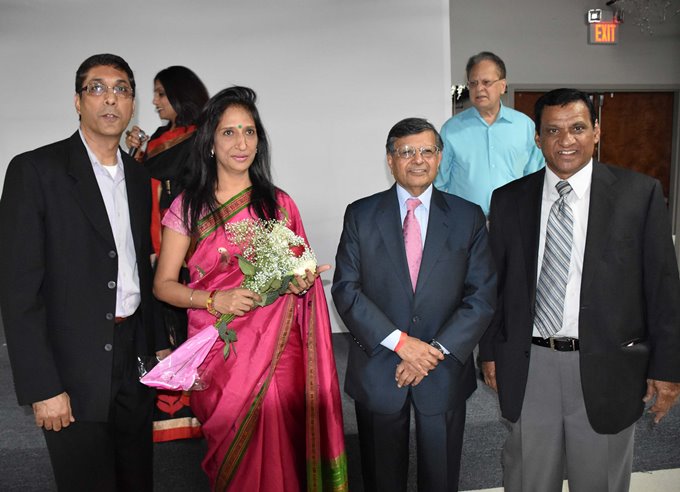 The overuse of addictive social media is disrupting personal lives and health. “37% of divorces are caused by this. People who indulge in it do not realize that these virtual contacts are not real. Let children have privacy and space, but remember to spend some quality time with them. Have at least a daily meal together and keep all the electronic gadgets away!”

During the interesting and lively Q&A session, Kajal answered questions from the audience and media representatives. When asked, “Who is your role model?” she quipped “Me!”

After the talk, Dr. Majmudar shared, “The food which she served on a Gujarati platter was not warmed up leftovers but a creative cuisine. Her distinct viewpoints on Bhagavad-Gita, Bhishma, and Shri Krishna attained acclaim. Her transparency of truthfulness came out when she unhesitatingly shared her estranged relationship with her father, an unusual trait in Indian culture. She mesmerized the audience with her uninhibited boldness, courage of conviction, and feelings flowing like fluid. But I feel that she could have left out some of the unconnected anecdotes which may have helped sweeten the milk but in my view diluted some of the situational problems she discussed. It would have been better if she had spent that time in adding more substance to dealing with problems in marital relationships and parent-child relationships. Similarly in portraying Karna’s character in Mahabharata, which is poignantly portrayed in the Sanskrit play “Venisamhara,” she missed a splendid opportunity to tap her rich resources of compassion, comprehension, and analytical judgement to illuminate the contrasts in Krishna and Karna, as Krishna was raised with abundant love and approval, whereas Karna perpetually carried a stigma of abandonment and put downs. In sum, we are all very grateful to Kaajal for visiting us and give a very interesting talk. It was a productive evening where a worthy speaker found an appreciative and attentive audience.” 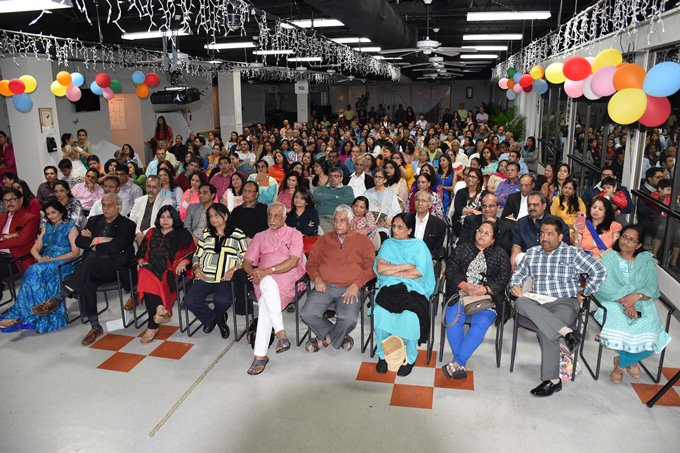 Thanks were given by Mustafa and Chirag to Ashish Desai of Sai Adult Day Care Center for kindly letting use of the hall, sponsors, dignitary guests, media representatives including Anjali Chhabria from TV Asia, photographer Darshan Shah, and volunteers Kaushik (Keith) Patel, Mahendra Ganatra, Nimesh Sevak, and Sanjay Pandya, to name a few.