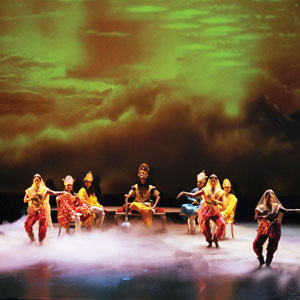 This year, Kamal Mohanty again hosted the show, which began with Ganesh Vandana—beautiful Ganesh poses bringing small Ganeshas to life on stage. One parent said she had tears in her eyes watching her little daughter perform Ganesha. Kathak pieces followed, then dances to folk and filmi music by the same students.

The centerpiece of the program, Mahishasur Mardini, took the audience into the mythical roots of Indian culture. Beautifully narrated in Hindi and performed in Kathak, the Kathakar (Kathak dancers) told the story of Goddess Durga. The demon Mahishasur, through years of praying, received a blessing from Lord Brahma that no man or God could kill him—but once gaining this power he started ravaging the whole world and killing people, and finally he wanted to uproot the Gods, too.

Forty-five performers presented this forty minute show. Beautiful music and costumes, background that gelled into the stage performance, light effects, and above all the Kathak performance by Aparna's students resulted in a performance that left the audience spellbound. In their makeup, the mythical characters, Indra, Durga, Mahishasur, Kali, demons and devtas seemed to come alive on the stage. Aparna Sharma worked for over a month in India with musicians and artists to capture her imagination in the narration and music.

In their Kathak-Flamenco jugalbandi, Aparna Sharma and Cara Wheeler showed the historical connection between the dance forms. Kamal Mohanty explained: Dance is an expression of human emotion. Music and dance know no boundaries. They originate, merge, and bring about new forms. Nearly 600 years ago (in 1447), Gypsies from Punjab arrived in Spain. Over the years, the Gypsies combined the Kathak brought from India with the culture and music that the Moors had brought to Spain earlier, and a new Gypsy dance was born, Flamenco. In this jugalbandi, first each performed their own dance form, and then Aparna performed Flamenco while Cara performed Kathak. The wonder of this historical connection was very clear in the steps and the rhythm of their performances, and had the capacity audience respond with gusto.