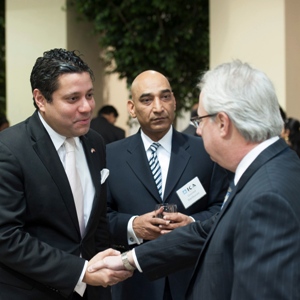 The Ambassador of Trinidad and Tobago HE Dr. Neal Parsan being introduced to Georgia Attorney General Samuel Olens, both of whom delivered keynotes at the dinner.
(All photos: David Caselli at Kennesaw State University)

Top India scholars and experts shared their knowledge on India’s social, economic, and political culture, and on U.S.-India relations, in a daylong forum at Kennesaw State University (KSU)’s first India Day on Friday, January 24, 2014. The event was organized by KSU’s India China America (ICA) Institute in the Michael J. Coles College of Business, in partnership with the Consulate of India in Atlanta, Kennesaw State’s Indian Faculty and Staff Association (IFSA), and the Institute for Global Initiatives (IGI). 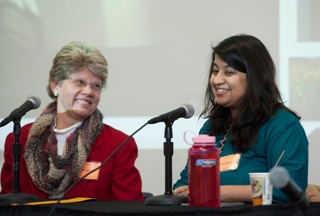 Linda Johnson, Exec. Dir. of KSU's Siegel Institute for Leadership, Ethics, & Character, and Aparna Bhattacharya, Exec. Dir. of Raksha led a discussion on women and the social and cultural issues they encounter in India compared to the U.S. (Photo: David Caselli at Kennesaw State University).

India has a great influence on the world, not only as the largest democracy, but also as one of the largest food producers and for its human resource strength in information technology, declared Consul General of India in Atlanta, Ajit Kumar. “Both countries, India and the U.S., are committed to building peace and prosperity, and they converge on a majority of issues,” Kumar said. “The gender and social gaps are widening. It challenges us to rededicate ourselves to reunite the world.” 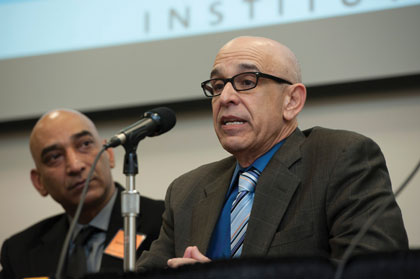 Jorge Fernandez of the Metro Atlanta Chamber of Commerce (right) with Govind Hariharan, executive director of the ICA Institute. Opening remarks were by Fernandez, who spoke about the importance of India. 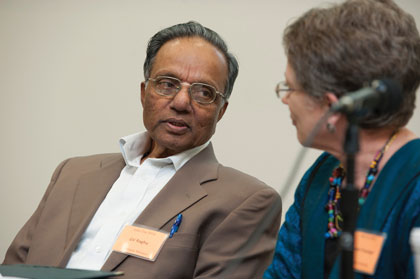 Panel discussions focused on key issues relevant to India, including religion, holistic medicine, business, women’s issues, and information technology. Representatives of religious practices—Sikhism, Sufism, Hinduism, and Christianity—shared their insights on what religion means to them and how it is practiced in the Indian context, while panelists on women and social issues explored some of the employment issues that women face in India's marketplace. Four KSU student dancers from the College of the Arts performed a Bharathanatyam dance. From doing business in India to understanding the Indian diaspora, India Day offered plenty of interaction. 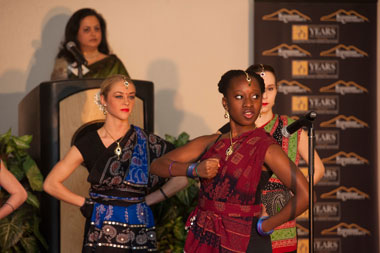 “I think India Day gave me a better cultural understanding,” said Amanda Ray, a senior majoring in English and philosophy. She came to “catch a few of the panels” but stayed almost the entire day, intrigued by how women are combating gender issues like domestic abuse, and learning more about the use of holistic remedies in India.

With more than one billion living in India, Kumar noted, there is an abundant exchange of students and scholars, with nearly 100,000 Indians studying in the U.S. Several KSU students who studied, researched, or worked in India as part of an Education Abroad program talked about their experiences during the panel discussions.

The ideas of open dialogue and new partnerships sparked the planning for India Day. “Our mission at the India China America Institute is to provide greater understanding and greater collaboration in the areas of trade and business,” said Govind Hariharan, executive director of the ICA Institute. KSU is the third-largest university in Georgia, offering 90 graduate and undergraduate degrees, including doctorates in education, business, and nursing and a Ph.D. in international conflict management. It has a student population of more than 24,600 from 130 countries. Both students and the community benefited from this event.

Ambassador Neil Parsan of Trinidad and Tobago and his wife Lucia Mayers-Parsan and their 3-year-old daughter Amaya arrived in Washington during one of the hotter summers in recent memory.
Lucia is Roman Catholic but her husband was brought up as a Hindu—the two main religions in Trinidad and Tobago. The islands are extremely multicultural, with a mix of religions and ethnicities.
Many waves of indentured workers have landed on these sunny isles over the decades, the largest among them being East Indians and Africans, as well as Europeans, Chinese and even the Lebanese.
http://www.zoominfo.com/p/Lucia-Mayers-Parsan/1771808644

Conference on Indian diaspora in Trinidad and Tobago
An Indian diaspora conference will be in Port-of-Spain from July 11-13, 2014. Trinidad and Tobago's East Indian population, originally sourced from India, mainly from the states of Uttar Pradesh and Bihar between 1845 to 1917, makes up 44 per cent of the country's total population.
http://timesofindia.indiatimes.com/nri/other-news/Trinidad-to-host-Indian-diaspora-conference/articleshow/30513334.cms