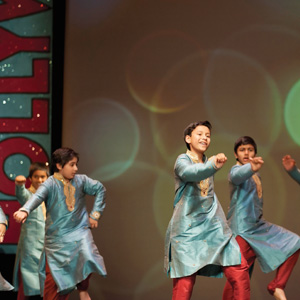 Kruti Dance Academy’s sweet sixteen recital was celebrated with its students, families, friends, and sponsors at the Cobb Energy and Performing Arts Center on May 22, 2011. The theme “From Hollywood to Bollywood” turned out not just a theme, but an actual reality for Kruti’s accomplished founder and director Dinaben Sheth, creative director Shemoni Parekh and its talented students when they had seven dazzling performances in Chak Dhoom Dhoom, one of India’s popular dance talent show.

As all the Kruti ‘Stars’ arrived to share their talent at its 16th annual recital, the energy was exuberant. The homemade stage backdrop glittered with signage: “Hollywood” to “Bollywood,” befitting—and also “HB” standing for “Happy Birthday”! While sweet sixteen is a transitional coming of age period, familiar to all, little did Kruti know what an unbelievable journey awaited during its 16th year. Not only did they uphold the highest standards in culture and values, they were recognized and applauded by world class dancers and judges for it, too.

Shemoni Parekh warmly welcomed all to the celebration and emceed the show, which was split into three segments: a breathtaking kaleidoscope of 30 entertaining and synchronized dances depicting tradition and style by the Kruti Tots, Kruti Youngsters and Kruti Teens, of diverse nationalities, age groups and talent—a gushing fountain of innovative and creative choreography, fetching colors, shimmering and traditional Indian and contemporary costumes and facial and hair adornments.

The audience was treated to an imaginatively choreographed “Shiv Tandava” dance, with a cast of almost fifty ‘Stars,’ who set the stage on fire with flawless moves, pounding beats, precise formations, synchronized hand movements and artistry that elicited an equally enthusiastic applause. The dance was choreographed tirelessly by Dinaben Sheth.

Shemoni Parekh is already building on her mother, Dinaben Sheth’s foundation. Dinaben proudly relayed that under Shemoni’s leadership, the Academy will expand its awareness and impact beyond the local community and lead it culturally into the remainder of the 21st Century, including its presence on the internet, website, Facebook, You Tube and Twitter Tweets, which is indeed a great transition for the tots, teens and seniors! Shemoni is eagerly and energetically taking the students through the metamorphosis and training of learning Bollywood dances, turning them from novice to experts.