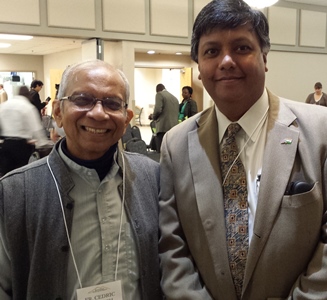 Keynote speaker Rev. Fr. Cedric Prakash from India, who spoke on “Challenges in Responding to the Rights of Religious Minorities,” with Viren Mayani, who participated in a panel on “World Religions, Conflicts, and Reconciliation.”

Kennesaw State University’s Center for Conflict Management hosted its 6th International Conference on: March 28-30, 2016. Packed with scholars, students, and the public, the audience got a glimpse of how complex the phenomenon of religion is. Although there is no single, globally acceptable definition of religion, most people think they know it. How can we make sense of something that unites people and communities, and also separates them? How could something that promises believers peace and salvation also be the source of so much discontent, violence, and even war? With the ever growing need of truly understanding the varied faiths that the people of the world believe in and live by, the Conference did not claim to be a solution to all issues in question, but provided a platform: for understanding, for questions and answers, for deeper contextual reference to why things are said and done, the way they are, and more.

Day 2 had concurrent sessions: “Human Rights & Reconciliation,” which included presentations on (a) women’s rights and mediated religion in Africa, (b) humans are equal in creation and peace is divine order, (c) religious vs. secular human rights organizations, and (d) sources of radical self: extremism, modernity, and religion.

“Religious-based conflicts: Boko Haram” included (a) greed & grievances in the name of religious fundamentalism, and more.

Plenary session #2 had speakers Viren Mayani, a practicing Jain who has been invited to speak on religious tolerance and understanding different faiths; Zenkai Taiun Michael Elliston, Abbot of the Atlanta Soto Zen Center; Julian Godwin of Soka Gakkai International; and a speaker on the Bahai Faith.

Sessions after lunch covered a variety of issues: peacebuilding strategies; conflict analysis for Iraq after the 2003 invasion; co-religionists and intervention; land use and religious movement; limits of law in resolving religious conflicts; mysticism and religious tolerance; Role of the Catholic Church in managing interstate conflict – examination of the intervention of Pope Francis in Cuba-USA relations; water crises, and much more.

On the final day, Srikanth Mallavarapu, Department of English, Roanoke College, participated in the session on “Secular Ethics Approach to Interfaith Conflict, Dialogue, Peace, & Reconciliation.” Another session considered reconciliation and forgiveness. Ratna Ghosh, Department of Integrated Studies in Education, McGill University, Canada, participated in “Confronting Religion and Extremism: Pedagogical Challenges.” The session on Islam in the World included 1) “Halal in Context: A Reconciliation of Muslim Food Ways and Animal Welfare in Islam” by Sherrie Alexander, Department of Anthropology, University of Alabama at Birmingham; 2) “Islamic Liberation Theology in Countering State Violence in the US War on Terror” by Sharmin Sadequee, Department of Anthropology, University of Michigan; and 3) “Islamic Reconciliation Model: Principles & Practice by Muslim Americans” by Mazida Khan, Interdisciplinary Studies Department, Kennesaw State University. Rev. Fr. Cedric Prakash of India gave his Keynote Address, “Challenges in Responding to the Rights of Religious Minorities,” speaking of his experiences working with refugees from all over the world.

The conference was timely, pertaining to growing religion-based strife and conflicts throughout the world, and the price that humanity is paying for it. The answer does not seem close at hand, and academia is challenged. KSU continues to engage and lead its campus communities with thoughtful discussions on current grave international issues.