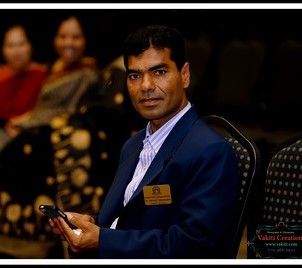 The event started at 5:10 pm and the hall was still full at 11:30 pm. Celebrations began with lighting of the lamp by Neelya Bhavani (Telugu movie artist), singer Adarshini, and GATeS women, followed by Janardhan Pannela singing “Jaya Jaya he Telangana” with the Executive Committee and Board. Organizers had a huge lineup of cultural activities, with 200+ excellent performers. The Inaugural Song was specially composed for the event. 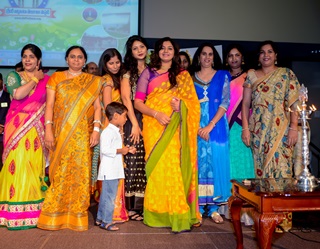 Sri Ramchander Rao Naraparaju, MLC and leading lawyer from Telangana, was guest of honor. He spoke in length about the Telangana movement and the tasks ahead in building up the new state. Sri T. Harish Rao, Minister of Irrigation, Government of Telangana, sent a recorded video message and reminded about the role of NRIs in the fight for Telangana and praised GATeS for its activities. Sri A. Indrakaran Reddy, Minister of Law, Housing, & Endowments, Telangana sent his wishes in a recorded video. Sri Talasani Srinivas Yadav, Minister of Telangana, addressed the gathering thru live video link. Consul Srinivasan of the Atlanta Consulate also spoke.

President Dr. Venkat Veeraneni thanked scores of volunteers who worked hundreds of hours over the past 3 months to make the day memorable. Dr. Sreeni Gangasani, Chairman of the Board, explained the mission of GATeS and thanked sponsors, including grand sponsor Dr. Prem Reddy.