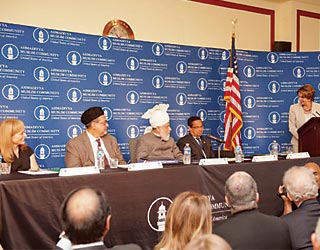 From Right: Minority Leader Nancy Pelosi (D); Congressman Keith Ellison; Khalifa of Islam, Mirza Masroor Ahmad; Ameer of USA, Dr. Ahsanullah Zafar; and others on Capital Hill in a meeting for the Khalifah's speech on peace.

Blood drives were held by the Ahmadiyya Muslim Community around Georgia for a month to give the gift of life to thousands of people: drives were scheduled in the latter part of August, 2012 for Lucky Shoals Park in Norcross, UGA – Athens, and the Tanger Outlets in Commerce, and in the beginning of September (until 9/11) for the Mall of Georgia – Buford, Town Center Mall – Kennesaw, and Discover Mills Mall – Lawrenceville. Anyone could also donate at any Red Cross donation center with the code M4Life until 9/11 as part of this drive. 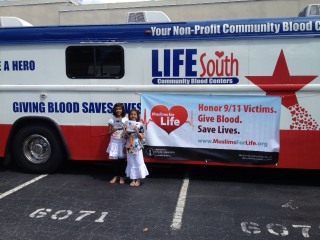 The invitation had gone out for everyone to join hands with the Ahmadiyya Muslim Community in this project in remembrance of those who died on September 11th, 2001, a day which changed the world.

The organizers categorically denounce any form of extremism or terrorism and its members try to live by the community motto: ‘Love for All, Hatred for None’. This is illustrated by the fact that the community’s fifth Khalifa, His Holiness Mirza Masroor Ahmad, recently finished his tour of the USA, which included a visit to Washington, D.C., where he delivered an address titled ‘The Path to Peace – Just Relations between Nations’ to an audience of more than 30 members of the U.S. Congress. A Resolution by the House of Representatives noted “his commitment to world peace, justice, nonviolence, human rights, religious freedom and democracy.” 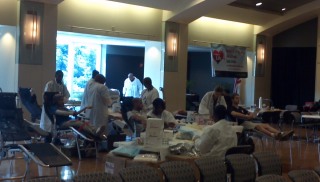 The community's ‘Muslims for Life’ campaign was launched last year on the tenth anniversary of 9/11 in an attempt to cleanse the image of Islam as a violent religion tarnished by the actions of a few who called themselves Muslim and masterminded this attack.

Last year the community had a total of 278 blood drives in 168 cities around the country, surpassing its goal of 10,000 blood units, ending with more than 11,000 units nationwide in the month of September. 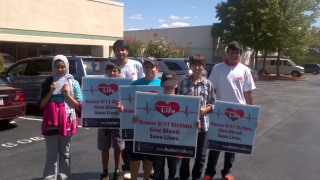 This year the organizers raised the bar and the national target was set at 11,000 units in one month from August 11th to September 11th. The Georgia chapter was pleased to have raised 1,690 pints towards this goal, exceeding last year's total of 1,225 pints. Georgians who believe in the sanctity of life were thanked for contributing and are encouraged to continue by donating blood, sponsoring a blood drive, or just spreading the word.