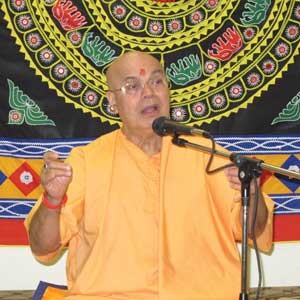 Five days of yoga classes and spiritual discourses conducted by Swami Adhyatmanandaji from July 26 to 30, 2012 in Global Mall drew the attention of young, old, and children, from all walks of life. People from diverse nations and cultures participated enthusiastically.

About seventy yoga enthusiasts enjoyed systematic and scientific learning, both indoors and outdoors, in the morning sessions. Swamiji taught essential but light flexibility exercises, yogic poses, and pranayam to benefit all and particularly those in sitting positions for long hours at computers. Simple variations of Fish Pose, Cobra, Locust, Camel, Half Bow, Full Bow, Sun Salute (Surya namaskar), and more were taught as were regular Posture, Head Stand, Shoulder Stand, Fish, and Plow, with detailed explanation of the science of breathing and the art of relaxation. 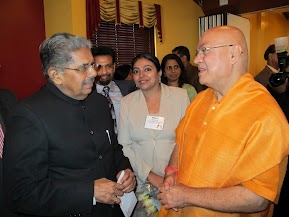 Swamiji at a lunch organized in honor of Vayalar Ravi, India’s Cabinet Minister of Overseas Indian Affairs, in Atlanta.

Evening topics included happy living, spiritual practice (sadhana), stress management, and learning from Bhagavata. Learning from Ramayana was the topic at the Hindu temple of Atlanta, Riverdale on Sunday, July 29. There Swamiji was received with all honors with Purna Kumbha Swagatham. Swamiji said that attractive stories were employed by the Hindu Rishis and sages for teaching morality, philosophy, and religion for use in daily life. Stories are like sugar-coated tablets; study of the Bhagavata inspires devotion, and instills knowledge and vairagya (dispassion), while the Ramayana teaches the supreme importance of righteousness for the unfolding of the latent divinity in man and for peace and prosperity in this world. The Ramayana contains object lessons for husbands and wives, parents and children, brothers and sisters, friends and enemies. 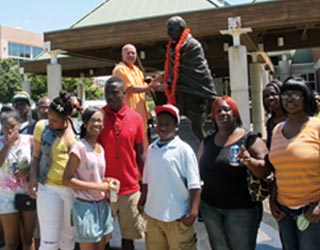 Swamiji paying tribute to Mahatma Gandhi while visitors to King Center look on.

Swamiji was invited to the lunch organized in honor of Vayalar Ravi, India’s Cabinet Minister of Overseas Indian Affairs, and hosted by Ajit Kumar, Consul General of India in Atlanta. Swamiji’s stay in Atlanta was hectic with attending programs, visiting institutions and devotees’ houses. He inaugurated Anita Bhagavathula's arangetram of Kuchipudi dance, visited Sri Swaminarayan (BAPS) temple in Lilburn and had satsang with BAPS Swamijis, addressed Rotarians of Druid Hills Rotary club where he exchanged views with Rotary International District 6900 Governor Cheryl Greenway and others, and paid homage to Mahatma Gandhi at the statue at the King Historic Site. Swamiji explained a couple of incidents in the life of Mahatma Gandhi to young African-American students who gathered around the statue before touring the site. Swamiji also gave a TV interview for a local channel. 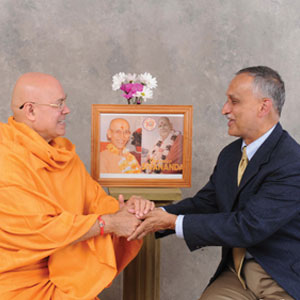 Simple formula for Blissful Living? In his words, “Be good, do good, be kind, be compassionate, serve, love, be generous, be pure, and be regular in your prayer and selfless service.” Pujya Swamiji’s said that yoga is not a religious thing, and chanting OM calms and energizes the mind.

Swami Adhyatmananda, spiritual head and president of Sivananda Ashram, Ahmedabad belongs to the lineage of Swami Sivananda of Rishikesh. It is always a treat to listen to him, with his useful tips and anecdotes and his dynamic personality. Swamiji has conducted more than 800 camps around the world and is a frequent speaker. He is currently on a 2-month tour to Germany, the USA, and Canada.