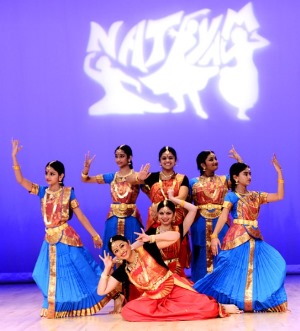 On March 12, 2016, students of Preeti Vinayak at the Natyam Arts Academy performed in a two-hour presentation titled, “Margam” – The Chosen Path, at North Atlanta High School. Natyam Arts Academy (NAA) celebrated 16 years of serving the Dunwoody area as a school for Bharatanatyam and Carnatic music. Pieces from the allarippu to thillana were presented in sequence of increasing degree of difficulty by over 50 dancers. The entire program was dedicated to Preeti’s guru, Sri. M. V. Narasimhachari, and the legacy he has left behind with his incredible choreography.

Sainath Rajendrakumar served at the master of ceremonies and deftly guided the audience through the program. The stage was set with the NAA logo projected and colorful festive lights. The youngest students of the Academy, dressed in vibrant green and red costumes, presented bharatham. Beginner level students presented a set of pieces titled “Ganesha vandanam,” clad in red costumes. This was followed by 14 intermediate level dancers who confidently presented the allarippu, “Ganesha kowthuvam” and a shabdam. From there on senior students took over the repertoire and began with a fast paced jatiswaram.

The pièce de résistance of the show was the varnam. Set to ragam Thodi and Adi talam, the varnam showcased four elaborate and intricate jatis that were expertly vocalized and choreographed by Preeti through her precise nattuvangam. Her students did apt justice to these jatis, which was evident through thunderous applause after each one. Seven senior students, Varsha Chari, Manasi Gali, Varsha Jacob, Snegha Saravanan, Pragya Shah, Shreshtha Shah, and Nethra Valli Shah, deserved a special mention as they presented the 33 minute long varnam!

Post-arangetram students, Aishwarya and Soujanya Duggirala and Vaishnavi Gomadam, presented javalis and padams. All three students, who completed their arangetram under Preeti’s tutelage, brought out the lyrical beauty of the compositions with realistic facial expressions and a command over storytelling. The program included a captivating thillana and a fusion piece on Kalabhairava. In lieu of a mangalam, Preeti decided to have her student present a thiruppavai, in which Vaishnavi Gomadam dressed as the ethereal poetess Andal described the vamana (dwarf) avataram of Vishnu. The Duggirala sisters then presented a brisk piece on Annamacharya’s “Brahmam Okatey.”

Preeti presented trophies to her students and commended them for their dedication to the study of Bharatanatyam; some who have been learning from her for over twelve years now! Preeti’s students went on to perform on March 13 at the Children’s Museum of Atlanta for an hour to promote Indian culture and arts. Preeti thanked all the parents for their continued support and encouragement as Natyam Arts Academy now expands itself to include their educational partner, Learning Ridge, to offer enrichment programs for the gifted and Lego STEM workshops.