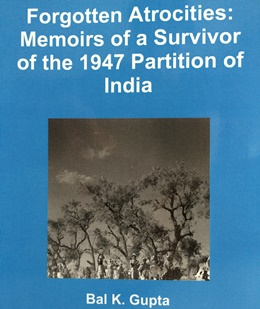 One of the many seminars was presented by Bal K. Gupta, author of Forgotten Atrocities: Memoirs of a Survivor of the 1947 Partition of India. He has been interviewed by “1947 Partition Archives” of California, the Atlanta History Center, and World Hindu News. His many articles and commentaries on the Partition of India have been published in newspapers and magazines in the USA, India, and Pakistan. He has been a keynote speaker in Texas and Georgia on the Partition for political and for humanitarian fundraising events.

Here is an excerpt from his book.

On August 15, 1947, British rulers partitioned India into two separate countries: India and Pakistan. In 1971, East Pakistan became an independent country, Bangladesh. These partitions were based on religion, with the intent of India existing as a Hindu majority country and Pakistan as a Muslim majority country. However, one Muslim majority state, Jammu and Kashmir (J&K), which bordered both India and Pakistan, had a Hindu ruler, Maharaja Hari Singh, who wanted the state to remain independent, rather than join either India or Pakistan.

In 1947, I was ten years old and lived in a Hindu majority town of Mirpur (now in Pakistan Occupied Kashmir). Mirpur was one of many small towns in J&K that lay directly on the border of India and Pakistan. Hindus, Sikhs, and Muslims had lived peacefully with one another for centuries in Mirpur. By early August, many Hindu and Sikh refugees from Pakistan had entered Mirpur because J&K was ruled by a Hindu Maharaja. This swelled the population of Mirpur from 10,000 to 25,000. All the refugees were accommodated in Hindu temples, Arya Samaj, Sanatan Dharam Sabha, Sikh Gurudwaras, and many private homes. Free cooked food or rations were supplied to these refugees by volunteers. I used to go along with my uncle to serve some of these refugees in nearby Arya Samaj temple. I also saw many young refugee boys and girls playing in a municipal playground in tattered clothes. However, harmony between local Hindus, Sikhs, and Muslims was still intact even after such massive influx of refugees.

On August 14, the Independence Day of Pakistan, I saw many Muslims of Mirpur hoist Pakistani flags on their shops and businesses and congratulate each other for the creation of Pakistan. On August 15, Hindus and Sikhs of Mirpur also hoisted India’s flag on their shops and businesses and congratulated each other on the liberation of India from 200 years rule of the British. Some wealthier individuals listened to Pundit Nehru’s speech on their battery powered radios since Mirpur did not have electricity at that time. However, the business between Hindus, Sikhs, and Muslims went on as usual and the population of Mirpur livid in peace under the Maharaja. In late August, I celebrated Lord Krishna’s birthday (Krishna Janamashtmi) in Radha Krishna temple of Mirpur till midnight.

However, this peace was shattered after a few months. On October 22, 1947, in an attempt to annex J&K to Pakistan because of its Muslim majority, Pathan mercenaries along with the Pakistani army invaded J&K with full force. On November 25, a very large number of Pakistani soldiers and mercenaries defeated the small garrison J&K army. This invasion forced the Hindu and Sikh populations to flee towards India. The migration was supposed to be an orderly event overseen by the J&K army. However, improper planning by military officers and civil administrators resulted in the abandonment of Mirpur before the evacuation was complete. This left Mirpur’s remaining Hindu and Sikh populations at the mercy of the advancing Pakistani army and heavily armed mercenaries. Around 20,000 Hindus and Sikhs were either killed or women kidnapped. I was taken prisoner along with 5000 Hindus and Sikhs, held captive in the Alibeg Concentration Camp, and finally liberated in 1948 by the Red Cross. Only 1600 women, children, and the elderly persons survived. I hope those horrible days are not repeated.

Festival of India, Atlanta Georgia. Scan and Spot Weight Loss Tips
Vital Checklist
Published on Jul 8, 2016
Festival of India Weight Loss Tips Atlanta Georgia is presented by Dr. Harpreet Singh -CEO and Founder of Vital Checklist and (iCrush)? Scan and Spot Weight Loss Workshop is an innovative weight management program developed by Dr. Harpreet Singh who practices medicine in Big Rapids. He teaches USMLE students and educates patients about their disease conditions. He is an author of Road to USMLE, Vital Checklist Cardiology and (iCrush)Ebola. He has designed many touchpoints for the patients. Let's flip the clinic and make patients lives easier and healthier. . For more Free Patient Education Videos go to http://www.vitalchecklist.com/
https://youtu.be/3PnWv1aZZTE
Weight-Loss-Education-Festival-of-India-Atlanta-Georgia-Dr-Harpreet-Singh
Vital Checklist
Published on Aug 11, 2016
Educate yourself. Dr. Harpreet Singh is the CEO / Founder of Vital Checklist.
The contents of this video and Vital Checklist website, such as text, graphics, images, and other material contained on the video and Vital Checklist Website ("Content") are for informational purposes only. The Content is not intended to be a substitute for professional medical advice, diagnosis, or treatment. Always seek the advice of your physician or other qualified health provider with any questions you may have regarding a medical condition. Never disregard professional medical advice or delay in seeking it because of something you have read or heard on the Vital Checklist website/videos.
If you think you may have a medical emergency, call your doctor or 911 immediately.Vital Checklist website and videos do not recommend or endorse any specific tests, physicians, products, procedures, opinions, or other information that may be mentioned on the Site. Reliance on any information provided by Vital Checklist website/videos, Vital Checklist employees, others appearing on the Site at the invitation of Vital Checklist, or other visitors to the Site is solely at your own risk.
The Site may contain health- or medical-related materials that are sexually explicit. If you find these materials offensive, you may not want to use our Site. The Site and the Content are provided on an "as is" basis.
This is a real patient experience. Informed consent was given from the people in this video.
https://youtu.be/uClkkAGAAho
[The article above is a Website Bonus Feature, appearing only on the website for September 2016, not in the September print/digital issues.]