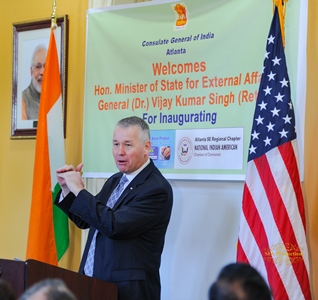 The new chapter will foster continued growth and development of Indian-American businesses for the mutual benefit of the two countries. Programs such as the E-mentoring program will provide Indian students with role models, industry-specific mentors from corporate America, through the NIACC network. The Regional Youth Entrepreneurship ‘BizFest’ platform equips Indian students with tools to become successful in both business and life. 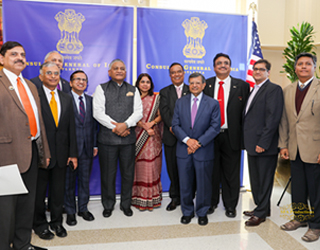 Despite it being the Sunday morning of Thanksgiving weekend and the climate turning its coldest thus far, the august presence of so many undeniably proved the relevance of the gathering. Dr. Singh, the first Indian Federal Minister to visit Atlanta since the Consulate’s opening, came for the launch of the Passport Sewa Project as well as the NIACC Atlanta SE Regional Chapter.

After digesting the criticism of the recurrent delay of getting one’s Indian Passport processed for a variety of reasons, the Government finally investigated it with a fine tooth-comb and as Hon. Singh stated, they immensely simplified the process, removing most barriers to prompt processing. Of the five sample passports processed on inauguration day, all but one was processed within 48 hours. It is the clear expectation of the Minister and his team that this performance will repeat at Indian Missions everywhere. Congressman Rob Woodall noted that America could not match this achievement.

Minister Singh took the opportunity to highlight other achievements.
–Having over 100M individuals open a bank account for the first time, using their Aadhar card so that all Government subsidies can be directly deposited to their accounts, eliminating middle men.
–Getting electricity to all villages.
–Making strides in sustainability by cleaning out and drudging many polluted rivers and lakes.
–Distributing gas to replace wood-fired stoves.
–Working on having Air India fly into Atlanta directly from Bombay. –And more.
He congratulated NIACC Chairman and Founder Mr. K. V. Kumar for launching the SE chapter, to influence policymakers and legislation, to be inclusive of all people, and to be a beacon of light for Indian-Americans. The Consulate expects to work with its SE region for its economic development. 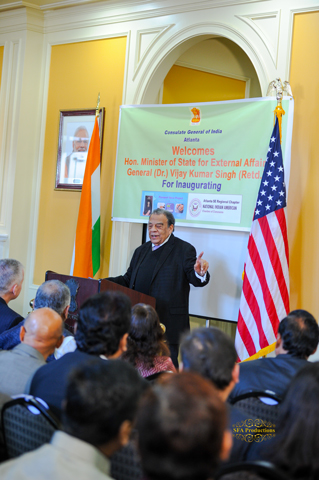 U.N. Ambassador Andrew Young spoke eloquently of how the peoples of the two nations had grown fond of each other to the point that they shared the pain of victims of terror: 9/11 and 26/11. He spoke of Gandhi’s influence on Dr. King and others. And he thanked India’s then Ambassador to the U.N. who gave him advice that helped get all of Ambassador Young’s legislation passed without a hitch.

NIACC’s K. V. Kumar spoke of his longstanding service to past U.S. presidents and of his lifetime of investments to impact economies of both countries. 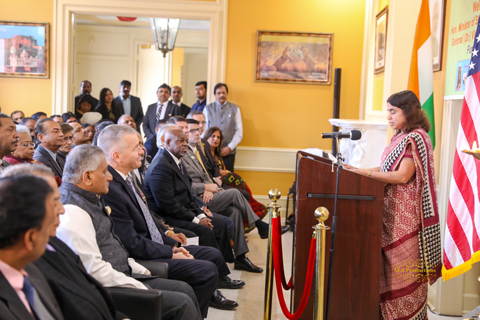 Consul General Dr. Swati Kulkarni spoke of the Consulate’s successes.
–A unified Diwali celebration with about 2,000 people of Indian origin.
–Visa camps in rural areas.
–Meetings with students in several Georgia and other southeastern universities, and how they can be great conduits for building greater ties between India and the USA.
She thanked her predecessors and current staff who are doing an extraordinary job.

A spread of delicious Indian food was arranged on the lawns of the Consulate, in a tent with portable heaters inside. The event was brilliantly presented and well attended.