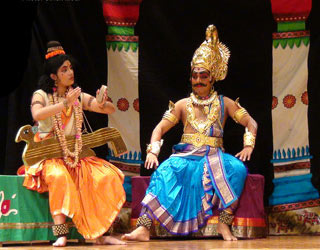 Who says you get what you pay for? There are some things in life that you get free and yet are very valuable. Atlanta Indians were treated to one such free event in the form of a magnificent dance drama Mohini Bhasmasura on Sunday July 17, 2011 at Hindu Temple of Atlanta in Riverdale.

The dance drama was presented in classical Kuchipudi style by Hari Rama Murthy’s academy, Kuchipudi Kalakshetra, based in India. A disciple of Dr. Vempati Chinna Satyam, Rama Murthy has himself mentored many successful teachers and performers. He came as guest of Atlanta’s Kuchipudi dance exponent Sasikala Penumarthi and her husband Ravi. Mohini Bhasmasura is Hari Ram’s debut choreographed dance drama.

The legend goes like this: the demon Vrikasura, who is a powerful ruler, wants to assert his power over the world and seeks Sage Narada’s advice. The sage asks him to meditate upon Lord Shiva and obtain his blessings. Shiva, pleased with Vrikasura’s devotion grants him the ability to incinerate people. However, Vrikasura, now known as Bhasmasura, turns the table and tries to test his newly acquired power on Shiva. Fearful, Shiva goes to Lord Vishnu for help. Vishnu promises that he will destroy the demon, and incarnates himself as a beautiful and charming woman named Mohini. Mesmerized by Mohini’s beauty, Bhasmasura accepts her challenge to show his prowess in dance to win her love. Bhasmasura and Mohini start dancing, with Bhasmasura matching every move and footstep with Mohini like an expert dancer. During the final stage of the dance, Mohini puts her hand over her head gesturing Bhasmasura to do the same. Bhasmasura becomes his own victim as soon as he puts his hand over his head and within seconds pulverizes himself and thus destroys himself. In the final scene, Shiva and all the deities are relieved and express their gratitude to Vishnu for bringing peace to the earth.

The whole dance drama was divided into seven scenes, each scene gripping the audience with melodious music, taal and movements of the dancers, who were clad in gorgeous and life-like costumes. All the characters, including Rama Murthy as Bhasmasura, performed exceptionally well and the choreography was commendable.

The dance drama lasted two hours, after which two priests were called on the stage who prayed and blessed the artists. Sasikala presented each artist a gift and Dr. Seshu Sarma offered vote of thanks. Sasikala mentioned that the artists, who came from India, have dedicated their entire life for the promotion of Kuchipudi dance and they do not charge any money; however, she urged the audience to donate generously to the temple.