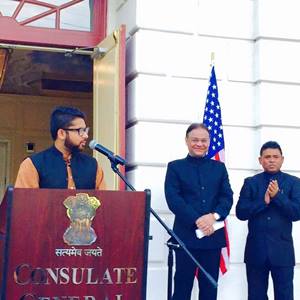 India’s 69th Independence Day was celebrated with enthusiasm and national pride at the Indian Consulate in Atlanta. Celebrations on the sunny Saturday morning, Aug 15, 2015, were attended by over 200 community members including Consulate staff and families, leaders and representatives from Indian-American organizations of Georgia, and graced by the presence of Consul General Hon. Nagesh Singh.

Monty Kataria of New York, who had come to Atlanta to host the Freedom Mela, welcomed all and invited Nagesh Singh to address the gathering. After expressing his warm greetings, Nagesh Singh noted, “As our Prime Minister said, we are a country of 125 crores. Because of the challenges we faced in terms of our size, diversity, and complex society we ought to be proud of what we have achieved so far during the 69 years and must do our bit to take our country forward.”

Nagesh Singh then read out the “Address to the Nation on the eve of India’s 69th Independence Day” by the Hon. President of India, Pranab Mukherjee. The President in his address said inter alia that “Our country’s rise will be measured by the strength of our values, but it will equally be determined by economic growth and equitable distribution of the nation’s resources. Our performance over the last decade has been commendable, and it is most heartening that after a dip, we have recovered to 7.3% growth in 2014-15. But the benefits of growth must reach the poorest of the poor…India is a complex country of 1.3 billion people, 122 languages, 1600 dialects, and seven religions. Its strength lies in its unique capacity to blend apparent contradictions into positive affirmations. In the words of Pandit Jawaharlal Nehru, it is a country held together and I quote, ‘by strong but invisible threads…About her there is the elusive quality of a legend of long ago; some enchantment seems to have held her mind. She is a myth and an idea, a dream and a vision, and yet very real and present and pervasive.’ ”

The Consul General exhorted the community to unite as one for collective visibility. He said that there has been enough talk on the matter but it is now high time to come together and forge a spirit of oneness. It is vital to have strength in numbers if we want our voice to be heard, heeded, and respected. Some in the audience were reminded of a lyric from the song “Chale chalo” (Bollywood movie Lagaan): “Tut gaee jo ungli utthi, panchon milee toh ban gaye mutthi” (Five fingers together can turn into a strong fist).

Petals drop from the Indian Tricolor as it is unfurled at the Atlanta Consulate. (Photo: Divinity AV)

He then proceeded to unfurl the Tricolor. Everyone clapped with joy and pride as the Tricolor was unfurled and the flower petals gently floated on the pristine Consulate lawn. 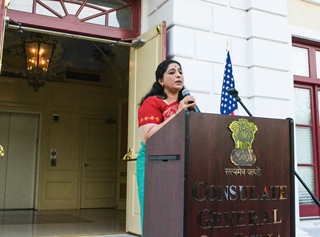 Mrs. Angha Srinivasan enthralled the gathering with her rousing rendering of the patriotic song “Ae mere watan ke logon” to the accompaniment of percussion by young Ramanuj Srinivasan. The attendees also joined in singing the lyrics of this iconic patriotic song.

Lassiter High School's STEAM program freshman Hansinee Mayani played the Indian national anthem on the violin. The gathering, once again, enthusiastically joined in singing “Jana gana mana.” Hansinee has had the privilege of being invited to play both: the Indian and the American anthems, for the 26th January Republic Day Celebrations in the past. Delicious refreshments were served and much enjoyed by all after the program.

[The article above appears only on the website for ​September 2015, not in the September print/digital issues.]