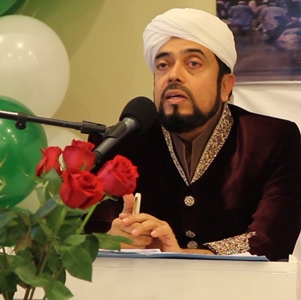 The Muslim Community of Greater Atlanta (MCGA) organized its 6th annual Mawlid Conference on January 17, 2015 at the Madina Institute in Duluth, Georgia. Every year Muslims celebrate the birthday of Prophet Muhammad (peace be upon him) with joy and religious fervor; this is an extension to the work being done for upholding the honor of the Prophet by presenting the beauty of his teachings and the positive message of true Islam.

This year’s event was attended by over six hundred Muslims of several different nationalities. A beautifully decorated stage was set for the speakers. The event began with a recitation from the holy Quran followed by nasheed (religious songs/chants) by several local brothers.

Renowned Islamic scholar Shaykh Issa al-Ninowy beautifully elaborated on the Prophet’s childhood, upbringing, and way of life which is an example of truthfulness, honesty, tolerance, and forgiveness toward his opponents. The audience raised religious slogans during his speech showing their love for the Prophet. 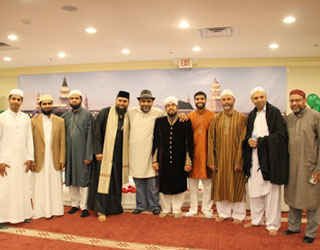 MCGA president Farooq Ahmed introducing the guests. A famous Canadian nasheed singer, Mr. Nader Khan, entertained the gathering by reciting nasheeds in Urdu, Punjabi, English, and Arabic. People were thrilled and enjoyed the variety of his nasheeds with traditional Islamic music. Muslim brothers from Somalia and Morocco also presented religious songs to the delight of attendees.

Dinner was served free and the ceremony ended with Isha prayers (night, fifth prayers) followed by a prayer thanking Allah for his infinite mercy in form of the beloved prophet Muhammad, and prayers for unity and faith for Muslims and humanity around the world, following the footsteps of the Prophet. It was reaffirmed in the prayer that Islam preaches love for all humanity.