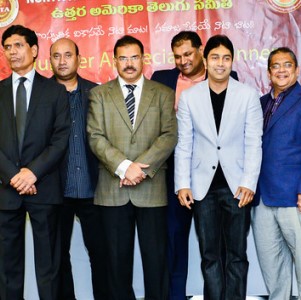 North American Telugu Association (NATA) celebrated the success of its mega convention with a lavish “Volunteer Appreciation Dinner” at Atlanta’s Taste of India banquet hall in Alpharetta on August 9, 2014. Over the last 2 years, scores of volunteers invested their time and energy to mobilize forces and contributed enormously to the success of one of the biggest conventions in the history of Telugu associations in the USA. This evening was the moment for celebrating the results that came out of that sincere work over those long months.

The merry crowd of over 400 volunteers and their families sipped in the delight of the evening with a delicious dinner and a friendly supportive team atmosphere, knowing that the convention will remain a cherished memory for the millions of magical moments that it produced.