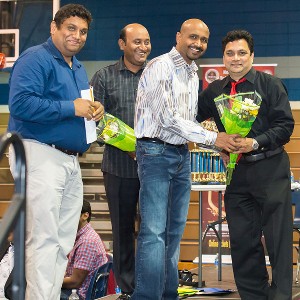 The North American Telugu Association (NATA) reached out once again to sponsor and to help conduct the Anthyakshari celebrations to celebrate the anniversary of Amruthavarshini in Atlanta. Amruthavarshini (AV) is a well-known nonprofit organization in Atlanta that supports Telugu literature and music by providing a platform for children and adults to participate and relish the warmth and beauty of Telugu culture. 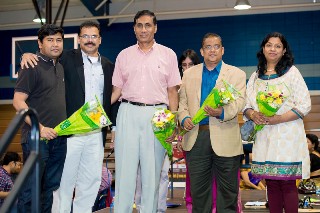 NATA leaders Dr. Prem Reddy and Dr. Malla Reddy, the grand sponsors for the Anthyakshari event, have been actively helping thousands of people across India and US through their charitable activities. 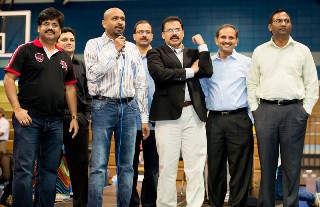 Under their aegis, NATA is gearing actively to celebrate its second convention on July 4 - 6, 2014 in Atlanta under the stewardship of president Dr. Sanjeeva Reddy. This biennial NATA convention has over 200 groups of volunteers working across the US, Canada, and India, and is expected to receive 10,000 people of Telugu origin at the GWCC Convention center.

The musical Anthyakshari event was designed by Atlanta’s creative literary doyen, Phani Dokka (photo below, 2nd from left). Phani has a penchant for combining wit and wisdom, and his skills in literature and music were evident in his quiz competition. Eleven teams participated in the fun as they were challenged to think on their feet and discover the answers to innovative questions on Telugu film songs. If “dumb charades” were required to get to the song in some rounds, finding songs with a certain word in the pallavi (thematic line of a song) was the challenge in some others. The 8-hour musical quiz competition continued with nail biting suspense and had all the thrills of a roller coaster ride. The audience was engaged completely in the fun, and several awards went to audience members for their correct answers as well! 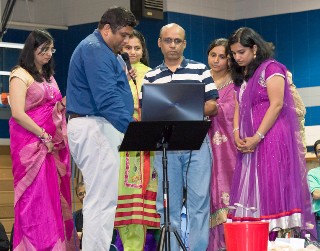 Phani and Bhanu Sri ably conducted the proceedings. Suvidha restaurant provided a sumptuous dinner and snacks at a very reasonable price. After 10 rounds of challenging competition, the following three teams were declared as winners and will proceed to the grand finals at the NATA Convention. In addition, wild card teams were formed from the remaining teams in the spirit of engagement! The teams that made it to the finals are as follows:
First Prize ($500 and Trophies): Vinod Gandikota, Sandhya Eswara, Sunita Medarametla, Sushma Sarikonda, Uma Jamched
Second Prize ($300 and Trophies): Bala Indurti, Madhavi Indurti, Neelima Gaddamanugu, Pratima Nallagatla, Shailaja Gella
Third Prize ($200 and Trophies): Gopal Turaga, Usha Mocherla, Jayashree Tangirala, Rajasri Bhushan, Jyoti Sitaram