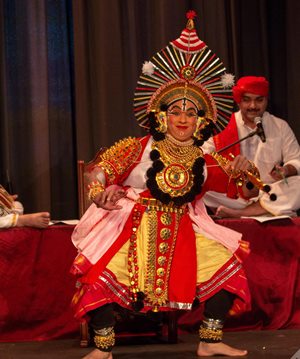 The organization and its members worked relentlessly over the last couple of months to ensure that attendees would get to experience the richness of Karnataka—the Kannada language, heritage, and culture—which was evident through a wide spectrum of cultural programs organized throughout the day: lectures on Kannada language and literature, a musical ensemble, Bharatanatyam, magic show/ demonstrations, drama, Yakshagana (folk art of coastal Karnataka region), and a musical evening where many local Kannadigas performed on stage to have the audience spellbound until midnight! Kids, too, had loads of fun with a plethora of activities: face painting, magic workshops, popcorn, balloon twisting, etc. 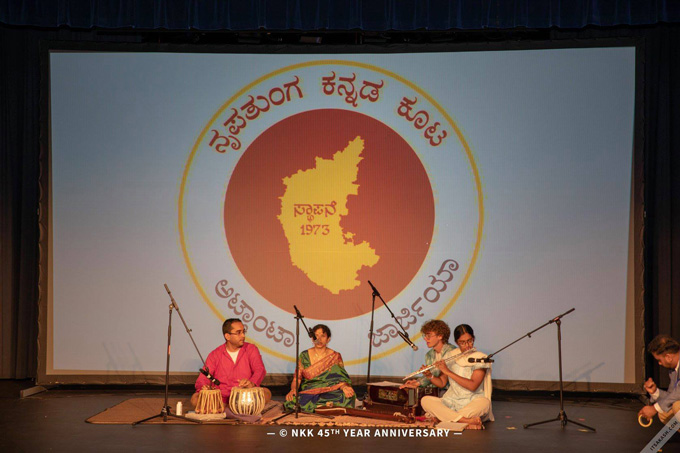 The day started with an elaborate breakfast buffet with traditional delicacies. Cultural programs then took off with a divine musical invocation and ensemble by Smt. Chaitra Gururaj and team from Auburn, Alabama.

Srinath personified energy and happiness all day, particularly encouraging local talent and organizers with his enthusiastic participation. Jayant Kaikini inspired the audience with his energetic talk, sharing his experiences living in Mumbai. He is a popular Kannada poet, short-story writer, columnist, playwright, award winning lyricist, and a script and dialogue writer for Kannada films. He encouraged the audience to study and practice literature to expand their horizons, and not merely to write what they already know.

Jayashree Deshpande is a prolific author of Kannada short stories, essays, humor, and novels. She has traveled widely in the USA and Europe and loves writing travelogues. She presented an interactive slide show on the history and timeline of prominent Kannada authors, poets, and literature.

State Rep. Mike Glanton addressed the gathering and was highly appreciative of the work and social influence NKK exerts in the Atlanta region.

The guests then released the souvenir “Chiguru” with contributions and articles from NKK members.

Renowned Kannada movie, serial artist, and talented magician M. D. Kowshik chose to perform Dr. D. V. Gundappa’s Mankuthimmana Kagga and demonstrated magic tricks for one and all. His unique presentation and grasp of Kagga had the audience spellbound! This act was enjoyed by children and adults alike.

Another highlight was the lunch, with more than 15 items on the menu, some items being shipped from Karnataka.

Post-lunch session was a treat to the senses with Atlanta Kannadigas performing the mythological drama of Lanka Dahana. Manohar Harale and team enacted the scene from the epic Ramayana where Lord Hanuman visits Lanka to find Sita and conveys the message that Rama will soon be there to free her from Ravana. Impressive acting, professional costumes, and detailed props had the audience captivated.

Evening snacks with tea and coffee were relished—but once back in the auditorium, the audience seemed hungrier for the next cultural performance—the Yakshagana by Yakshamitra team from Toronto, Canada. This traditional theatre form combining dance, music, and dialogue has been preserved for over a thousand years in the coastal Karnataka region. The team enacted “Sri Krishna Sandhaana,” a scene from the epic Mahabharata, which was Krishna’s last-ditch attempt to prevent war between the Kauravas and Pandavas. Colorful costumes, makeup, and vibrant music using simple cymbals, drum, and singing created an intense ambiance, and the standing ovation at the end was proof of the quality of the performance. 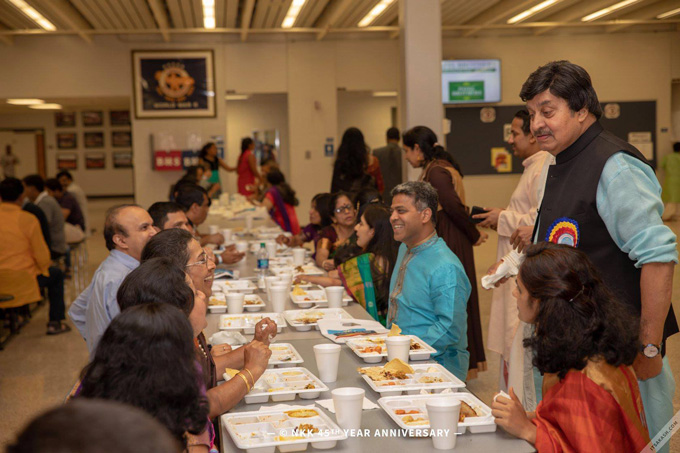 Dinner was also an elaborate experience with a number of delicacies shipped from Karnataka—but the crowning performance of the day was yet to come: a musical evening headed by Praveen D. Rao, a well-known composer, music director, and musician. He specially composed a tune within a matter of a few hours in dedication to the flood victims in the Coorg area of Karnataka—“Bharatambe nee shantalagu.” NKK is privileged to have a dedicated song composed during its flagship event!

Ajay Warriar, a famous playback singer who has recorded over 20,000 songs across 16+ languages, rendered original compositions and many hit movie songs.

Varijashree Venugopal was versatility personified with spellbinding flute and vocal performances. N. S. Manjunath had the audience and the performers tapping the dance floor with his drumming and creative rhythms. Pranav Swaroop, a Kannadiga student at Georgia Tech handled intricate tunes and moods with the violin.

At midnight, the grand spectacle concluded with the audience craving more. The fact that all audience, participants, and invited guests stuck till midnight spoke highly of the variety and quality of the performances!

An example of Yakshagana performance:
https://youtu.be/5gQRcJwPfpI