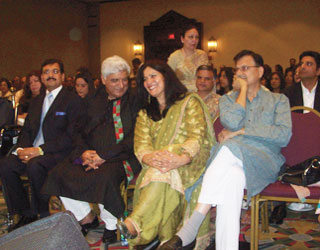 It was an evening with a difference as art lovers of Atlanta were treated to a shayari session by renowned Bollywood lyricist and script-writer, Padma Bhushan Javed Akhtar, at the Hilton Atlanta Northeast in Norcross on June 29, 2012. Organized by the Aligarh Alumni Association of Atlanta and Mehfil-Desi American Show/ Hum TV in collaboration with Gandhi Foundation USA (GFUSA) and Indian American Cultural Association (IACA) under the leadership of Mohammad Inamullah, Asif Taufique, and Sultan Khan, the three and half hour long poetry session had poet Javed Akhtar holding the audience spellbound with his nazms and shayars.

A huge round of applause greeted Javed as he climbed to the podium and recited his first nazm, sung by late ghazal singer Jagjit Singh, “Mujhko yakin hai sach kahti thi.” “This nazm deals with all of you, and I am so happy that people are highly successful here in their professions,” he stated. His nazm “Doraaha” from his latest book Lava, dedicated to his daughter Zoya, “Yeh jeevan aik raah nahin hai,” won massive applause. This was followed by “Mela,” dedicated to son Farhan Akhtar.

Next was a romantic offering, “Meri baat jo main kah nahi saka tujh se.” This was followed by a rendition whose two verses were an extension of the famous hit number of the 1980s movie, Silsila, “Wo kahan aa gaye” and had not appeared in the song. Another compared the lives of a commoner and a wanderer. The flow of time is depicted in the lines “Kise pata hai ki waqt kya hai.”

In a question and answer session Javed spoke of his early struggles. Then when he started getting famous, it was not as himself but as Shabana Azmi’s husband and now as Zoya and Farhaan Akhtar’s father. With a dimpled grin on his face, Akhtar said he was happy with his children’s achievements on one hand, and on the other, his wife Shabana was a constant source of inspiration for him.

Javed expressed happiness over the Copyright Amendment Bill recently passed by the Rajya Sabha and said that now writers and musicians have got their rights whereas earlier they did not make much from commercial success. He said that music companies dictate terms even with renowned musicians like Ravi Shankar and A.R. Rahman, and the writers cannot fight big companies.

When asked as to why the term “Bollywood” was adapted from “Hollywood,” Javed categorically stated that this name was given by the media, not the film industry. “I don’t like it, and we have our own individuality,” he said.

Bollywood is not only successful in India but its movies are released in 136 countries, from Brazil to Columbia. “We have inherited this kala through Ram leela, folk leela, and Krishna leela. In earlier times Parsi theater was a prominent feature in cities and comprised the structure of family drama and films similar to that of Bollywood films,” he stated.

Javed lamented that because of the fascination of the Indian masses with the English language, Urdu, Hindi and other vernacular languages had gone to the slums and the lower strata of society who cannot afford to send their children to convent schools. “I think in India we have to think of preservation of all the vernacular languages. It is sad, for when you kill a language, you actually kill a culture,” he stated.

Javed surprised everyone by explaining that he had a nickname, Jadoo, for the first two years of his life, taken from a line of a poem written by his father: “Lamba, lamba kisi jadoo ka fasana hoga.” His parents had given his name Javed later since it bore close similarity to Jadoo.

The soft-spoken writer noted, “Poetry is an inborn talent and you cannot take a crash course in imagination. There is a new world at every step and one learns a lot through observation and inspiration in this zindagi.” 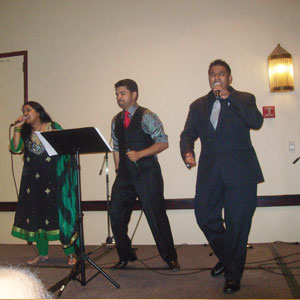 Asked why the current generation prefers songs like “Munni badnam hui” to “Mere mehboob tujhe meri mohabbat ki kasam” of yesteryear, Javed stated that such songs are short-lived and will not last more than one and half years.

When asked if he was satisfied with his work, straight came the reply, “Anyone should strive to do to the best of his ability. I would like to improve upon whatever good work I have done.” 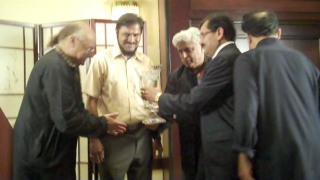 One highlight of the evening was the presentation of an award by Javed Akhtar and Ajit Kumar to Chairman of GFUSA, Subash Razdan, for building bridges in the community and linking Gandhi-King messages of peace and non-violence. Mr. Razdan later said, “This prestigious award indeed is very humbling and gratifying as it signifies the confidence of not just the Indian Americans but even the Pakistani Americans in the US. I will cherish their love and affection for me through this beautiful crystal memento.”

At the end of a memorable evening, shayar Javed Akhtar bid adieu with the words, “Main phir aane wala hun.”