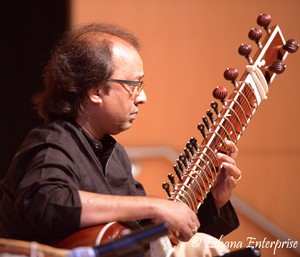 (Left) Pandit Nayan Ghosh, the only maestro with superlative command on both sitar and tabla. (Photo: Bytegraph)

“Music expresses that which cannot be put into words and that which cannot remain silent,” as the guest of honor, Consul Rangachari Srinivasan (Consular/Community Affairs/Commercial/Political – Consulate General of India in Atlanta), quoted Victor Hugo in his opening remarks. On May 14, 2016 at the Georgia State University Student Center, “Splendor of the Indian Ragas,” a concert of sitar and tabla by renowned Pandit Nayan Ghosh and his son, Ishaan Ghosh, did express much emotion and proved that saying to be true! 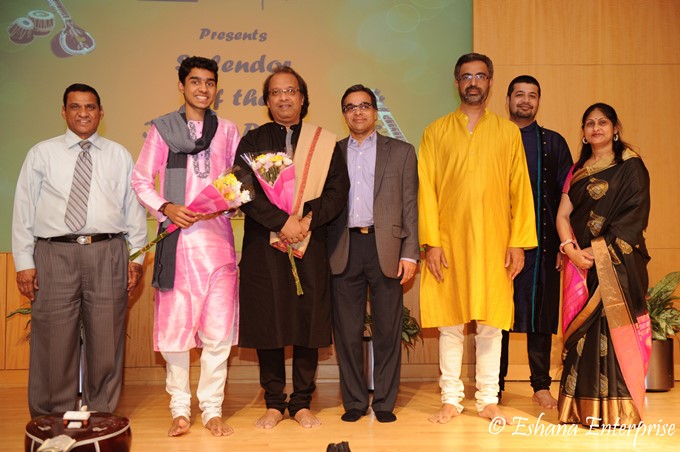 It was refreshing to see that young 15-year-old artist, Ishaan, who has come to Atlanta before as a child prodigy, now flowering into a tabla virtuoso in the footsteps of his father, the Pandit ji, and his grandfather, the late Padma Bhushan Pandit Nikhil Ghosh. His sawal-jababs and little solos interspersed within the sitar performance were crisp and sparkling, like youth, interplaying with the age-old melodies that Raga Vachaspati, and later Raga Desh portrayed. Pandit ji started his concert with the Raga Vachaspati, one of a few ragas borrowed from the Carnatic tradition, and played a slow alap, jor, and jhala, followed by a vilambit or slow-tempo composition in teental, of sixteen beats, and then a drut or faster composition in teental. After a brief intermission, he played Raga Desh, a very popular and melodious raga (Tagore had set the tune of “Bande Mataram” to this raga) in the ten-beat cycle of jhaptal, on audience request. Also on audience request, Pandit ji ended the program with a vocal rendition of a baul song, a folk melody from Bengal. One just wishes, instead, that we had the opportunity to listen to Pandit ji’s tabla, the instrument for which he is most renowned. 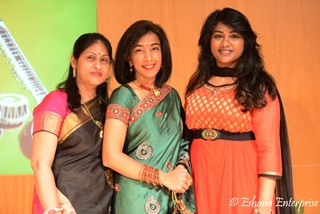 The event was organized by Eshana Enterprise. The guest of honor, Consul Srinivasan, and special guest, Subash Razdan, spoke briefly to welcome the artists and also thanked them and the audience at the end of the concert. Emcees Anjali Nagrani and Tanvi Reddy gave a wonderfully informative introduction of the artists along with a slide show on sitar pioneers and masters.

There was a brief discussion at the end of the concert, where we came to know about the Oxford Encyclopaedia of the Music of India. Started in 1961 by the late Padma Bhushan, Pandit Nikhil Ghosh, father of Pandit Nayan Ghosh, it is first of its kind spanning many long years of research and compilation, and a vast collaborative effort by Sangeet Mahabharati Music Academy, which was established in 1956. First published in 2011 worldwide as a three volume series, under the Oxford University Press, it depicts 2,000 years of history of Indian music. With over 5,000 entries, the work spans not only all regions of India, but also covers the music of the subcontinent, including Nepal, Bangladesh, Pakistan, and Sri Lanka. 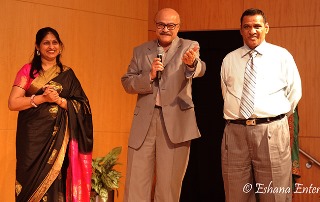 An event of this kind is a rare occurrence in Atlanta, and we are grateful to Mustafa Ajmeri for helping in coordinating this event, Prabir Mehta – a family friend of Pandit ji, and Arati Reddy – President of Eshana Enterprise, for bringing these artists to Atlanta.

Splendor of the Indian Ragas
Coverage of the event on TV Asia, with interview
https://www.facebook.com/EshanaEnterprise/videos/1127129653974968/

Video Clip from our recent event- Splendors of the Indian Ragas
https://www.facebook.com/EshanaEnterprise/videos/1135882483099685/

Another Video Clip from our recent event- Splendors of the Indian Ragas
https://www.facebook.com/EshanaEnterprise/videos/1135888169765783/