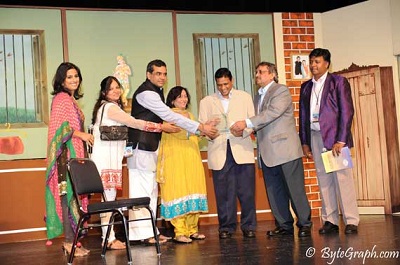 FOMA, or Friends of Mustafa Ajmeri, is a group created to honor Mustafa Ajmeri who has earned fame and friends through his prolific role as Atlanta’s leading show promoter. Ajmeri who is originally from Ahmedabad, has not only spent a lifetime promoting Indian culture and entertainment in Atlanta, but has also forged lifelong ties with hundreds in the community because of his selfless availability to the cause of performing arts and entertainment. Ajmeri is now braving a serious illness prompting the formation of FOMA.

The cause of honoring and helping Ajmeri, along with the star power of Paresh Rawal resulted in a full house and even encore performance the following Labor Day weekend. Atlanta’s theatre-loving community enjoyed a breezy comedy, “Krishan vs. Kanhaiya,” The thought-provoking play is about an atheist’s battle with God. Krishan (Paresh Rawal) is an atheist who runs a shop along with employee Vasant (Nilesh Pandya). Krishan mocks his devout wife Sushila (Manisha Vora). After an earthquake destroys his shop, an insurance agent (Ankit Trivedi) visits Krishan’s home to inform him that the claim will be rejected because the loss occurred due to an “act of God.” Krishan files a case against God.

Lawyer Sharmaji (Chirag Vora) tells Krishan that he will not win because God is nonexistent and cannot be sued. During the trial, Krishan, Sharmaji, Liladhar Swami (Saumil Daru) and Shidhdheshwar Swami (Pradeep Vengulrekar) have lively discussions about the existence or nonexistence of God, and of religion being commercialized. Kanhaiya (Dharmendra Gohil) claims to be “Krishna Vasudev Yadav.” Krishan gets the support of the media (Pooja Gupta) and in the concluding part has touching scenes as well as comedy.

Paresh Rawal, besides having enthralled live audiences for over 25 years, is also a successful Bollywood actor who is respected for his versatility. The story was written by Bhavesh Mandalia and directed by Umesh Shukla. The play is an adaptation of the popular Gujarati comedy “Kanjee Virrudh Kanjee.”

After the interval, as the apt song ‘jeena isi ka naam hai’ heightened the mood, Viren Mayani introduced Ajmeri: “He is always full of hope, smiles and a genuine interest to assist anyone, anywhere, known or not. ?He never has ill will towards anyone. For more than thirty years he has brought professional entertainment shows to Chicago and then Atlanta: music, dances, literature, theatre and more.”

In walked Ajmeri at a slow pace but with a broad smile as the audience gave him a standing ovation. Ajmeri’s family members came on stage, and he was presented with a floral bouquet by his granddaughter Nyla. A plaque from FOMA described him as the essential element of show promotion in Atlanta.

Dr. Prakash Desai and Mrs. Tarla Daftari, members of FOMA who worked on this event, shared their emotions about Ajmeri’s friendship and his fellowship with the community.

Thanks to the Gandhi Foundation of USA, that cosponsored this event, FOMA was able to stage this play at nonprofit budget levels. GFUSA Co-founder and Chairman, Subash Razdan felicitated Ajmeri with this sher written for him: