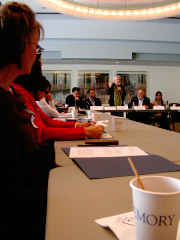 Communities of color are largely missing from public debates over education reform issues. Results of a poll about parental perspectives on school quality, commissioned by New American Media, with support from the Gates Foundation, were presented to the public and the press on March 6, 2012 at Emory University. An “Ethnic Media Roundtable Discussion on Educational Reform” followed, with experts and attendees considering what's working in school reform, what worries people most, and what news media, especially ethnic media, can do through more and better coverage.

The poll was done to see what minorities thought of the state of school systems and whether they were satisfied. The results indicated that people do not understand the weaknesses of the education students are getting, especially in the Southeast, and that the media can help.

The poll clarified that different groups (Asians, African Americans, Hispanics, whites) had different priorities when ranking their important issues (education, health care, taxes, immigration, discrimination, housing, and others). Relationship between these issues was noted, for example how immigration problems and worries have been seen to affect children's education in the Atlanta area. 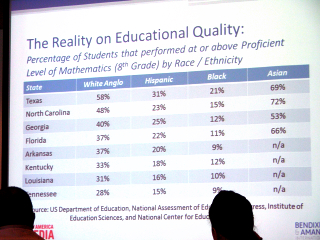 Although minority parents in the Southeastern USA have high educational aspirations, are heavily involved in their children's educational experience, and are aware of the importance of teacher quality, they have a very positive view of the quality of the educational system. That is, they do not appear to understand the weaknesses of the education their children are receiving: that U.S. education falls short of other countries, and that education in the Southeastern U.S. is far short of the average in the U.S., ranking towards the bottom. 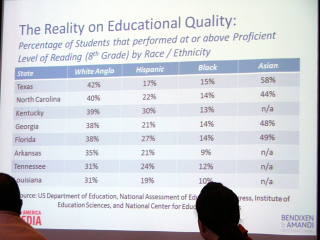 Parents will only become energized to support efforts to reform schools if they are better informed. The media, especially ethnic media, has an important role to play in achieving this objective. For a list resulting from this discussion on ways that the media could help, please see the Website Bonus Features [below].

Over 57 million ethnic adults connect to each other, to home countries and to America through 3000+ ethnic media, the fastest growing sector of American journalism. New America Media is the country's first and largest national collaboration and advocate for more than 7,000 ethnic and community news organizations.

*NEW (added to this page on 4/22/12):
From New American Media, the organizers of the event above, comes an article reporting on the entire series of Roundtable Discussions on Education Reform, from the first in Atlanta to others in New Orleans, Memphis, and Miami.
"Parents: The Missing Engine Behind School Reform"
New America Media, News Report, Khalil Abdullah, Posted: Mar 26, 2012
http://www.atlantabeez.org/parents-the-missing-engine-behind-school-reform/
Pointers from the discussion on ways that the media could help
(civic journalism, advocacy journalism):
a) give voice to the issue
b) ask for evidence when the issue comes up in the news and delve for useful info
c) cover good news, too, because all bad news makes people give up, disinvest, do nothing
d) inform about lack of equity
and about lack of vision/goals in some places vs. helpful vision/goals in others
e) be aware of stereotyping
f) cover news on SB 458 banning undocumented from universities + students giving up--
and parents in jail/parents afraid to drive for fear of being picked up, etc.
g) tell parents that critical thinking skills and application-based learning are more important than rote learning
h) and that small schools and schools where different age groups interact are helpful
i) and that charter schools and independent schools have the benefit of flexibility and creativity in teaching
j) and that language classes are useful
k) provide policy summaries for parents where needed (if they don't have them or understand them)
l) use social media to spark involvement
m) look for and interview/report on people who are doing great things in education: teachers, students, parents, etc.
n) ask readers to contribute, e.g. Who is the teacher who changed your life? Have multilingual essays, sponsors
o) report on Fulton County's bilingual liaisons/ workshops for parents
p) and Deming study group at GA Tech (Ed Johnson is contact)
http://www.edjohnsoninseat9.com/more/index.cfm?Fuseaction=more_3413