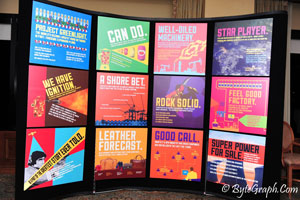 A display at the ‘Make In India’ Exhibition organized by the Consulate General of India, Atlanta at the World Trade Center Atlanta, City Club of Buckhead, on January 19, 2015. (Photo: ByteGraph.com)

Consul General Kumar began his remarks by paying homage to Dr. King, saying “Today is the birthday of Dr. Martin Luther King, Jr., the iconic American leader who was born in Atlanta but belongs to the world. Dr. King was also inspired by Mahatma Gandhi and had written about ‘My Trip to the Land of Gandhi’ in 1959 and I quote, ‘…It was wonderful to be in Gandhi’s land….I left India more convinced than ever before that nonviolent resistance is the most potent weapon available to the oppressed people in their struggle for freedom.’ My first official engagement in October 2011 was to pay homage to Dr. King and the Gandhi Statue donated by the Government of India, in the hallowed grounds of the Dr. King National Historic Site in Atlanta.”

Introducing the call “Make in India,” Kumar shared that “the India story which began with the 1990’s economic liberalization, now needs to be revitalized with a new chapter – Make in India, with its logo being a striding lion made of cogs, symbolizing manufacturing, strength, and national pride. Envisaged by PM Modi on 25th September, 2014, the Make in India program is Government of India’s blueprint to transform the country into a global hub of manufacturing, design, and innovation.

He went on to describe India’s 25 sectors, its numerous initiatives to spur growth and investment, and various examples of US-India business collaboration. “The trade between our nations has increased five-fold since 2001 to $100 billion,” he said. “In the September [2014] meeting, PM Modi and President Obama had committed to increasing trade to another five fold, to $500 billion, which will create thousands of jobs in India and US.” More recently, “US had a 100 strong delegation led by Secretary of State John Kerry as a partner country in Vibrant Gujarat Summit [January 2015]. President of US-India Business Council had stated that $41 billion investments are in pipeline.” [For details of the speech, see Website Bonus Feature.] 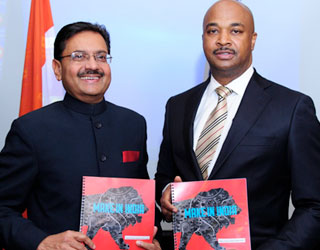 Ajit Kumar invited Atlanta City Council member Mr.Kwanza Hall to address the gathering. Mr. Hall conveyed the Mayor’s greetings and said, “It is a very solemn day for us as we celebrate the legacy of Dr. King and, of course, the legacy of Gandhi. I am excited about the trip that has been arranged by the U.S. State Department: … six people … from around the country … will be visiting Delhi, Bangalore, Hyderabad, and Dehradun. You know … I have always wanted to go to India! We want to focus on entrepreneurship and innovation, so it is appropriate to talk about it today, and the success story that your Prime Minister has presented to us, and what he has done in his life and so many of you have done in your lives as entrepreneurs will assure you of a bright future in the nation and your country or diaspora, and we want to be a part of it.” 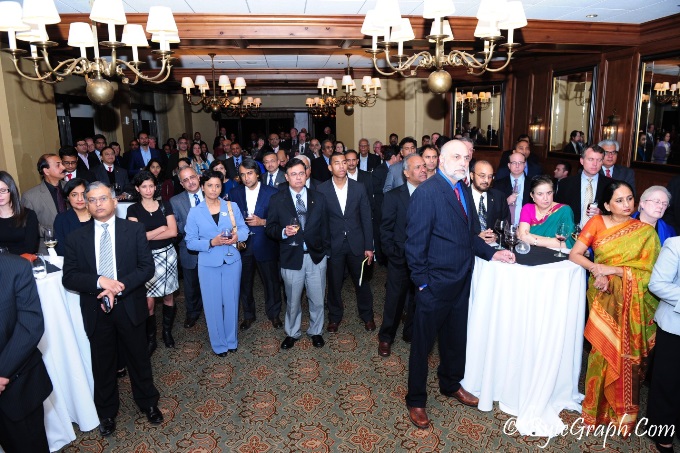 Ani Agnihotri, Founder of USA India Business Summit, current Chairman of IACA, and President of Asian American Heritage Foundation, thanked CG Ajit Kumar for taking this initiative of a Make in India Summit. A small seminar had also been presented on December 8 about manufacturing in India. “Fifteen years from now, Indian economy is likely to be $30 trillion,” he said. “Yes, trillion with a capital T. So please believe in India.”

After screening of a riveting video to pitch the innovative measures and entrepreneurial projects to woo potential investors, copies of a glossy and informative brochure, Make in India, were handed out by the Consulate. Bhojanic-catered delectable snacks were served. 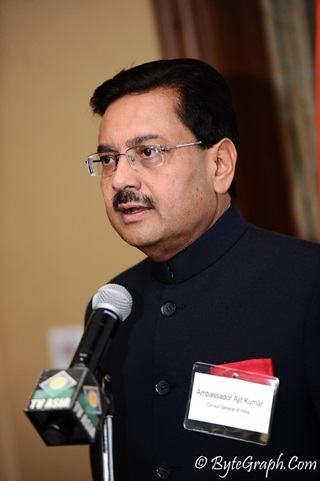 Consul General Ajit Kumar’s speech, excerpts:
“We have identified 25 sectors where India has the core competency to emerge as a global champion. India is uniquely positioned for such a project: its large, primarily young, and mostly educated population makes for an ideal workforce that is skilled and available for hire at a competitive price. On the other hand, they double up as a vast consumer market.

“The initiatives are designed to facilitate investment, foster innovation, protect intellectual property and build best-in-class manufacturing infrastructure by introducing new delicensing and deregulation measures to reduce complexity and significantly increase speed and transparency. Moreover, India’s manufacturing infrastructure and capacity for innovation is poised for phenomenal growth: new smart cities and industrial clusters, being developed in identified industrial corridors having connectivity, new youth-focused programs and institutions dedicated to developing specialized skills. Most importantly, the program represents an attitudinal shift in how India relates to investors: not as permit-issuing authority but as true business partner.

“With the unprecedented and historic general elections in India, rekindling international interest and restoring global confidence in India led by new PM Modi is seen as one of the major positive developments in the world. The indefatigable optimism about India’s rapid progress is further echoed in World Bank’s projections that India would grow by 6.4% this year and would become the fastest growing economy in Modi Government’s 4th year in 2017, when its growth rate would be better than China. PricewaterhouseCoopers have even stated that India has the potential to achieve a 9% growth rate and become a $10 trillion economy by 2034 on the back of concerted efforts by the corporate sector and a constructive role played by the Government. Therefore, Modi’s Government has liberalized foreign direct investments in key areas like railways, defense, and insurance and has introduced labor reforms. It is now keenly focused on ease of doing business. 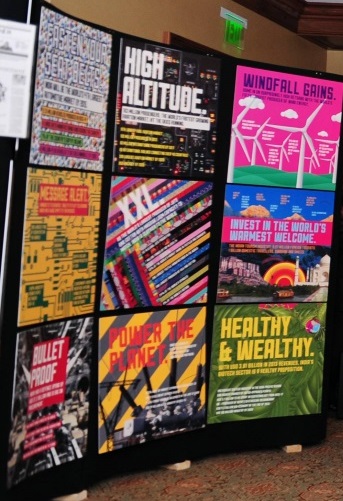 “Live projects like Delhi-Mumbai Industrial Corridor (DMIC), featured in KPMG’s 100 most Innovative Global Projects as one of the world’s most innovative and inspiring infrastructure projects, seeks to create a strong economic base with a globally competitive environment and state-of-the-art infrastructure to activate local commerce, enhance investments and attain sustainable development. DMIC is being developed as a global manufacturing and investment destination utilizing the 1,483 km-long, high capacity western Dedicated Railway Freight Corridor (DFC) as the backbone.

“The objective is to increase the share of manufacturing in the GDP of the country and to create smart sustainable cities where manufacturing will be the key economic driver The Indian Government has taken several legislative and policy level initiatives to create a conducive environment for the protection of intellectual property (IP) rights of innovators and creators by bring about changes.

“To give global recognition to Indian economy, PM Modi launched the Make in India initiative, urging Investors to look towards India as not merely a market but as an opportunity. India is the only country in the world which offers the unique combination of democracy, demography, and demand. The Government is taking initiatives for skill development to ensure that skilled manpower is available for manufacturing. The Digital India mission would ensure that Government processes remain in tune with corporate processes. For example, India expects to double its exports to $24 billion to emerge as world’s largest exporter by 2020. Ford plans to invest $1 billion in a new car plant in Gujarat also for export purposes. At the recent Vibrant Gujarat Business Summit, Sun Edison of US has agreed to invest $4 billion in a joint venture with Adani Enterprises, India’s biggest power producer and port owner, to make India’s biggest solar photovoltaic manufacturing facility. Similarly, Adani Group has signed an accord with Australia’s Woodside Energy in the oil and gas business. To continue this momentum Modi has launched a website www.makeinindia.com informing prospective investors about various sectors to explore, like automobiles, space, aviation, biotechnology, chemicals, construction, electrical machinery, food processing, defense manufacturing, IT and BPM, leather, railways, wellness…” 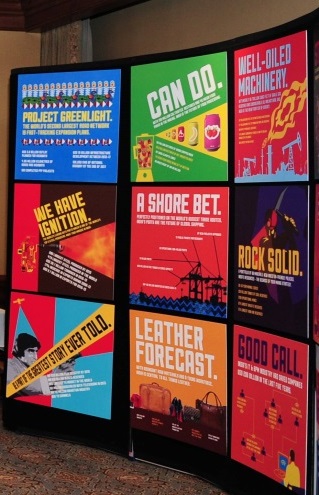 Kumar concluded his remarks citing India-US Relations. “After the very successful visit of Prime Minister Modi in September last year to USA, this is a defining time in US-India relations. President Obama will visit India becoming the first US Head of State to attend India’s Republic Day on 26th January and the only US President to visit India twice. His historic visit will take our strategic partnership to the next level.

“The India-US strategic partnership is rooted in our shared democratic values, which is now broad-based and multisectoral. Bilateral partnership enjoys bipartisan support in both countries. In fact, it covers every endeavor of human pursuit. The trade between our nations has increased five-fold since 2001 to $100 billion. In the September meeting, PM Modi and President Obama had committed to increasing trade to another five fold, to $500 billion, which will create thousands of jobs in India and US. For example, in the defense field, the US has become the largest supplier of defense equipment in the last 3 years and active discussions continue in identifying avenues for coproduction and development. Already some items for the heavy lift C130J aircraft are being produced by Tata’s in Hyderabad in their joint venture with Lockheed Martin of Marietta, GA.

“Since Prime Minister’s visit to US in September, several key meetings have been held which would expand the cooperation between India and United States also in the field of manufacturing, for example, India-US Trade Policy Forum met in Delhi last month to deepen bilateral engagement across the sectors. USA is already one of the biggest investors in India today with over $30 billion investments in various sectors.

“The U.S. government had welcomed India's offer for U.S. industry to be the lead partner in developing smart cities in Ajmer (Rajasthan), Vishakhapatnam (Andhra Pradesh) and Allahabad (Uttar Pradesh).The Prime Minister would welcome two trade missions in 2015 focused on meeting India’s infrastructure needs with U.S. technology and services. US had a 100 strong delegation led by Secretary of State John Kerry as a partner country in Vibrant Gujarat Summit. President of US-India Business Council had stated that $41 billion investments are in pipeline.

“CISCO, the world’s largest computer networking company, plans to invest $1.7 billion in the “Digital India” drive by Modi. Microsoft CEO, Satya Nadella, met PM Modi and has promised to be a part of both initiatives, “Make in India” and “Digital India,” by contributing to electronic manufacturing and increasing internet connectivity.

“For the ease of business and tourist travelers, India has launched the Tourist Visa on Arrival (TVoA) enabled with Electronic Travel Authorization (ETA) Scheme starting November 27, 2014. The information and instructions for the TVoA enabled with ETA is available on the link: https://indianvisaonline.gov.in/visa/tvoa.html and on the Consulate website www.indianconsulateatlanta.org

“To conclude, with the Modi Government bringing in the second generation of Indian reforms, investors worldwide have a golden opportunity to come, Make in India, and invest in the global powerhouse of tomorrow.”