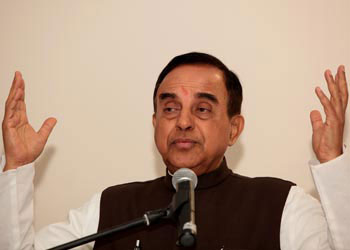 Political activism has increased dramatically In recent months, with many making nationalist demands and challenging the corruption issues in India. In the forefront have been Baba Ramdev, Anna Hazare, Professor Subramanian Swamy (a visiting professor at Harvard University and President of Janta Party in India), and many others.

Atlanta was fortunate to witness Professor Swamy reiterate the menace of widespread corruption in India at the Roundtable Luncheon attended by over 200 members of the diaspora and hosted by the India Awareness Foundation (IAF), a national advocacy organization and think tank based in Atlanta, on Saturday, August 6, 2011 at Ashiana Banquet Hall, Global Mall, Norcross, GA.

Dhiru Shah, President of IAF, welcomed Dr. Swamy, and Subash Razdan introduced him with anecdotes from his association as a student of Dr. Swamy at IIT, Delhi in 1969. Subash humorously described Dr. Swamy’s tendency to take on powerful women politicians such as Indira Gandhi, Sonia Gandhi, and Jayalalita of Tamil Nadu.

Considering the Indian diaspora, Dr. Swamy pointed out that during the independence movement of India, overseas Indians played a helpful role. He compared the Chinese living abroad, who, he said, never face the types of human rights abuses that Indians have to face in their day to day life. He cited the suffering of Hindus as minorities in many foreign countries like Pakistan, Bangladesh, Fiji, Malaysia, and elsewhere.

Dr. Swamy defined corruption, according to the Prevention of Corruption Act in India, as making personal gains using one’s political and government office. He described recent scandals in which billions of dollars in bribes were taken by some central and state ministers while allocating the 2G spectrum. Dr. Swamy said that he has filed several legal cases in the Supreme Court of India against corrupt ministers, businessmen and officials; some have gone to prison and many more will follow.

Black money, Dr. Swamy said, is siphoned off to foreign countries by way of hawala transactions sometimes involving terrorists and criminal elements. Money in foreign banks can then be brought back to India via ‘Participatory Notes’ (PN) issued by international financial organizations. The holder of the PN can buy stocks in the Indian stock market legally and when the market goes up he sells these shares and converts the proceeds into foreign currency of his choice approved by Reserve Bank of India. He added that it is mind boggling that a tiny tax-haven island, Mauritius, has become the biggest investor in India, three times more than USA. Thus, black money manipulates the Indian stock market. If this money (estimated to be between ½-1.3 trillion dollars) is brought back to India, the country could solve many of its economic problems.

Black money is used to buy grain which is then hoarded in warehouses, creating food shortages. Such speculative practices have resulted in 16% inflation in India while India’s GDP growth rate is only 8-9%. Black money also buys luxury goods: 70% of investment is made in production of luxury goods while 300 million people live in poverty. The purchase of real estate, he says, has driven up its prices. Dr. Swamy emphasized that we must remove this corruption; otherwise the country will be ruined.

The German government, he reported, has recently shown willingness to give the names of Indians holding black money in Swiss banks, but in spite of intervention by India’s Supreme Court, the UPA government has been dragging its feet.

Looking at the cause of such corruption in India, Dr. Swamy said that historically Indians were basically honest because of the high standard of ethical and moral values based on Sanatan Dharma. While making money was considered legitimate, it was understood that it should be done to help society. However, due to westernization and globalization, he said, Indians have forgotten Dharmic values, and making money by hook or by crook has become their main goal. He asked NRIs to follow the Dharmic duties and report corruption and money laundering.

In the Q & A session, he answered that India’s military is powerful enough to fight back the Chinese and defend the nation; it must also fight terrorism. In his opinion, India is likely to overtake China economically in the near future.

IAF then recognized three leaders of the Atlanta community: Aswin Patel of Shakti Mandir for leadership and philanthropy; Ravi Ponangi of India Tribune for sharing information with Indian-American and mainstream audiences; and Ram Sidhaye for his campaign against distortion of Hindu history, culture, and traditions in Western academia.

Echoing the sentiments of Dr. Swamy for the need of a Federation, a new umbrella organization was launched, the Federation of Hindu Associations of America (FHAA), with Sneha Mehta as interim Chairperson and Indu Dey as interim President.