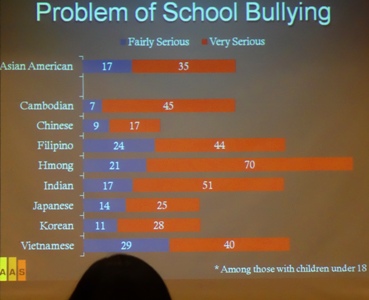 A picture is worth a thousand words, and the graphs and statistics presented at a program organized by the Washington, D.C.-based Asian Pacific American Institute for Congressional Studies (APAICS) on February 8 and 9, 2014 in Atlanta gave insights into the place of Asian Americans as a whole and of various subgroups, including Indian Americans, in the US society and economy. National and local leaders from the arenas of politics, nonprofits, and business came together for training and discussion on public policy that impacts their communities. This was one of several such gatherings in various regions around the country.

Work began with a practical Leadership Academy and Political Bootcamp. It first focused on values coming from family history, and how they affect the person you are and your leadership development. Sessions followed on Leadership Inventory, Civics and Politics, Public Speaking, and the Press Conference.

The second day was Day of Dialogue/Policy Summit. Floyd Mori, President and CEO of APAICS, described this series of local outreach to build the pipeline of ‎AAPI‬ Leaders. Christine Chen, profiled by Newsweek magazine in 2001 as one of 15 women who will shape America’s new century, and now Executive Director of APIA Vote, also in the DC area, presented 2014 election data for the South. She noted that APAs see themselves less in one political group or another, but are more interested in relationship with candidates and issues, including Education, Debt, the Environment, School Bullying, Health Care, and Immigration. Her organization can provide state-by-state fact sheets and data. 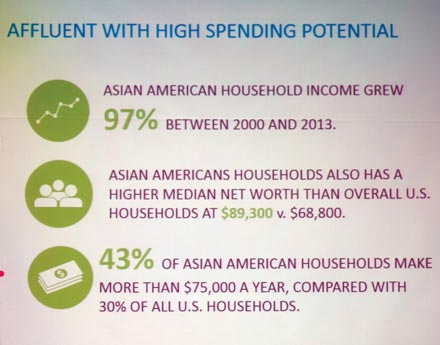 The Nielsen ratings for TV are well known, but more broadly the company studies consumers worldwide to give businesses (and nonprofits) the more complete view of trends and habits that they need to guide decisions for marketing and growth. Betty Lo, Vice President of Public Affairs at the New York headquarters, returned to Atlanta where she received her MBA from Emory and worked in managerial positions at Coca Cola, who hosted this meeting. She discussed their 2012 "State of the Asian American Consumer" survey and particularly the new 2013 "Significant [in population growth] Sophisticated [in purchasing] & Savvy [in technology & social media]" survey. Results point to habits such as more frequent shopping trips and more focus on brands for quality. Information is used in marketing products to Asian Americans, and also to the general population but with Asian American consumers represented. She likened the importance of participating in such surveys to participating at the ballot box, since "we hold the key to making the community recognize us as a viable force." 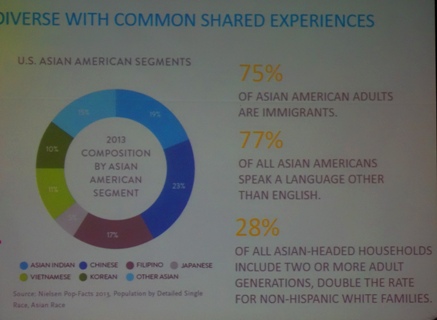 Diversity: Indian-American or Asian Indian is the second largest group.

Tony Patel serves on the State Committee of the Democratic Party of GA and DPG's Strategic Planning Committee; when he ran for GA state representative, he said, not a lot of people even thought of the Asian American community. He encourages the community to take partisanship out of the equation, discuss issues, focus on what you can do, and step up to vote. Tricia Sung, Executive Director of the Asian Pacific American Historical Society (APAHS) and the Asian American Peace Officers of Georgia (AAPOG), also participates with the League of Women Voters at citizenship ceremonies. Emily Oh, Director of Communications for the GA House Democratic Caucus (Stacey Abrams office), connects with the media. Estella Kramer of UPS is active in diversity leadership development. Lillie Madali of the City of Atlanta Mayor's Office is part of the task force for Legislative Day at the capitol and for creation of a commission on Asian Americans. 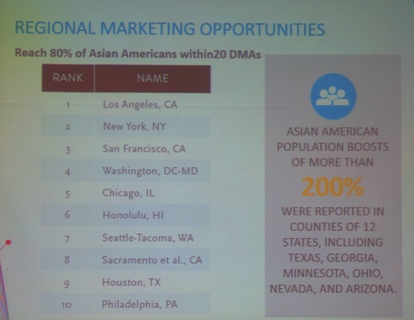 Helen asked why the community, with its history of strength and courage, seemed timid and not engaged after immigration—are we doing too well in general to feel the need? Responses came: the first immigrants felt marginalized and kept quiet to feel safe; now communities foster emotional ties to their home countries and focus less on involvement here.

Suggestions followed: in Asia our groups seldom come together, but in America where democracy fuels personal participation and we are minorities, we can easily come together to discuss these issues; people in the know should share information about openings on boards and other public service opportunities; transfer our wonderful community service at church/temple into the larger community; show Asian American accomplishments to the larger community where they are less often seen; document our history here; since Caucasian Americans see Asian Americans as one group, more connections amongst Asians for pan-Asian groups could give more clout; we must participate for our children's comfort in society. One participant noted that "we retreat into community" but "the opportunity to speak out feels extraordinary, so "we need more opportunities so it will not be extraordinary!" 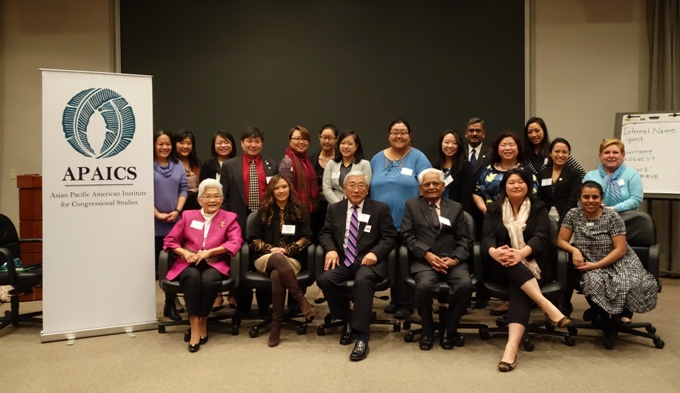 Laila Mohib (1st row, right) and Tony Patel (back row, 5th from right) were among those participating in the APAICS Day of Dialogue/Policy Summit in Atlanta. (Photo: Suzanne Sen)

As more and more Asian Americans become active, not only in their own community, but in connecting their community with the mainstream in areas of action such as politics, education, and various reforms, each instance of connection, interaction, and action not only has specific results, but also builds to change the perception and focus of the mainstream so that better understanding and resolution of issues can result. The information, tools, and opportunities presented at these AIPACS programs are giving power to individuals to use for betterment , not just of Asian Americans as a whole, but of each group (e.g. South Asians) and nonhomogenous subgroup (e.g. Indian Americans) with their particular situations. Clearer pictures of the community are being developed, and both the images and the realities pictured are changing with time—and with the efforts of participants such as these.

Link:
SIGNIFICANT, SOPHISTICATED AND SAVVY: THE ASIAN AMERICAN CONSUMER, 12-3-2013.
As the fastest growing multicultural segment in the U.S. with an outsized impact on the consumer marketplace, Asian Americans have emerged as a powerful economic force. The group’s buying behaviors and viewing patterns, however, are different and unique from the total population.

The segment has grown at a rate of almost 58 percent between 2000 and 2013, mainly spurred by immigration. This is more than 4.9 times that of the general population. On top of this, the average Asian American household’s income continues to soar and represents the highest of all multicultural segments. Their spending power outpaces even that of the coveted Millennial demographic, those currently in their 20s and early 30s, by nearly 40 percent.

Culture, value, efficiency, convenience and a strong emphasis on the family shape the buying behavior of Asian Americans and often drive their purchasing decisions. This includes the types of stores they visit, the number of trips they make and their online habits. Asian Americans make up the leading segment of online shoppers, with 77 percent making internet purchases in the past year, versus 61 percent of the general population.

For marketers, understanding the Asian American population is critical for realizing the bottom-line potential of many key product and service categories.

[This AroundTown report was updated on 3/15/14 with the above report on bullying of Sikh children.]