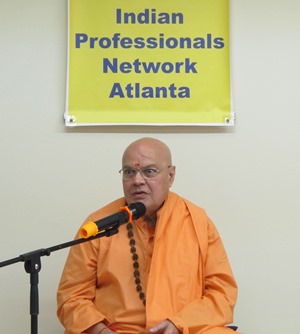 Swami Adhyatmanandaji is a guru who imparts knowledge of the ancient cultural and spiritual heritage of yogic science, encompassing asanas, pranayama, and meditation. He speaks on management, yoga, stress management, and self-improvement at national and international organizations such as Ahmedabad Management Association, Sardar Patel Institute of Public Administration, and Lions and Rotary Clubs. An icon of inspiration and service to youth, his contribution to free them from drug addiction has brought him recognition. His lectures are sprinkled with appealing anecdotes.

On July 10, Swamiji spoke on “learning tips to lower tension and stress.” He said that stress is made from a situation, and not a reality. You create stress. He exhorted the audience to be simple, try to be humble, try to be noble, love all, hate none, hurt none, be good, do good, be kind, and be compassionate, as well as to pray and meditate regularly.

On the second day, Swamiji spoke on “the power of communication.” The moment you know the power of communication, he said, your lifestyle and understanding will change. Communication won’t be a common phenomenon—it is a way of life. Giving tips, he said to be powerful while communicating. Do your best, and leave the rest. Never condemn any one. Praise people. Be kind, be courteous, love people, be soft. Try to understand the value. Never give humiliation to anyone. Generosity is essential.

Speaking on “learnings from Indian scriptures” on the third day, Swamiji said scriptures are a path to blessedness, a light and life to us. Scripture teaches us not to have vanity. Love the last person of society. When we follow scriptures, we live a divine life. 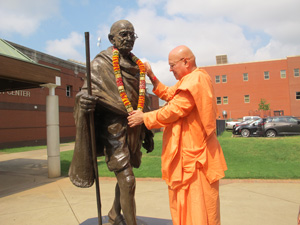 Swamiji also visited the Dr. Martin Luther King Jr. Historical site, paid homage at Mahatma Gandhi’s statue, and laid a wreath at the crypts of MLK Jr. and Coretta Scott King. Swamiji spoke about liberty and freedom, and also exhorted the gathering at the Gandhi statue to connect with the root in order to stand. You will beautify yourself. If you uproot yourself, everything will be wiped out. 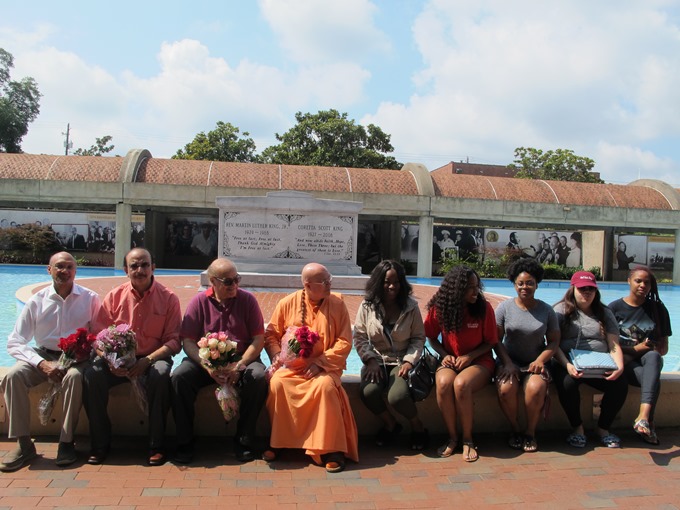 Referring to the recent happenings [racist demonstrations], Swamiji advised the gathering to be positive and never find fault, never condemn. Love is the only key to protect every one. Love is not kissing and hugging: love from the heart. Never give up truth. Never be bitter to anyone. Prayer is the only answer, he said. Sooner or later, prayer will be answered, as Mahatma Gandhi said. 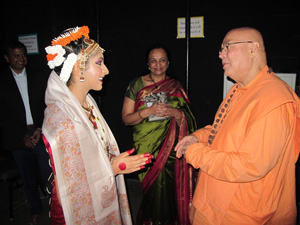 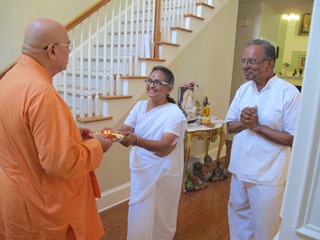