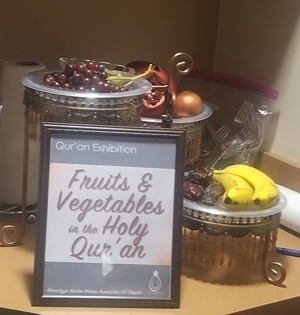 (Left) An exhibit on some fruits and vegetables in the Qur'an.

The Women’s Auxiliary of the Ahmadiyya Muslim Community, GA chapter presented a successful Holy Qur’an Exhibition on Sunday, February 10, 2019 at the Five Forks (Gwinnett) Library. The purpose was to introduce local residents to Islam and identify commonalities between Islam and the other major religions of the world. The goal was to raise awareness, erase misconception, and enlighten people about the True Islam.

The Hospitality Team welcomed all guests with a smile and directed them to the sitting area where the program started with the recitation of the Holy Qur’an. Then a video was shown with introduction and preservation of the Qur’an, and guests were directed to see the showcase with translations of the Qur’an in more than 50 languages. Guests were pleasantly surprised that there were translations in languages such as Kashmiri, German, Telugu, Igbo, and Fijian. Soniah Kamal, author of the recent novel Unmarriageable: Pride and Prejudice in Pakistan, visited the event and was amazed at all the translations. She took pictures of pages from several of them to share on her Facebook page. 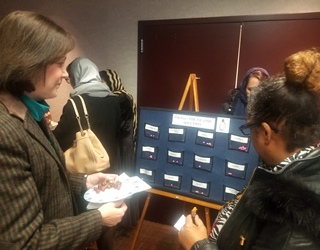 (Left) Voting at the #MeToo station.

The Qur'an exhibition had a #MeToo station for guests to vote for the best solution to end harassment of women. Ideas were kindness, truthfulness, morality, modesty, chastity, safe work place training, accountability, honesty, antiharassment training, lowering the gaze, respect, and keeping good company. Truthfulness was most voted solution by the end of the day. When asked the reason, they replied, “If you know you will always have to speak the truth, you will shy away from any wrongdoing, thinking if I am asked about it, I can’t lie, and truth will make me look bad”—so the wrongdoing would stop.

Several interactive booths were set up about Qur’an and modesty, education, jihad, Mary (peace be upon her), and marriage. Two students who were raised as Catholics mentioned that the more they had delved into religious texts like the Bible and the Qur’an, the more similarities they see in the teachings, such as modesty for women and caring for the neighbor. That’s when it was explained that the teachings themselves come from the same source, the One God. Another guest, Professor Heidi, was interested in contemporary issues and she was recommended a related book Islam’s Response to Contemporary Issues which was gifted to her the next day.

One of the guests wanted to know why we say “peace and blessings be upon him” (PBUH) to the Holy Prophet and Allah? This misconception was clarified that we say PBUH to all the prophets, not Allah.

One lady was impressed with the hijab experience. She shared that she prays with her head covered. When asked, she said that it has not been dictated to her by her faith but that she can feel the power in her prayers when she covers her head. She also mentioned that she loved the idea that we stick to a tradition; and that our religious observances do not change with the fads of the day.

(​Right) An area with kids' activities.

Another lady was just returning library books and ran in with her husband when she saw the exhibition from outside. She said she was about to purchase the Qur’an from Amazon that morning and could not believe it was a coincidence. She had many Muslim friends and was concerned with how media portrays Islam. She was happy to see Muslim women answering questions about Islam as it showed that Muslim women aren't locked up in their homes. They have a voice and use it just like at the exhibition. She was given a copy of the Qur’an and expressed much excitement and said while holding it, “I feel like I've won a prize! I am so incredibly grateful! Reading tonight.”

Some guests admired emphasis on jihad (struggle) of the “pen, not sword.” A few of them did not know that the greatest form of jihad (struggle) is self-reformation, the struggle against our own temptations, such as greed, lust, and other worldly temptations. They were told that once while returning from a battle Prophet Muhammad (PBUH) reminded his followers that they are returning from the jihad of a lower order to jihad of the highest order, that is, that they need to resume the effort of self-reformation without delay.

Three guests asked questions about the Advent of Imam Mahdi (second coming of Prophet Jesus, PBUH) and picked up free literature on this topic. One literature table was set up with different issues of The Review of Religions, and many guests visited it. They especially admired the issues, “Muhammad, the Liberator of Women” and “The High Status of Women in Islam.” Both issues were gifted to them.

Questions were answered regarding the tribes of Israel, death and migration of Jesus (PBUH), and each guest was provided the web address (www.alislam.org) as a reference site with books and articles.

The visitors lingered, talked and learned for hours. Response to the exhibition was overwhelmingly positive, which tells us that Southerners are willing to engage in discussions about religion, free of rancor and negativity. 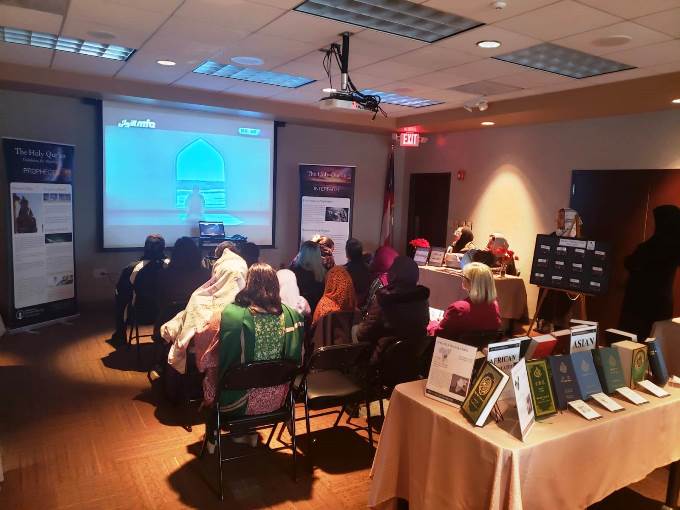 Link:
"Islam provides some answers to our #metoo problems."
https://www.charlotteobserver.com/opinion/op-ed/article194956804.html

[The article above is a Website Bonus Feature, appearing only on the website for March 2019, not in the print/digital issues.]