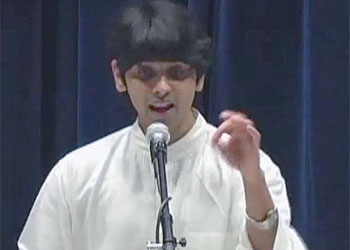 Raag & Emotion was a unique event illustrating how raags evoke different emotions within the listener. Research done in the field of psychophysiology demonstrates how music can cause emotional responses in listeners—experiences such as sadness, fear, happiness, or tension. And in the ancient literature of India, the theory of rasas or emotions was well-developed in Bharata Muni’s Nātyasāstra, or dramatic theory. The theory of rasas still forms the aesthetic underpinning of all Indian classical dance and theatre, such as Bharatanatyam, Kathak, Kuchipudi, Odissi, Manipuri, Kathakali, Kudiyattam, and others. But can a raag or a specific combination of notes evoke an emotion when sung or played on an instrument?

As Adwait Joshi said in this well-scripted program, there are several mythical anecdotes about the power of Indian raags. According to a legend, the Mughal emperor Akbar once asked his court musician Tansen to sing raag Deepak, the raag of lamps. All the lamps in the courtyard lit up themselves, and Tansen's body became so hot that he had to sit in the nearby river to cool off. However, the river began to boil, and it became apparent that Tansen would soon boil to death. He set out on a search to find someone who could cure him. In due course he reached Vadnagar, in Gujarat, where he found two sisters, Tana and Riri, whom he asked for help. They agreed to sing raag Malhar to cure him. When they sang the raag, rains came down in torrents, which cooled Tansen's body immediately!

We certainly didn’t need Malhar that Sunday evening, August 6, 2011, as the torrential downpours, just before the concert, caused delays in traffic and a half-hour wait for the few listeners who had reached the Students Center in Georgia Tech early enough. As Pritam Bhattacharjee sang raag Puriya Dhanashri, the listeners settled down to “experience” a smorgasbord of emotions—starting with sadness or pity (karun rasa) which this raag is supposed to depict. I myself associate this raag with the feeling of quiet and beautiful melancholy at twilight after sunset—but maybe that’s because I have been taught to think about this raag that way. And in any case, much of music and melodies that move us have karun rasa: “our sweetest songs are those that tell of saddest thoughts,” as Shelley says.

Another twilight raag, Marwa, followed—which is supposed to be serious. It makes me feel grey and gloomy compared to raag Puriya Dhanashri. A much more positive emotion was evoked in the next raag, Dhanashri, a rare combination of shuddh or natural notes that is sung in the Mewati gharana of Pandit Jasraj. This raag is said to evoke the shringara rasa or the feeling of love. The first half of the concert ended with raag Yaman, in which Pritam sang a self-composed bamayana bandish—a composition where the notes of the bandish follow the syllables of the lyrics. Raag Yaman is said to be peaceful, or evoke the shanta rasa, and Pritam’s bandish was very calm and meditative.

After the brief intermission, we were treated to a slow or vilambit composition in raag Darbari Kanada, which evokes the adbhuta rasa or feeling of wonder and curiosity. This was followed by the famous bandish “Mata Kalika” in raag Adana, depicting raudra rasa or anger. Raag Malkauns brought out veer rasa or the feeling of courage, and finally Bhairavi was sung to represent bhakti rasa or the feeling of devotion—a rasa that was later added to the original eight rasas in Bharata Muni’s Nātyasāstra. There are a large number of bhajans and devotional songs that are set to this raga, perhaps causing or perhaps because of this association?

Pritam was accompanied on the tabla by Prithwiraj Bhattacharjee, disciple of Ustads Zakir Hussain and Allah Rakha. Pritam and Prithwi are faculty of the Pandit Jasraj School of Music in Atlanta. Accompanying them were their students: Usha Joshi Balakrishnan, Mahua Banerjee, and Adwait Joshi on vocals and tanpura, and Amitava Sen on harmonium. Adwait Joshi compèred the program.

Organized by SwarGanga, this was a unique presentation that not only entertained, but also enlightened the audience. Whatever emotions the listeners actually experienced, I can say for sure they did not experience some of the other emotions in the list of ancient India’s rasas—those of hasya rasa (sarcasm), bhayanak rasa (fear), or bibhatsa rasa (disgust).