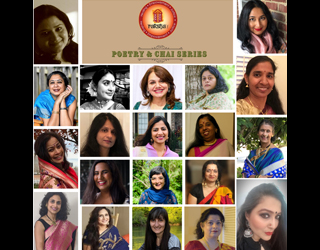 An online poetry series was organized by Raksha, Inc., the Georgia-based nonprofit organization working
for South Asian survivors of violence. This “Poetry & Chai Series steeped in South Asian roots and flavors, infused with the values of hope and resilience” created a platform for local poets to showcase their poetry.

In the pre-pandemic world, the poetry event was envisioned as a poetry circle for community to gather over tea and conversation. But as pandemic continued to wreak havoc, the event took shape as an online seriesof poetry videos premiering every weekend. Starting as a one-time event on May 29 with five poets to commemorate the Asian American Pacific Islander Heritage Month, it grew to become a weekly series featuring twenty poets and running for over two months through June, the Immigrant Heritage Month, andfurther on till the end of July.

“Life is tough but so are you. Prove them wrong. Don’t ever give up. These cups from which you drink your chai, fill them with liquid courage, kissed with spice.” These concluding lines from the opening poem by Atlanta-based author and poet, Soniah Kamal set the stage for courage and resilience that event endeavored
to evoke in these trying times.

Curated by local poet and author Pooja Garg, the series grew to become a debut platform and poetry circle for South Asian poets from across Atlanta. Featuring twenty poets reading their poetry in ten South Asian languages including English which is also widely spoken in South Asia, the series also featured ‘Poets reading Poets’ segment, where participating poets shared works of poets that inspired them—both classic and contemporary but all equally thought-provoking.

The poems in the series connected with the South Asian sensibility and demonstrated the power of poetry in taking the lid off suppressed ideas and difficult conversations. Anubhooti Kabra, Sangeeta Deval, and Sandhya Bhagat’s poems addressed underlying gender role conditioning. Gayatri Sethi and Nandita Godbole’s poems took the motif of chai to explore its association within South Asian culture. Jeya Maran and Bhrushira Vyas’s poems hailed the power of the feminine. Chaitali De’s poem portrayed the female spirit that quietly bears the burden of societal norms while Sadaf Farooqui in her poem asked to be met on equal terms. Sunita Theiss’s poem spoke of bicultural experiences and Sarika Jaswani’s poem of generational wisdom. Beena Deshpande and Shilpa Agrawal’s poems were a tribute to mother-daughter relationship. Sneha Talika’s poem invited us to look within while Shilpa Agrawal’s poem asked us to look outside towards the socially disadvantaged. Anjali Enjeti’s readings from the works of black poets honored
the movement for black lives. Chandran Bai Oad’s poem dealt with domestic violence and Pooja Garg’s poem spoke of healing and growing. Jyothsna Hegde’s poem reflected on the lessons learnt in times of coronavirus and Alka Mahendrakar’s poem on how to cope in these times and be okay with not being okay. 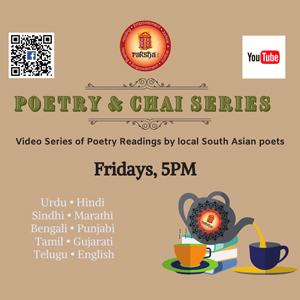 As the series headed for a poetic pause in the last week July, 2020, Aparna Bhattarcharya reflected on the platform it created for South Asian voices and the window it provided for the community to get acquainted with the works of talented local poets and authors. “In a span of two months, the event has achieved more than we imagined and brought forth so many powerful messages and voices and created conversations.
We are so grateful to the poets who participated in the series and encouraged viewers to support Raksha’s mission. This event was a beautiful way to highlight talented local poets and authors, whose words inspired and filled our hearts with hope and resilience,” she says.