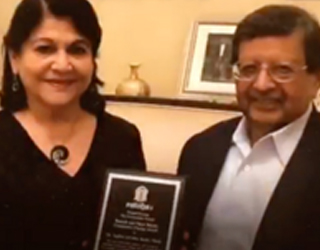 Raksha celebrated its 25th year of incorporation and service to the South Asian communities in metro Atlanta by hosting its annual fundraiser event Ek Shaam Raksha Ke Naam on December 3, 2020 as a free virtual event.

Since 2012, Ek Shaam Raksha Ke Naam has traditionally incorporated music and dance with community spirit and camaraderie that aims to bring together the South Asian diaspora in celebration of Raksha’s mission and cause. This year, the theme was “Rising to Resilience,” and the pre-event segment was kickstarted by foot-tapping fusion of Bollywood, hip hop, and techno music by Atlanta-based DJ Jaz (GTB Productions). The event also featured an uplifting rendition of the famous song, “Yeh Honsla” in the magical voice of the popular Atlanta-based vocalist, Purnima Rai Mathur to symbolize the resilience and undeterred hope as part of Raksha’s work in 2020.

Raksha’s Executive Director, Aparna Bhattacharyya, expressed thanks to the community members and organizations for their continued support and dedication over the past 25 years. This has been especially notable during the pandemic which has enabled Raksha to have spent over $100,000 in supporting the emergency needs of its clients.

Like every year, Raksha also presented awards in honor of dedication, courage, and commitment to Raksha’s mission. With the Seeds of Change award, Raksha recognized Vladimir Samoylenko for helping Raksha clients file for their taxes since 2014. Dr. Jagdish and Madhu Sheth were presented with the Ramesh and Vijaya Bakshi Award for their commitment to the community and support to Raksha’s mission through the years. Dr. Sheth highlighted that issues of gender inequality and gender-based violence are often not addressed and thus reiterated the need  for the critical services Raksha provides. Raksha also honored a survivor, Anjali Khambete with the Himmat Award. Himmat in Hindi and Urdu means courage. Anjali gave a powerful speech while accepting the award that chronicled her struggles as a survivor and was addressed directly to survivors experiencing abuse, to abusers, and to the larger community that normalizes abuse.

The event also had many fun moments. Raksha board members shared their musical talent with a Bollywood Antakshari, the musical medley. The event program was interspersed with trivia questions on Raksha milestones and facts, throwing light on lesser- known facts about the organization. The night ended with a message from Sonia Sharma, one of the founders of Raksha, who gave a historical perspective of Raksha’s early days and the continued importance of supporting the organization for its empowering work in the South Asian community.