Rath Yatra at the Hanuman Temple 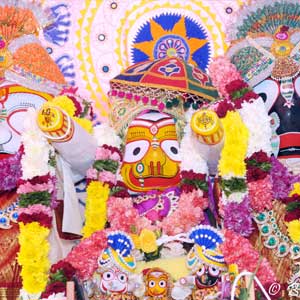 Ratha Yatra was celebrated at Hanuman Temple – Alpharetta on July 13, 2013. About 600 devotees participated in the auspicious event. SaReGaMa singing superstar Sniti Mishra brought melody to the occasion by singing devotional songs. Swami Adyanada Saraswati from Nashville performed the rituals as per Puri Temple guidelines for 6 hours before the Ratha Yatra.

The word Jagannath is formed as the conjoint (sandhi) of the two words jagat (universe) + nath (Lord). He is also addressed by several other names Chakadola (circular eyelid), Kaalia ( for his amber complexion), Jagabandhu (friend of universe), Paitapaban, and myriads of other names by his devotees. He is considered as a form of Lord Vishnu. Inside the temple his idol made of daru (wood) is accompanied by his elder brother Balabhadra and sister Subhadra.

Jagannath culture is a way of life that envisages devotion and respect for elders, affection for children, and invokes us to do the right things and follow the path of righteousness and justice. It is as simple as that. It sees God in every object, in its endless and infinite form. It is not limited to any boundary, national or international. Jagannath belongs to the whole universe. 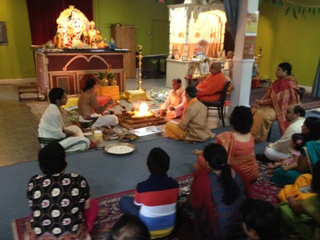 The coastal township of Puri is famous for its Jagannath temple, one of the chaar dhaams or the four sacred abodes of God (the other three being Badrinath, Dwarka, and Rameswaram, all revered by Hindus). Puri's temple was built in 11th Century by King Chodaganga Dev from the Ganga dynasty. Legend has it that the previous temple was built by King Indradyumna many centuries ago.

Lord Jagannath is offered chappan bhog (56 kinds of food) as offerings but the mahaprasad (great food offering) also known as avada tops it all. It is cooked in earthen pots using fire wood, without garlic, onions, or veggies of foreign origin, e.g. potato, tomato, cauliflower, cabbage, etc. Its unique appetizing smell and taste is attributed to Lord's mahima (miracle). Inside the temple in anand bazaar (market of happiness) everyone irrespective of caste, creed, or class can seat and eat together as equals. The aim of Jagannath culture is to bring all people into one family—vishwa manava dharma (world humanitarianism). 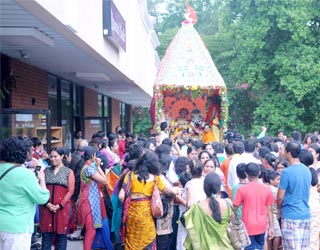 Rath Yatra (the Car Festival) is held in June or July depending on the auspicious occasion per our Hindu lunar calendar. The most famous is Rath Yatra in Puri, Orissa. Lord Jagannath is regarded as one among us. Like a normal human being he eats, takes a shower on snana purnima (full moon day for bath) and falls sick. He suffers from fever for several days until on the day of Rath Yatra he travels to his mausi's (mom's sister's) house a few miles away, sitting on a chariot named Nandighosa. His brother Balabhadra and sister Subhadra also travel in two separate chariots. The King of Puri sweeps the top of the Lord's chariot using his golden broom. All three chariots are pulled by hundreds of thousands of devotees thronging badadanda (Broadway) of Puri amidst beating of ghanda (brass plates), dhols (drums) and blowing of sankha (conch shell). During British rule, the English were appalled at devotees throwing themselves in front of the chariot with the belief of being assured a place in heaven (juggernaut from Jagannath may be the only word in the English lexicon which originates from Orissa, meaning a heavy vehicle on the roll).