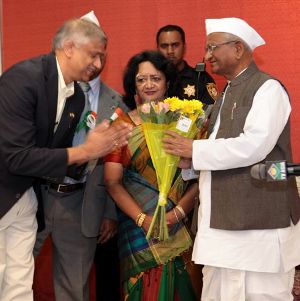 Shiv Aggarwal welcomed all, saying, “We are very proud to have Anna in Atlanta. …He has awakened the hearts and minds of Indians for eliminating corruption. Just like we all celebrated Swami Vivekananda’s 150th Birth anniversary and just as he said, ‘arise, awake, and stop not till the goal is reached,’ we are here with Annaji to reach that goal which Swami Vivekananda had envisioned.”

Nitin Shah introduced Anna: “Once in a lifetime we get an opportunity to meet a man who comes once every hundred years. If Gandhiji was that man for 20th century then in Anna we have one in the making for 21st century. Kisan Baburao Hazare was born in 1940, in Ralegan Siddhi in Maharashtra. In 1962, when Indo-China war broke out, the then Prime Minister of India, Nehru asked all young Indians to join army. When Hazare was on active duty at the Khem Karan border, he lost all his colleagues. As Anna was the lone survivor, he thought that God had a plan for him. At the age of 26, he decided to dedicate his life for betterment of Indians and humanity at large. Anna has no home. He lives a simple, spartan life of service to the people of India. He believes in Gandhi’s principle of upliftment of India’s villages. He believes that villagers need to change if the villages are to become self-sufficient. Anna and his colleagues worked hard to transform Ralegan Siddhi into a model village, which attracts lakhs of visitors from all over the world to see what he has accomplished. In 1992, he was bestowed with Padma Bhushan Award for his exemplary services. In 2002, Anna turned to tackle official corruption. He played a significant role in the movement which forced the Maharashtra Government to enact a stringent Right to Information Act. The RTI Act helped in resignations of six Ministers and four hundred corrupt public service officers. Now Anna is trying to exert pressure on the Indian government to enact a stringent anti-corruption law, the Jan Lokpal Bill.” Nitin concluded his introduction with “What can we do to help you accomplish your Mission?” 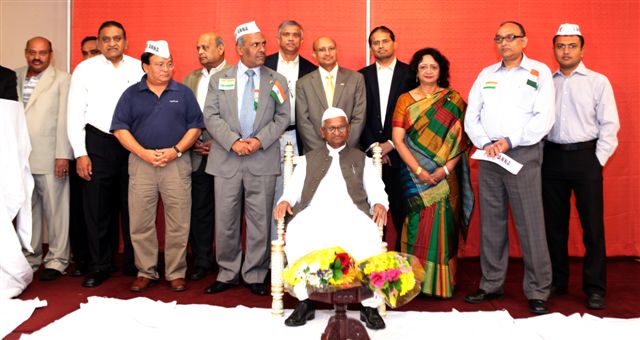 Anna began his inspiring and thought-provoking speech in Hindi with his warm greetings to the Swamis and the attendees. “At the age of 26 I began to ponder, ‘Why are people constantly trying to accumulate material possessions and running in an endless rat-race and trying to seek joy which is transient?’” After reading Swami Vivekananda’s book, he realized that to attain ever-lasting ananda (inner joy), one’s purpose in life should be service without expectation of any rewards. “I strongly believe in manav sewa (service to fellow human beings). I resolved to transform Ralegan Siddhi village, which was ridden with crime, violence, illiteracy, and unemployment. I and my colleagues tackled problem of alcoholism. We closed down 40 illicit liquor brewing units. Since past 16 years the shops in this village stopped selling cigarettes, bidis, chewing tobacco, alcohol, or other drugs. 80% of the population was starving because of poor cultivation due to lack of rain, soil erosion, and droughts. We saved every drop of rain through soil conservation and water conservation projects. As a result, from 300 acres of water-starved land, now we have 1500 acres of fertile land. Gandhiji said that growth of India’s economy depends on growth of India’s villages. And I firmly believe in that. I later tackled problem of rampant corruption because for rapid development corruption needs to end. In 2002, with the help of RTI Act, we were able to get rid of six corrupt cabinet ministers and 400 corrupt Government officers. Various other big and infamous scams have also come to light since then. Sadly the Government is stalling the passage of a strong Jan Lokpal Bill but I have embarked on a grassroots crusade, currently touring in Punjab, Haryana, Rajasthan, Uttarakhand, Uttar Pradesh, and Madhya Pradesh. Later I will tour other parts of India.” He continued, “I am planning to unite sixty million Indian supporters and then be back at the Ram Lila Maidan and we will tell the Government, ‘Jan Lokpal lao nahi to jao’ (Either pass the Jan Lokpal Bill or quit). I have resolved that I will not die till Jan Lokpal Bill is enacted.” (Laughter and applause).

“I do not need financial help from you. I just need your sincere commitment to the cause I am fighting for, What I am looking for is technical guidance from you. U.S.is known for its technical knowhow, especially in social media. With your help in this expertise, we can achieve widespread and quick support. I again thank you all for attending this elegant luncheon reception.” Anna concluded his passionate remarks amidst cheers, applause, and shouts of ‘Bharat Mata ki Jai,’ ‘Vande Mataram,’ and ‘Inquilab Zindabad.’