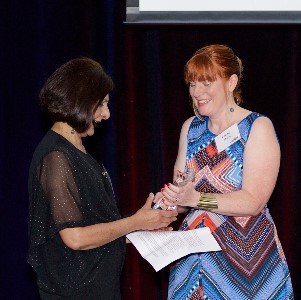 New American Pathways, a refugee resettlement organization, has honored Dr. Gulshan Harjee, an asylum seeker herself, for her efforts in providing medical care to refugees, as well as advocating for their resettlement.

On August 18, 2018, an electric mix of socially conscious individuals and refugee resettlement advocates gathered in the Oceans Ballroom of the Georgia Aquarium for their sixth annual fundraising celebration, “Red, White, and NEW!” Some were friends with those on the board of the hosting organization, some were donors, some were volunteers. What united all of them were memories of refugee policies becoming skewed. Once patrons Mike and Deanna were questioned on their earliest memory involving Georgia’s refugee response, they replied, “We’ve lived here 3 years. I don’t think it [refugee resettlement] was on the forefront of our minds until refugee policies come up. I don’t think there was a reason. Probably 2016.”

The event set records for both attendance and donations, and with a live and silent auction, raised over $230,000 for refugee resettlement. Attendance increased by about 20%, and fundraising exceeded last year’s total by 15%.

At 8:46pm, a woman of color stepped onto a stage to a standing ovation. She embraced and accepted the Friend of Freedom Award from Jodi Rausch, New American Pathways Board Member and Chair of the 2018 Red, White and NEW Event, as she manned the podium. Wearing all black, paired with bedazzling earrings, “this little girl from a village in Tanzania” was now amongst Georgians and Atlantans who, too, cared about refugee settlement.

Poised at the podium in the middle of Georgia Aquarium’s Oceans Ballroom, Dr. Gulshan Harjee’s measured tone gave way to her words of being born in a village of 500, fleeing from war to Pakistan for high school, running from war for Iran so she could have a shot at a college education, and finally, with the Iranian Revolution, slowing down in her passage to the United States, as if the offer from Morehouse was one that not only expanded her horizons, but gave her a chance to catch her breath. She spoke slowly Saturday night, into the near-capacity ballroom, and to the enthralled audience. The alternating blue and red colors in the room spread the same warmth found in Dr. Harjee’s tenor.

A drink was being served in her honor—The Tanzanian—grapefruit vodka, sprite, cranberry juice, and lime. It was the sole cocktail available. Her name tag rested front and center on her dress, but truthfully Dr. Harjee could have gone without it. Her work in the community has made her face readily identifiable. Her speech ended at 8:54pm to raucous applause, and a lasting sentiment.

Khabar magazine caught up with Dr. Harjee to discuss the global refugee crisis, her earliest memory of refugees, and where she sees the state of the crisis in 10 years.

What is your initial impression about the refugees that Georgia has welcomed?
The New American Pathways, as you know, is a refugee resettlement organization. Coming to this event is a reminder of the people that are involved, that do all the good work. They should be surrounded by their supporters. That’s what this event is all about. We need to support the organizations that are involved in the resettlement of refugees.

What is your personal earliest memory of this refugee crisis?
I have been around refugees myself for a long time. Myself, I witnessed refugees when I was in Tanzania. I witnessed them in Pakistan. Coming to the U.S., I’ve met refugees. The refugee concept is pretty much worldwide. Historically, it’s been here for many years. People have been displaced for years due to war, illness, plague, persecution. This is a phenomenon that has been going on for years.

What is the latest being done (or not done) to accelerate the refugees’ cause?
We have to understand that if refugees are not coming to our country, they are bottlenecked somewhere. They are bottlenecked in camps. We are retarding their progress. We are retarding the opportunities that these kids could be getting in education and healthcare. We are losing time. This is time sensitive. We are losing a whole generation of kids who are going to be lost. We are losing a whole generation of people who are going to continue to be in difficulty if they are not allowed to resettle quickly. Every person, every family has the desire to live a better life. By us not bringing these refugees, we are retarding the progress of millions of people who could actually be an asset to this society.

How has your background in medicine and your work as a physician informed your worldview on refugees?
Having traveled as much as I did since a very early age, as you know, I was kicked out of my country, literally, when I was of age 18. There was nationalization, socialization. Having been a 2nd generation Asian, I was born in Tanzania. I had a Tanzanian passport. I was no longer wanted in my own country of birth. I have experienced these hardships. In these forming years of my life, I was moving from country to country by myself, without my parents. I have seen people that are displaced. I have seen what hate and war does to families. I have seen the separation of children from their parents, families. I have seen what being separated from parents does. Sadly we are seeing a repetition of history that we should not be seeing today.

But as a physician, I have been greatly involved in the healthcare of refugees because I speak 6 languages. At the practice I founded in Decatur, we speak 15 languages. My dream was that I should be able to reach out to anybody, whoever needed me. I would be there, whether they had health insurance or not, money or not. I was going to be inclusive. I was going to see anybody and everybody who needed a doctor. I cannot be more grateful to this country for giving me the opportunity, for giving me a great education, and for being able to carry out the work I set out to do in the first place.

Having been an asylum seeker myself and now a physician, it is my moral duty to give back. That is another reason I joined hands with Dr. [Saeed] Raees to found The Clarkston Community Health Center for refugees and other marginalized communities, to provide free comprehensive primary, dental, and mental healthcare along with free prescriptions.

What is the best advice you can offer young people looking to get involved in refugee resettlement?
I think this is humanitarian, it’s the right thing to do, it’s a good thing to do. It is the core value of every Abrahamic religion, every Abrahamic faith. The core value is loving your neighbor. Look, any gifts that you have, of treasure, of time, of knowledge. We are trustees of what we are given. For the younger generation, all I have to say is, as and when you can, share your treasures. Whether it’s your time, your talent, whether you have a little bit of money to give, we should share and lend a hand so that every child and every person should be able to reach their full potential.

What does tonight’s award mean to you?
I’m humbled. This is a very big deal for me. I grew up in a village in Tanzania, a village of 500 people. To be in the most powerful nation, the most compassionate nation in the world, and to be standing at the podium where a Congressman stood is very, very humbling for me. I just hope that I can live up to it, and the responsibilities that come with receiving an award.

Where do you see the state of refugees in 10 years?
I want to be very hopeful. I want to be very positive. We are hopeful. I think things are going to change. All countries in this world, with the exception of a couple, are open to refugees. In 10 years, some things will change. I have a great faith in the leadership that is to follow in the next ten years. We can allow people to live in their own countries, in the comfort of their cultures, in the comfort of their lands and birthplaces, and I’m thinking perhaps the refugee crisis will not be as it is today.

We hope that with diplomacy and dialogue, we will be able to handle the refugee crisis better with the generational change in leadership. However, the refugee flow will remain due to conditions outside our control, i.e. tsunamis, disease, flooding, and earthquakes and such. Ultimately, it brings out the best in us… our humanity!

The Oceans Ballroom of the Georgia Aquarium. (Photo: Randmc Photography)

Clarkston and Dr. Harjee’s response to the 2017 executive order on immigration
February 2017
http://www.gpbnews.org/post/clarkston-refugee-order-brings-economic-uncertainty

Dr. Harjee offers a scholarship for high school seniors interested in pursuing a career in the healthcare field
http://www.dekalbmedical.org/news/2018/04/dekalb-medical-now-accepting-applications-for-dr-gulshan-s-harjee-scholarship