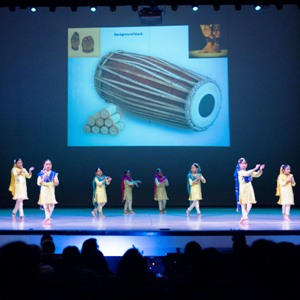 The traditional invocation for blessings from Lord Ganesh was followed by tarana in raga Mishra Ghara highlighting the Indian bamboo flute, bansuri. With Apurva Shrivastava on the melodious flute, the precision of the pakhawaj and the tabla was rendered by Phil Hollenbeck and Naren Budhkar. The students were up to the challenge and performed with equal ease and precision.

“Mohe Panghat Pe” was sung soulfully by Vibhuti Kavishwar and the students performed this with complete grace. Next, students familiarized the audience with different taals, and then highlighted Kathak patterns. They concluded the item with 76 ch akars (spins), a feat for professionals only! Ghungroo, or ankle bells, were masterfully played by Jayur.

A long technical delay ensued, but once resolved, the program continued with its dazzling performances. Then the harmonium, dholak, duff, madal, duggi, and dhol were highlighted in the Sufi style renditions of “Chap Tilak” and “Damadam Mast Kalandar.” Director Kumud Savla’s grace and footwork were a beauty to behold. Ganesh Jagtap played these instruments and guided the pace of the item. Raas lilted around the beautiful Gopis. Vocal and swarmandal were highlighted with “Sargam.” Mayuri, a peacock dance, introduced the sitar, masterfully rendered by Amitava Chattterjee. 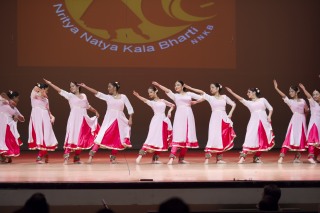 “Dil Cheez Kya hai” highlighted the sarangi: the ladies rendered this gracefully while Rohan Sharma was a delight on the instrument. Finally, fusion of Indian classical dance and flamenco was a masterpiece, choreographed by Samta Savla. With the pink and white dresses, it was beauty in motion. The melodies were composed by Sandeep Savla and supported by his students in a chorus and on keyboards. 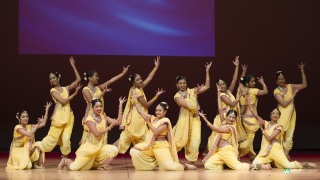 Next Samta Savla took us on a journey of the earth and the moon expressed through dance with the prerecorded segment, called “Journey through RhythmScapes.” The rivers were showcased with a dance that included “Sheila Ki Jawani” (with an unexpected twist of Maharashtrian fusion) and “Pareshaan,” with Chinese fans. The fields and the mountainous regions were brought to life through “Morni Baga Ma” and the Kashmiri dance. The exquisitely dressed dancers brought the Indian topography to life. The desert had “Dholna” (with the youngest students) and “Mashallah” (with swords) while the cityscapes had “Disco Deewane” (from the boys) and “Parda,” choreographed as an Indian jazz style. The jungles had the tribal dance, a treat to watch as the children performed with gusto. The beauty of the moon was captured in “Apsara Aalee,” performed in a Lavni style.

The organizers included Parvez, Shahid Ali, and Anwar. The parent volunteers helped to keep the items flowing uninterrupted. A vote of thanks to the sponsors for their support in keeping the culture thriving.