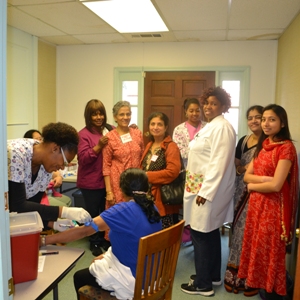 Blood work at the Sai Health Clinic for the Bhutanese in Clarkston. (Photo: Mahadev Desai)

Dr. Sujatha Reddy has been the driving force behind thirty Sai Health Fairs, providing free and low cost medical services to the poor, uninsured, and underinsured. With her contagious enthusiasm and innate compassion and resolve to help the underprivileged, she tries to help whomever she can. And so during the harsh winter weather last year, her thoughts turned to the Bhutanese people in Atlanta.

The Bhutanese refugees arrived in Georgia in 2007, under the US Refugee Resettlement Program. Bhutan is a constitutional monarchy located at the Eastern end of the Himalayas, separated from Nepal by the Indian State of Sikkim. Many Nepalese migrated to Bhutan in the 1800s, settled in southern Bhutan, And became citizens of the country. However, in the past two decades, their citizenship was revoked, properties confiscated, and they were expelled because they were predominantly Hindus from Nepal. About 140,000 have lived in UN refugee camps for the past fifteen to twenty years. The US offered to settle 60,000 of these refugees over a five year period and Atlanta is one of the resettlement centers. A 1.1 square mile area of Clarkston, Georgia, is home to refugees from over 40 countries and 54 languages, with about 5,000 Bhutanese living there. SEWA International and 31 Georgia community organizations have helped these refugees integrate in the community at large, by helping with food, clothing, shelter, home appliances, toys, etc., and with driving lessons, English language classes, finding jobs, etc. But much remains to be done. Mother Teresa said, “We ourselves feel that what we are doing is just a drop in the ocean. But the ocean would be less because of that missing drop.” A firm believer in this, Dr. Reddy met with Ms. Manikala Basnet, President of the Hindu Buddhist Spiritual Center in Clarkston to ascertain how best she could help the Bhutanese community. From December 2013 onwards she loaded her car and made seven trips to the Temple with warm clothing, car seats, strollers, empty suitcases, etc. for distribution among the needy Bhutanese people.

The health fair was made possible by Sangisetty Charitable Organization and other professionals and volunteers. Dr. Reddy is already planning to do more for the Bhutanese. “Service to humanity is service to God” has been the guiding mantra for Reddy, who feels she is doing God’s work. 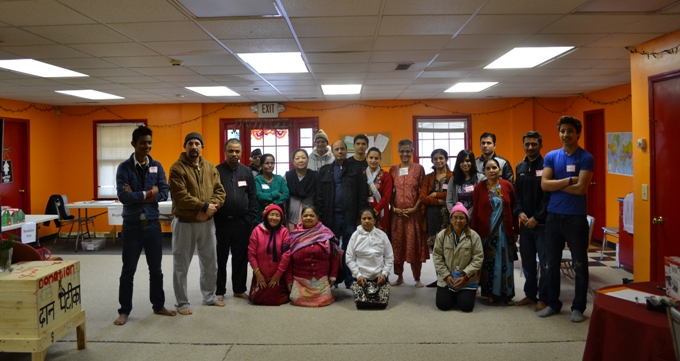