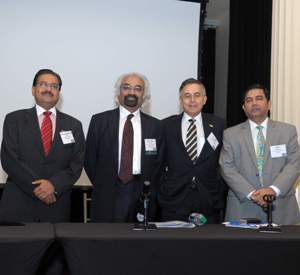 An early call was made by Hans Gant of the Metro Atlanta Chamber for finding specific ways to strengthen relations, create jobs in India and the US, and bring down barriers to cooperation. Growing specific industry clusters, especially biosciences, supply chain, manufacturing, and technology, was recommended. 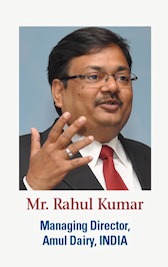 Consul General Ajit Kumar reviewed statistics and highlighted Kerry's visit to India and the memoranda of understanding on higher education. The MOU with Karnataka was also a topic as Dr. Jagadish Mittur, head of the Biotech Facilitation Cell, KBITS, Dept of IT, BT, and S&T, Government of Karnataka, formerly with Monsanto, spoke on developing India's “Silicon Valley.” Mr. Rahul Kumar, Managing Director of Amul Dairy, gave the interesting story of operations in India and now in the US (see more below). 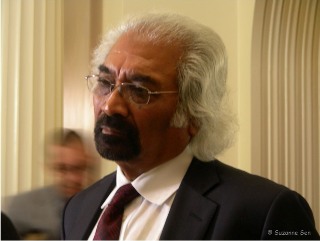 An inspiring keynote speaker was Hon. Sam Pitroda, Advisor to the Prime Minister of India on Public Information Infrastructure & Innovation (PII) and Chairman of the National Innovation Council, who noted that democracy thrives on debate and went on to challenge our path. “Today the world is at a crossroads,” he declared, since all the economies of the past really don't make sense. We've been trying to fix past methods, but really need a change because of the disparity between rich and poor. “The consumption-based model is not sustainable in India.” Billions are spent on the quality of a product, but we need to focus on quality of human beings. In India we cannot always focus on technology, but also on lifestyle. Skill development and innovation are needed, along with keeping the focus on the goal (our moral responsibility) of lifting people from poverty. “It is not about creating millionaires.” He is “bullish on India” because of the young talent there and delighted to be working with the US in solving the problems of the US, India, and the world. 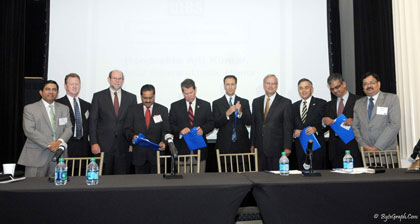 Taxes, exporting, government re- sources for businesses, immigration law, and film & new media were some of the many topics discussed. And for Atlanta, metro companies are encouraged to take a survey at atlanta.net/MEP/ to help develop an export plan for growing business in the area. 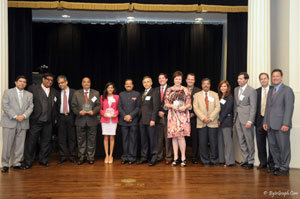 Rahul Kumar and Amul Dairy:
Cows in Indian villages are revered not only for religious reasons, they also make India the world's largest dairy producer.  And now Amul is coming to the USA—not with margarine, says Mr. Kumar, but with good butter (or ghee), paneer, yogurt, and ice cream.
http://www.globalatlanta.com/article/26495/indian-dairy-grows-global-brand-from-village-cooperatives/ 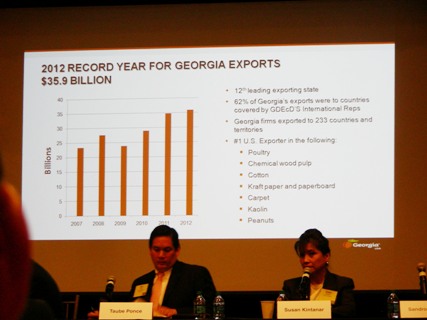 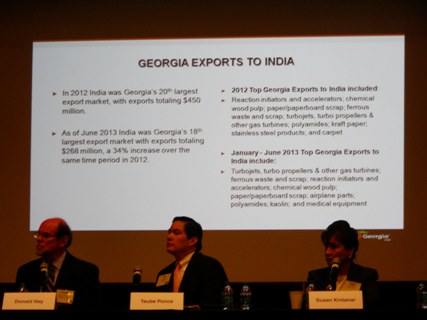 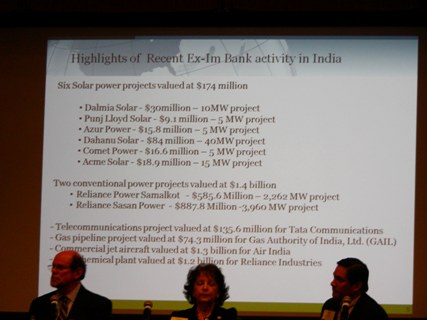 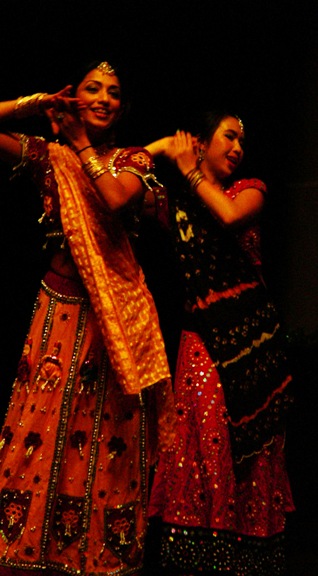 The reigning Mrs. Pakistan International 2013 and one of her dance troupe (bottom right). (Photo: Suzanne Sen)

The evening's entertainment was a dance program by Ms. Sanam Azeem and her students. Ms. Azeem is a professionally trained dance teacher, choreographer, and performer whose Atlanta-based troupe Sanam Studios performs in corporate and private events. Ms. Azeem is the reigning Mrs. Pakistan International 2013 and the first South Asian to make it in the top five positions at the Mrs. International pageant. In 2013 Mrs. International pageant, she was judged in the 2nd Runner-Up position, out of 70 winners from around the world. The dance styles performed at UIBS—a mix of Indian folk, Bollywood, gypsy, and Middle Eastern dances—were enticing enough to make Consul and Mrs. Kumar and others accept the invitation to dance in the aisles.