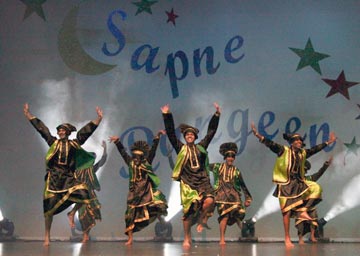 Around 1,500 people packed the Georgia World Congress Center on Saturday, April 17, for a show that has continued to grow over the years. This year thirty teams tried out for thirteen spots in the college cultural show that included students from Georgia Tech, Georgia State, UGA and Emory.

Pulse (GSU & Ga Tech) performed a classical fusion dance in a very elegant style. Siddharth Kelam surprised the audience with an amazing classical Barathanatyam solo in the middle of the dance.

The GT Senior ’10 said good bye to the graduating class with its “ GTea Party.” UGA’s Champa and Chameli performed and had a surprise singer/dance combination when one of the dancers sang part of the song while the other performers danced. Tufaan (Ga Tech & GSU) concluded the show with an Alladin/genie theme to several new hits.

According to Nisha Palvia, one of the India Club co-presidents, “ Sapne Rangeen” took almost a year to plan. One challenge was “getting organizations to sponsor our entirely student run show.” Another was the last minute cancellation of the special guest artist, Imran Khan, who had “a bad accident merely 2 weeks before the show,” says Palvia. However, the committee should be lauded for arranging for “crossover” singer Raghav.