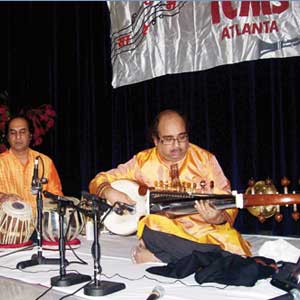 Music lovers of Atlanta gathered to hear a concert by Tejendra Narayan Majumdar, the Grammy nominated sarod player. His two and a half hour concert was at the Student Center Theatre at Georgia Tech on Sunday evening, April 29, 2012. Accompanied on tabla by Arup Chattopadhyay, Pandit Majumdar gave a soulful rendering of melodious ragas. The concert was organized by the Indian Classical Musical Society (ICMS) of Atlanta under the leadership of Dr. Sham Navathe and members Kakali Bandyopdhyay, Shekhar Pendalwar, and Aruna Navathe. Pandit Majumdar was on a 37-day U.S. tour.

Clad in a peach embroidered silk kurta, black churidar and a black stole draped on his shoulders, Pandit Majumdar captivated the audience with the fascinating display of his fingers on the sarod. His performance of raga Mishra Pilu during the second half of the concert transported the spectators into the bhakti atmosphere with his fingers moving with dexterity on the strings, presenting the bhajans “Vaishnav Jan To Tene Kahiye Je, Peer Parayi Jaane Re” and “Raghupati Raghav Raja Ram, Patit Pawan Sita Ram.” Earlier he played Alap Jhor and Gat in Raga Marwa.

Majumdar is from the Senia Maihar School of Music, whose most notable exponents are Ustad Ali Akbar Khan and Pt Ravi Shankar. After eighteen years under the tutelage of Ustad Bahadur Khan, during which time he won various awards, he later trained under Ustad Ali Akbar Khan.

A disciple of tabla maestro Pt. Shankar Ghosh, Arup Chattopadhyay, too, gave an excellent account of his hand work by cutting out gem-like syllables of rhythm and blending filigree on the right hand drum with the depth of the left one.

Pranab Lahiri, an art lover from Atlanta remarked, “I enjoyed watching Pt. Majumdar’s concert immensely. I am in Atlanta since 1976 and had the privilege of witnessing Panditji’s concert way back in the 1980’s in Augusta where he had performed as a young tabla player and had accompanied another artist.”

During an interview, Pt. Majumdar revealed that he had been nominated for the Grammy Awards last year for his composition for an album, “Soul Call—Om Namoh Narayanay,” sung by Chandrika Krishnamurthy Tandon. “In the Fall of 2012, I will be in New York working with [this same] singer,” he said.

Replying to a question as to which place he got the maximum response, Pt. Majumdar said he enjoyed performing in Canada and the USA where audiences have ample knowledge of classical music on account of his Guru’s and Pt Ravi Shankar’s contribution in popularizing Indian classical music by means of their concerts over the last 55 years. On being asked if he planned the sequence of the ragas to be performed before a concert Majumdar categorically stated that nothing is preplanned. “I play a raga based on the mood of the audience and the atmosphere in the theater. We are prepared to make the audience happy.” When asked as to with which tabla player he enjoyed performing the most, pat replied the maestro, “I have had the privilege of performing with all the maestros like Pt. Krishna Maharajh, Zakir Hussain (playing with him for the last 15 years), Shankar Ghosh, and Swapan Chaudhri, and I enjoy performing with all of them.” He attributed his success to the teachings of his Guru and the blessings of the Almighty.

Majumdar said that sarod has a great future, and his disciple Pratik Srivastava is a bright and outstanding student who is currently performing at a concert in France.

During another tête-à-tête before the concert, tabla player Arup Chattopadhyay mentioned that he and Pt. Majumday trained together since childhood in Kolkata.

The breathtaking concert was organized in cooperation with Aarohi, the student organization of Georgia Tech supporting Indian classical music.