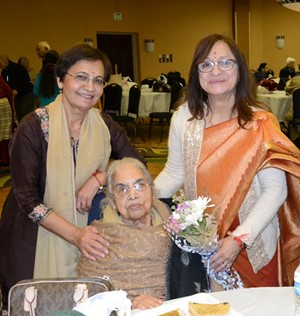 I always wondered why the Senior Citizen’s Program (SCP), since its inception way back in 1996 traditionally starts its year with “Mata Ki Chowki.” When I posed this question directly to the organizer/Executive Director of SCP, Raj Razdan, she explained, “The north Indian ritual of Mata (trinity of goddesses Durga/Lakhsmi/Saraswati) ki Chowki signifies neutralizing the darkness of Kalyug (which we reportedly are in according to the Vedic calendar) with yagya (sacrifice, devotion, worship, offering, bhajans, singing, etc.) and jagran (all-night vigil) cleansing by the devotees for the launch of an auspicious and hopefully a trouble free New Year!” She continued, “Since we are here in a hotel environment with fire hazard issues, we focus on devotional bhajans, japa (mantra repetition), pooja, aradhana (worship) with a pure heart invocation of the Mata Ki Chowki.”

Mata ki Chowki can be done at any time on any occasion by anyone. The SCP got off to an auspicious New Year start with a spirited and joyous Ganesh Poojan followed by the traditional lighting of the jyot at the Garden Plaza in Norcross on Sunday, January 14, 2018. 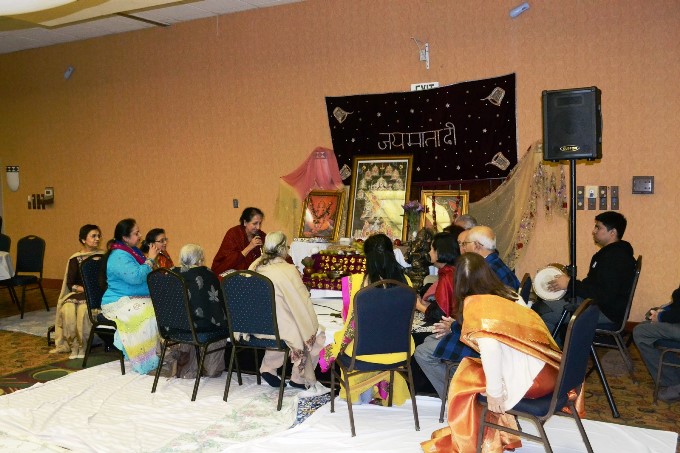 Mrs. Rewa Handa conducting the puja, with Nikhil Sharma on dholak at the right side.

The gracefully decorated stage with diyas (lamps), stringed lights, fresh fruits, and prasad (offerings) wore a festive look in its ornate finery with Mata’s dazzling framed picture in the center of the puja platform, with colorful fresh flower garlands, together with pictures of Lord Ganesh and Lord Shiva.

After warm welcome and good wishes for the New Year, Raj Razdan invited Mrs. Rewa Handa to take charge of the Mata ki Chowki in glory of Goddess Durga. 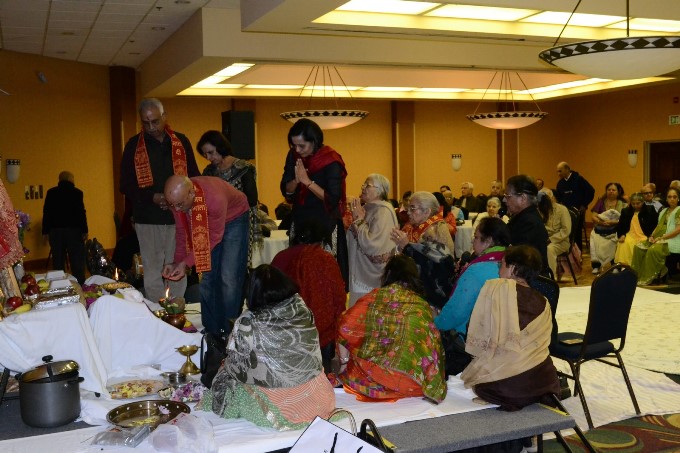 Pooja by sponsors Ashok and Poonam Datta, and Jagdish and Santosh Shailly.

Rewa Handa along with members of her group, invited the sponsors Jagdish and Santosh Shailly along with Ashok and Poonam Datta and the SCP Yajmana Rohitbhai and Shardaben Patel to perform the puja rituals, starting with sankalp and followed by avahanam (invitation) to divine Mataji (Sherawali Ma - who symbolizes the holy trinity of goddesses Durga, Lakshmi, and Saraswati), then Ganapati Puja, (worship to the remover of all obstacles), Lord Vishnu Puja, Nava Graha Puja, and Lord Hanumanji Puja. 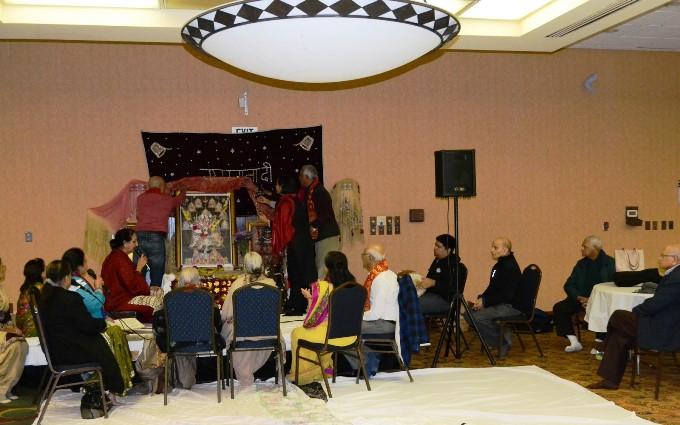 Draping of the chunari on Mataji by Ashok and Poonam Datta and Mr. Shailly.

This was followed with jyot ceremony, garlanding and draping of the chunari on Mataji in reverence. 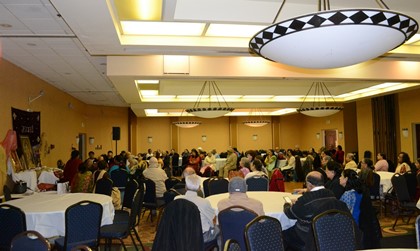 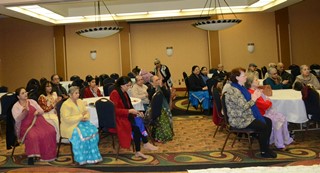 Seniors at the gathering.

The singing of bhajans by the gathering accompanied by clapping and hypnotic beats of the dholak by young Nikhil Sharma and cymbals by Rithu Lalwani generated uplifting spiritual vibes. While the pujas were going on, Raj Razdan and Balwinder Kaur went around the hall tying red sacred thread and applying tikka to the attendees.

The congregation sat in rapt attention listening to melodious bhajans (divine songs) and praises of Mataji in mellifluous voices by Reva Handa, Kshama Kakade, Rithu Lalwani, Shardaben Patel, etc. As the fervor picked up with clapping and singing, the congregation joined in the rousing chanting of popular bhajans by the Chowki group. 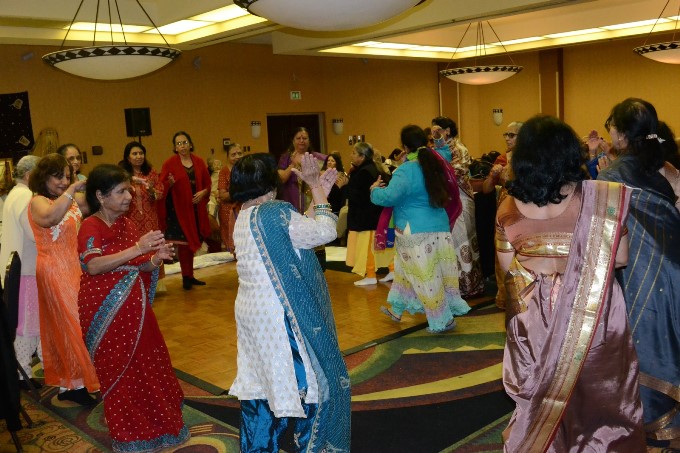 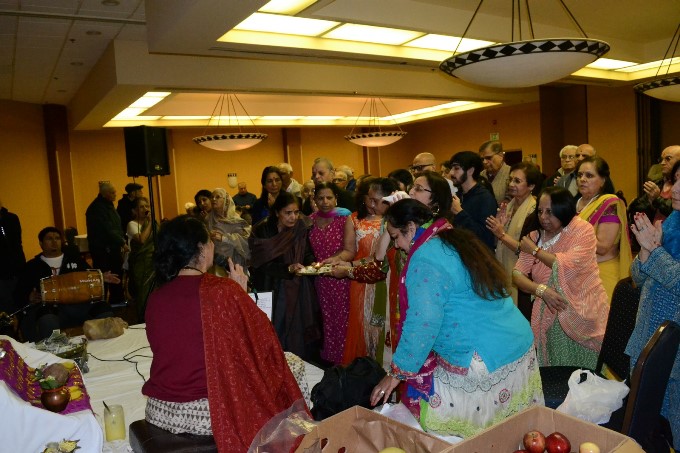 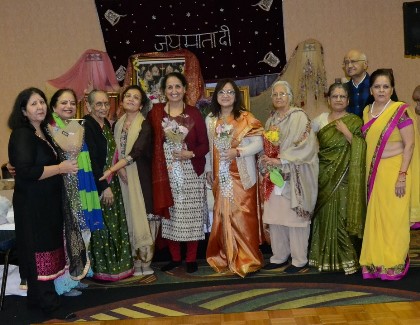 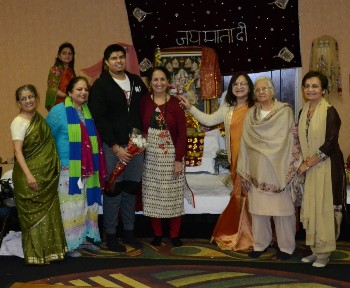 Sponsors were presented with bouquets, and a delicious lunch, catered by the sponsors, was served to all who braved the unusual Atlanta January freeze!

Donations were split between the Vedic Temple of Atlanta and St Jude’s, a children’s cancer hospital.