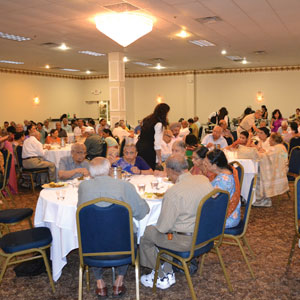 When it was over, all were touched to see seniors leaving the hall with a smile and humming the songs they had been listening to.

Senior Citizen Program Inc. (SCP) presented a grand program at the Ashiana Restaurant, Global Mall, Norcross, on Sunday, August 19, 2012. The Banquet Hall was packed with respected seniors, who had been greeted at the entrance and escorted to their seats by volunteers. The Executive Director of SCP, Raj Razdan, thanked sponsors, Mr.and Mrs. Bhagu Ahuja and Mr. and Mrs. A. Advani. Mrs. Ahuja was presented with a bouquet by volunteer Arunaben Patel, and Mr. Ahuja asked the gathering to bless the upcoming marriage of his son Akash.

As SCP was celebrating India’s 66th Independence Day, everyone sang the national anthem. A moment of silence was held to respect all those affected in the tragic event at the Sikh Gurudwara in Wisconsin and the burning of the mosque in Missouri.

After volunteers served snacks, John MacDonald got the ball rolling. Amritsar-born John grew up in Chandigarh. He has been influenced by Punjabi folk songs, and Sufi-style singing. In late 80’s he formed a Western band called c-Boyz, joined by Bollywood playback singer Krishna Beura. John came to the US in the 90’s and was drawn to Bollywood music. In 2008, he made his first album with playback singer Alka Yagnik, which was released in the UK in 2009. Besides desi genres, John sings gospel music. John said, “Like me, many of you have come here from abroad, so I feel this song will resonate with you,” and he began the nostalgic “Aye mere pyare watan” from Kabuliwala.

Anand Srinivasan from Mumbai is a singer, songwriter, and performer. Trained in Carnatic classical vocals, Western classical, and Italian classical opera, he was voted Atlanta Desi Idol 2009. Since then he has written, sung, and co-composed two original songs, “Tum jo nahin” and “Din hai naya.” Anand captivated the seniors with his first song “Yeh mera prem patra padh kar” from hit movie Sangam. Many seniors reacted with appreciation to his singing.

Lakshmi Rao’s mother was an excellent singer, and her father composed music for Tamil dramas and was a veteran harmonium player—but it was her husband who encouraged her to perform. She has accompanied Nitin Mukesh in 2002 and other playback singers in India and Atlanta, e.g. Tanweer Mian and Azhar Mehmood. Lakshmi sang the catchy song “Aaiye meherbaan” (Movie Howrah Bridge) and others.

John with his zestful spirit sang a few more popular oldies and at the request of the seniors set the floor on fire with Daler Mehendi’s ever popular “Bolo ta ra ra.” The song with throbbing, high-octane music immediately got a few seniors dancing on the floor! 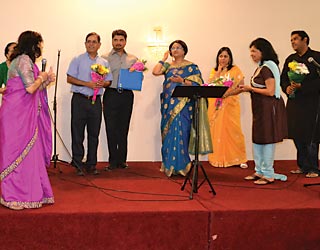 Bouquets in appreciation to the artists.

Singing of old Bollywood gems continued during lunch, and then Anand led the singing of “Happy Birthday” for senior Padma Shah, sponsor Bhagu Ahuja, and all those with August birthdays. A delectable pineapple cake was cut for the happy occasion.

The talented singers engaged the audience with their cheery and infectious enthusiasm and light-hearted remarks. Songs are enriched by good music: Rohitbhai Patel was thanked, and Ram Narayan Singh of the Dhwani Group.

Mansukhbhai Shroff requested everyone to say the sloka of Krishna, Om Sri Krishnan Sharanam Naama, nine times for peace and prosperity. He thanked all for making the Independence Day celebrations enjoyable and memorable.