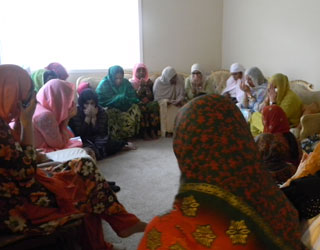 The Islamic teaching about treatment of women is highly misunderstood by many. Western women generally view Muslim women as repressed and deprived of their rights. The media portrays the stereotypical Muslim woman as fully covered and dominated by her husband. It may be amazing to find that for 1400 years Muslim women have been enjoying rights for which Western women are still struggling.

The women’s auxiliary of the Ahmadiyya Muslim Community GA chapter held the Seerat-un-Nabi to commemorate the life and exemplary character of Prophet Muhammad who conferred these rights upon Muslim women. The event, held on Sunday February 5th, 2012 was an informal setting. Twenty three Muslim women from different countries, such as Pakistan, Bangladesh, India, Canada, Morocco and America, attended.

Ayesha Khan, a member of the women’s auxiliary, gave a speech on the topic of the “Holy Prophet: Liberator of Women.” She stated, “The time is not distant, however, when the world will accept the guidance coming from the Holy Prophet in these matters as it has already been done in others, and then what the Holy Prophet initiated on behalf of the freedom of women will bring forth its fruits to the full.” Another member, Attia Waheed, recited the Qaseeda , a poem in praise of the Prophet and a third member, Bushra Qamar, recited verses from the Holy Quran.

After the program, the women shared some Ahadith, sayings of the Prophet and some inspiring incidents from his life. Later, the women enjoyed dinner and were given a chance to enter a drawing to receive the magazine Review of Religions published by the Ahmadiyya Community. Having such a gathering gave the women a chance to feel united, regardless of their cultural backgrounds.