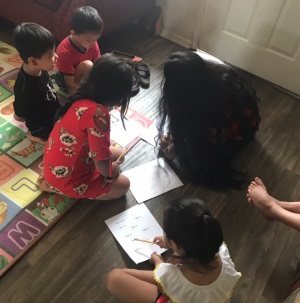 An intern with kids during one of the days of tutoring.

After a period of six weeks, the 2019 Sewa International Summer Internship ended on July 20th. It was not only an intensive but also a rewarding experience, to say the least, for all stakeholders involved—volunteers, interns, and all the Bhutanese kids who were being tutored as part of the internship process.

This year the internship program had been broadened:there were two broad categories of internships available, one, as in previous years, with the responsibility of tutoring kids from the Bhutanese community in the Clarkston area of Georgia, and the other new one in which five interns in collaboration with Stone Mountain High School would design surveys, collect data, and analyze it with the aim of understanding the perspective of students and their guardians/parents on what services the school can incorporate in order to meet multiple objectives: increase graduation rate, get parents involved in the students’ academic activities, and last but not least, prepare students for after-school life. 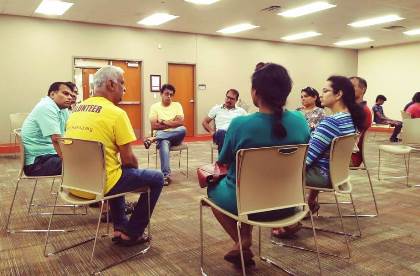 The background work (Advertisement, Promotion on social media, and Interviews) for both the projects of the internship program started as early as three months prior to the start of the actual internship. Sewa volunteers visited different apartments where members of the Bhutanese community reside to conduct the first round of on-boarding process, and also met with the principal of Stone Mountain High School multiple times. After conducting multiple conference calls explaining the work involved with the selected interns, the internship finally kicked off on June 10, 2019.

While the interns involved with the surveys started with the rigorous process of designing sound survey instruments, those involved with tutoring started going door-to-door recruiting kids and explaining to their parents how kids would benefit from Sewa’s free tutoring classes. Kids who opted for tutoring sessions improved their skill in Reading, Writing, and Mathematics and also gained confidence from interactive sessions with high-schoolers. Most of the kids were from elementary schools and middle schools, with varied backgrounds, including but not limited to Nepalese, Bhutanese, and Burmese. To have fun-filled learning experiences, interns also regularly played games and demonstrated basic science experiments. Throughout the internship process, the kids’ attendance was fairly stable with about 25 kids turning up on a regular basis and 11 interns paying them undivided attention. It was a fun-filled and great learning experience for the interns—especially on how to be patient, how to teach effectively, and how to deal with kids. 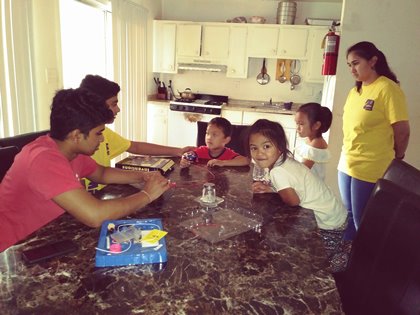 Interns demonstrating a science experiment to kids during tutoring.

By the end of the first two weeks, the other group of interns, who were working on the surveys, had the instruments ready. It was a commendable job given that the survey instruments required being able to address all the objectives, have reliability and validity, and be succinct as well. Overall, there were five iterations before being sent to the principal of Stone Mountain High School for approval. The next phase of data collection involved interns visiting areas around Stone Mountain High School with electronic devices for potential respondents. The target pool of respondents were those children who attend either Stone Mountain High School or any middle school in the area (and who are likely to attend Stone Mountain High School in the near future) and their parents. The process involved visiting apartments, explaining the purpose of the anonymous surveys and then getting them filled. It was not an easy process. Throughout the process, the interns got first-hand experience on the process of data collection for surveys. They learned plenty about surveying and on how to properly acquire unbiased statistical data. After multiple days of the data collection effort, the interns were able to collect more than 30 responses from respondents belonging to diverse racial backgrounds. 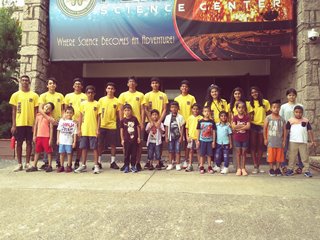 The interns also developed a plan for a field trip for the participants to Fernbank Science Center which was to be followed by a closing ceremony at a temple of the Bhutanese community of Georgia. Appropriate plans were made for the logistics of the entire process. On July 20, 2019, the field trip started by picking up the kids from their apartments in the morning followed by a tour of Fernbank Science Center. 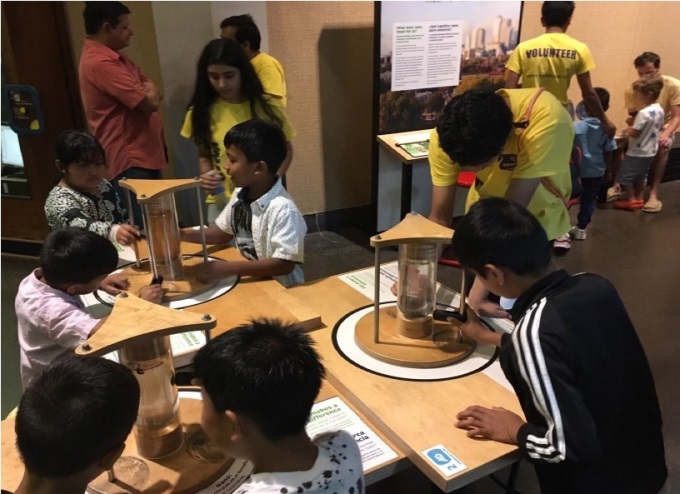 Interestingly, the day of the field trip coincided with the first ever human landing on the moon back in 1969. The location was specifically chosen to complement the tutoring process, invoking curiosity for history and science among the kids. The tour lasted for two hours and included a short film on the history of the first ever moon landing and the following missions. 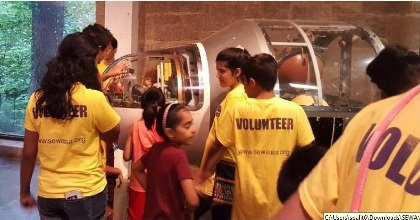 The tour was a huge success. All the kids were really excited during the trip. Not only were they thrilled to be able to see and understand the exhibits (thanks to the sincere interns), they also tried different science experiments that were on display. The tour concluded with a delicious lunch, including desserts.

The trip was followed by a concluding ceremony at the Temple of the Bhutanese Community of Georgia in Clarkston, Georgia. The ceremony was conducted by senior Sewa volunteers, wherein the interns shared their experience during the course of the internship. They also demonstrated, along with the specific kids they were mostly attached to during the process, what improvements (academically or otherwise) their tutoring had brought. For example, some kids did not understand fractions prior to the tutoring—now they do, some kids were not very good at reading—now they are better, and so on. 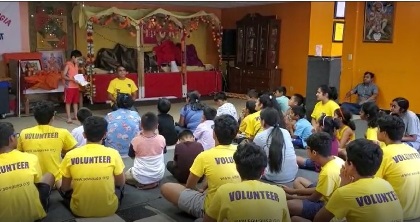 Recitation of Shanti Mantra during closing ceremony at Bhutanese temple.

The kids also recited the Shanti Mantra which they learnt from the interns. The Shanti Mantra is a secular verse recited for universal peace and prosperity. The concluding ceremony was a clear testimony that not only did the internship process result in academic improvement of the kids, but also proved to be effective in building confidence in both the kids and the interns to a great extent. 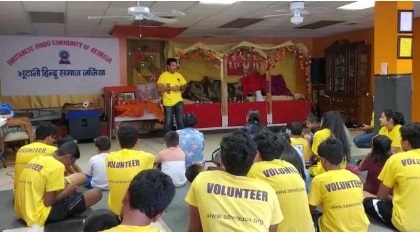 A Sewa volunteer sharing his experience.

Sewa volunteers, who assisted and coordinated the entire internship process right from preparation beginning in January till the end of the internship, also shared their experiences along with some words of advice for the future. 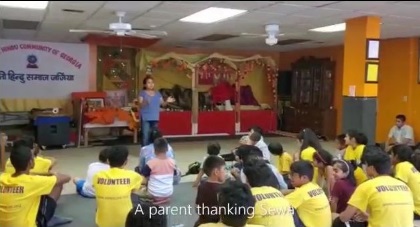 A parent thanking Sewa during the closing ceremony.

One of the kids’ parents, Uma Mandal, who accompanied during the field trip, expressed her thanks and gratitude to the entire Sewa team for the successful completion of the internship and urged them to continue this next year. It provided a sense of satisfaction to all Sewa volunteers as well as the interns.

Overall, the 2019 Summer Internship organized by Sewa International (Atlanta chapter) proved to be big success. It not only proved to be a learning experience for the interns and the kids but also added another milestone in furthering Sewa’s goals of empowering the Bhutanese community in the U.S. as a whole and iin Atlanta, in particular.

[The article above is a Website Bonus Feature, appearing only on the website for October 2019, not in the print/digital issues.]