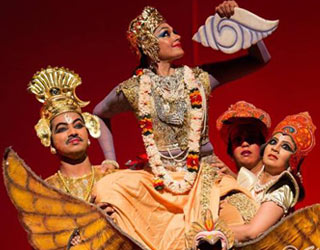 Freedia Entertainment, in association with AAA Entertainments and Ekal Vidyalaya, presented noted Padma Shri and National Award winning danseuse and leading South Indian actor Shobana and her troupe Kalarpana in a dance drama–– Krishna––directed and choreographed by the artiste herself. Staged at the Lassiter Concert Hall in Marietta, Georgia, the sold out show was graced by the presence of Chief Guest Dr. Nazeera Dawood, Program Manager at Fulton County Department of Health & Wellness.

The show was sponsored by Charter Global, Orion Systems, media sponsors and food sponsors; their generous support, which has enabled the organizers to support Ekal Vidyalaya, was warmly acknowledged by Sunitha Freeman.

Krishna was first performed on 22nd August 2011 in Chennai, India on Janmashtami (Lord Krishna’s birthday). The English version of the dance drama performed in Atlanta was conceptualized and choreographed by Shobana after long years of research, training and practice. Shobana essayed the lead role of Krishna, accompanied by 16 artistes including her daughter Narayani. 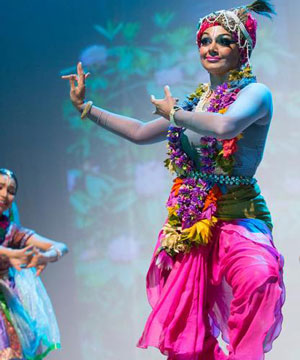 In a radical departure from convention, Krishna was a medley of varied dance forms ranging from the classical tradition to popular Bollywood film dances. The performance was comprised of well-known episodes from Krishna’s childhood and youth to stories from the Mahabharata. In the grand finale, Shobana’s depiction of Krishna appearing before Arjuna as “Virat Swaroop” received a resounding ovation. The perfectly coordinated dances, executed with grace and agility were a visual feast. Multi-hued costumes and ornate dance jewelry enhanced the dancers’ intricate footwork and expressive features. It was poetry in motion!

Though the story of Krishna has been retold in several languages, this is the first full-fledged song and dance performance on the deity in English. The sound mixing has been done by Oscar winning sound designer and editor Resul Pookutty. Another distinction––the voiceovers for the characters have been rendered by some of the best known film actors from Indian cinema: Surya for Arjuna, Konkona Sen for Radha, Shabana Azmi for Gandhari, and Shobhana for Draupadi.

Ekal Vidyalaya––represented by Kiran Kodithala, two Ekal volunteer children, and several volunteers––spoke about their foundation, a non-profit which works for holistic development of rural and remote tribal villages in India by providing functional education that includes basic literacy, health and hygiene, economic development and social empowerment. Today, 53,125 Ekal schools, each running on an annual donation of only $365, provide basic education to nearly 1.45 million students, half of them girls. 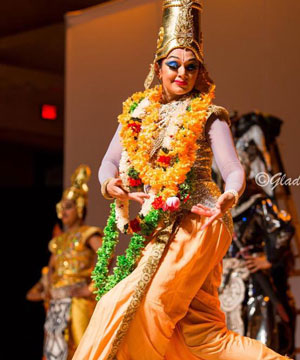 The Chief Guest Dr. Nazeera Dawood, Program Manager at Fulton County Department of Health and Wellness felicitated Shobana with a shawl. Besides congratulating Shobana and her troupe on their stunning performance, Dr. Dawood appealed to the gathering to participate in civic engagements and promote unity and peace.