Holi, a traditional Hindu festival, celebrates the beginning of spring as well as the triumph of good over evil. It is best known around the world for the powder that revelers throw on each other, leaving festivalgoers coated in color. Indian Friends of Atlanta (IFA) organized a spectacular Holi for the first time on March 11, 2017 at the huge ground in Skyland Business Centre. More than 600 members of the Indian community and other Americans thronged to the venue to enjoy the celebrations.

Guests of honor, Consul D. V. Singh and a few prominent leaders in Georgia, graced the event. The decorated stage with Indian and U.S. flags and a great sound system made an impression on the audience.

DJ Ameet rocked the event with his electrifying music, and the crowd was dancing to his tunes throughout the event. At the same time photographers from Vakiti Creations and Divya Desai – PixelCollectionPhotography were busy capturing the pictures and videos using cameras and drones. 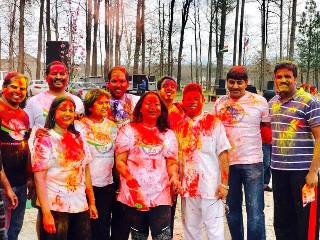 Covering Consul and all in color!

Food vendors Bawarchi Biryani Pointe and Sanjha Chula were on site with a live cookout of delicious Indian foods, Raja Foods of Patel Bros served sugar cane juice and thandai, Suvidha Groceries provided organic colors which were safe for the environment and kids. 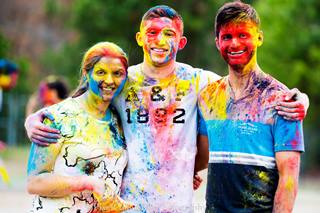