Stand with My Muslim Sister 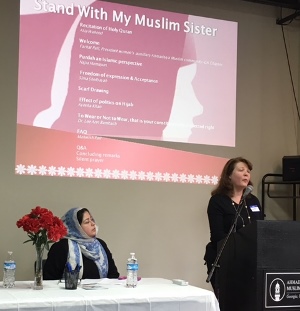 In an effort to build bridges, promote sisterhood and acceptance, the women’s auxiliary of the Ahmadiyya Muslim Community, Georgia Chapter organized a successful event called “Stand with My Muslim Sister” on February 20, 2016 at Baitul Atta Mosque, Norcross, Georgia. Women of different faiths were invited, and the event shed light on the purpose of the hijab for Muslim women and its value in Islam.

Speakers talked about the personal meaning of hijab, its religious perspective, and addressed many of the misconceptions regarding hijab. It was emphasized that the hijab is a form of self-expression rather than oppression, and it is worn solely to please God. The major area of the talk was eradicating the misconception that women are forced to wear a hijab. Another question that the audience asked was, “Aren’t you hot in that hijab?”

The highlight of the event was when the non-Muslim guests tried the hijab on to show support and acceptance for Muslim sisters. The event concluded with a question/answer session. One of the most enlightening answers explained that the Qur’an only specifically asks women to cover their heads and their bosoms, and wear loose clothing so that their bodies are not visible to strangers. “Burqa” and other forms of hijab are cultural adaptations of the Qur’anic commandments. 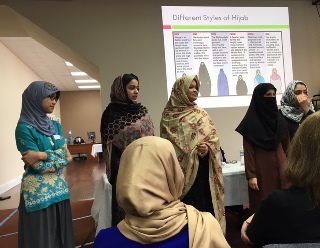 This event was not only the celebration of the “Hijabi Muslim” women but rather it was the celebration of tolerance and acceptance that our society has in this country. This event brought attention to the fact that we have come far from the era of discriminations and judgements, and we have learned to embrace the differences. This event gives the Muslim women satisfaction that we are seen much more than what is on our head, and that our American sisters stand with us.

[The article above appears only on the website for April 2016, not in the April print/digital issues.]