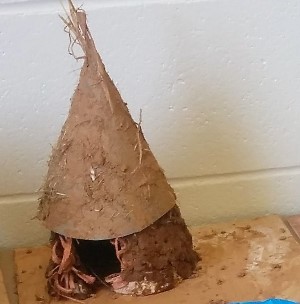 (Left) A model of a tribal mud house using the ancient eco-friendly “wattle and daub” technique.

Balvihar Hindi School, Atlanta, run by World Hindu Council of America, Atlanta Chapter, successfully conducted its 7th Startalk Hindi Camp from June 2 to 24, 2017 at Lakeside Middle School, Forsyth County, GA. The 96+ hour Hindi instruction camp is federally funded and incorporates the latest and most innovative techniques of teaching a foreign language. Students learn Hindi through a variety of activities, projects, stories, arts, and crafts. The curriculum incorporates STEM, and students learn to explain scientific facts in Hindi. This year, for the first time, the camp had a week-long online learning component that prepared the students for the 12-day face-to-face camp. The goal of this annual camp is to teach students to speak, read, write, and comprehend Hindi, using the language immersion experience. For the entire time spent in the 12 days, students are exposed to spoken and written Hindi, as well as Indian culture, from authentic desi cuisine to Indian sports like kabaddi and kho-kho.

The theme for this year was the eco-friendly lifestyle of the tribes of India. Students explored the habitats, livelihood, art and crafts, and festivals of the tribes, and learned about their love and respect for Mother Nature. They compared their own city life with the tribal lifestyle and came up with suggestions to make city life more eco-friendly.

The students were classified according to their Hindi language proficiencies, starting from novice learners with little or no knowledge of the language, to higher level students who could discuss and debate various issues in Hindi. While novice learners learned facts about the Gond tribe of Bastar in simple words and sentences, the advanced students debated if the tribes should be segregated to preserve their traditions, or brought into the mainstream society, to ensure their progress and prosperity. They discussed the infamous “Trail of Tears” of the Cherokee Indians and the impact it had on the tribes. 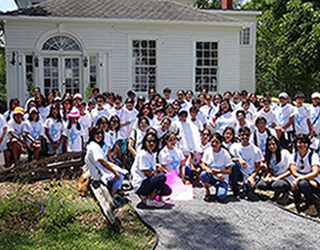 During the field trip, students visited a Native American history museum, “The Chieftain’s Museum,” and got a chance to interact with some Native Americans and hear their side of the story of their displacement. Students were also made aware of the Cherokees’ ongoing efforts to preserve their language and culture, which was a great example of people taking pride in their heritage and keeping it alive it for future generations.

As the camp progressed, students “visited” different regions of India and learned about the Bishnoi tribe of Rajasthan, the Bodos of Assam, and the Gond of Bastar. They heard how the Bishnoi women sacrificed their lives to save their beloved trees. They saw the Bodo living in tune with Mother Nature and watched the ancient technique of bell metal art or dhokra of Bastar, one of the earliest known methods of metal casting. This craft dates back to prehistoric time of Harappa and Mohenjo-Daro period of Indus Civilization. 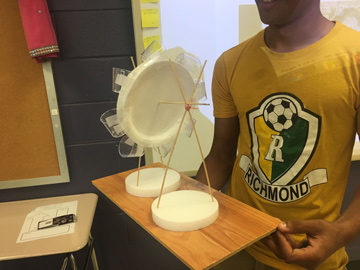 (Left) One of the projects for the Environment & Science Club.

The camp curriculum was designed to give students ample opportunities to employ the language in meaningful ways. Apart from activity based learning during classroom sessions, students took part in three different clubs: Arts & Crafts Club, Environment & Science Club, and Food Club. Students made a variety of products, ranging from dream catchers to tribal mud houses using the ancient eco-friendly “wattle and daub” technique in which first the frame is made of bamboo wood, then vines are woven through the frame, followed by a layer of mud and grass.

Students also made jet toy cars powered by a balloon and a working model of a water wheel. The language component was expertly woven into these activities. Depending upon their proficiency levels, students listed the steps or described the process to make their products, and students with more language learned and got to explain the physics behind these products in Hindi, namely Newton’s third law of motion, and the concept of kinetic and potential energies. The scientific Hindi language uses mostly Sanskrit terms, and the purpose of including STEM in this camp is to showcase the power of the language to lend itself easily to scientific communications.

During the Food Club, students tried their hand at making shikanji (fresh-made lemonade) from fresh green lime. They not only learned the recipe, but also read about the nutrients and health benefits of the foods they were preparing. They soaked and sprouted green moong dal to make moong chat as a healthy afternoon snack. It was a delight to see kids cutting tomatoes and onions with plastic knives! The chana jor garam chat was an especially authentic Indian treat. The kids even rolled up newspaper pieces to make cones in which the chat was served, just the way it is served in India. Quick to notice the eco-friendly and cost effective use of newspapers as plates, one of the kids remarked, “That is smart!” Judging by the taste of the snacks made, there were quite a few budding master chefs in the crowd! Last but not least, to meet the language learning goals, students made up slogans and jingles about the foods and competed against other classes.

A new initiative this year was the introduction of story hour in the daily schedule. This year, the Indian Consulate in Atlanta generously donated close to 500 Hindi story books to Balvihar Hindi School. These books were used to stock the Startalk camp library. Students could choose colorfully illustrated Hindi story books to read, or have their teacher read to them. Alternatively, given a story starter, they made their own stories. This was a fun activity that kids really enjoyed. They also played various language games that helped build vocabulary and grammar. A variety of activities kept students meaningfully engaged throughout the day.

An all-time favorite of all returning as well as new students was the Indian sports hour, where they got to play kabbadi, kho-kho, etc. Another hit was the authentic Indian food served during lunch. The menu was carefully planned to give campers a taste of the Indian region they were learning about. The Indian-American kids growing up with pizza and pasta loved the Indian food, much to the surprise and delight of both parents and teachers. The fun of the tasty food was enhanced by the screening of popular Hindi movies Dangal and Dhoni during lunch time. The inspiring movies mesmerized the kids.

The camp concluded with an exhibition and cultural show. All the projects built during the camp, including samples of the writing by students were displayed for parents to view. Students got a chance to explain their work to family and friends and show off some of the Hindi they learned during the camp. Kids wrote their own dialogues for plays they enacted in front of the most appreciative audience.

The Startalk Summer Hindi Camp is a highly popular annual program among Indian community of Greater Atlanta area. All of the teachers, who also volunteer as teachers at Balvihar Hindi School of Gwinnett and Cobb County, worked really hard to make the camp a meaningful and fun educational experience. A team of volunteer high school students worked through the entire camp for the smooth running of the camp and helped the food coordinator get breakfast, lunch, and snacks to everyone in a timely manner. The young college students, who worked as Teacher Assistants, played an important role in the students’ learning.

The success of this program depends as much on the dedication of the organizers as on the committed parents who keep bringing their children to this camp, and recommending the program to other families. The consistent, positive feedback from students and parents has filled the Balvihar Startalk Hindi team with enthusiasm to be back next year, with new and creative ways to teach Hindi.